Holder Pasteurization Has Limited Impact on the Nutrients in Human Milk 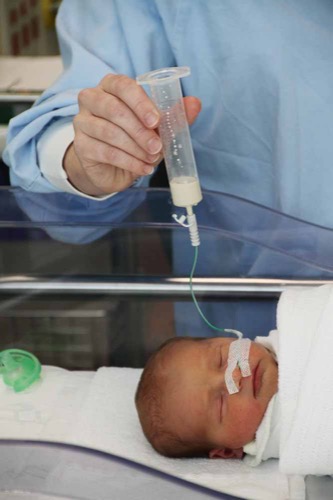 Holder pasteurization, or HoP, is used the world over to help ensure that the milk distributed by human milk banks is safe for infants to consume. Thanks to its broad effectiveness at destroying a long list of bacteria and viruses—including HIV and Ebola—HoP is recommended by the World Health Organization and the American Academy of Pediatrics. But does raising the temperature of human milk to 62.5°C for half an hour break down any of its constituents such that the nutritional content of milk is affected? This second article in a five-part series about HoP finds that the evidence on this topic is relatively thin: different methods of evaluating the composition of milk have frequently led to different conclusions. Overall, however, even though some studies indicate that several vitamins, iron, fats, and certain proteins can be altered by HoP, researchers rarely consider the nutritional changes to be clinically relevant.

There are several micronutrients for which evidence of a change resulting from HoP is unequivocal. Vitamin C, for example, has repeatedly been shown to be destroyed by HoP, whereas vitamins A and E are thought to be better retained [1]. But the data are less clear for some other vitamins. For example, several studies show HoP-induced reductions in the B vitamins, while others do not [1].

Last year, Fabio Gomes of the University of Queensland, in Brisbane, Australia, and his colleagues, used liquid chromatography and mass spectrometry to analyze the concentrations of vitamin D compounds in human milk before and after pasteurization [2]. They found that various vitamin D compounds were affected—vitamin D2, D3, 25(OH)D2 and 25(OH)D3—with losses due to pasteurization in the 10%—20% range. Whether this could have any impact on infant health is little understood: while vitamin D’s importance in the regulation calcium and phosphate absorption in the intestines is well established, the vitamin D requirements of pre-term infants, who often receive milk-bank milk, are not.

Some of those same Brisbane-based scientists also contributed last year to a paper about the impact of HoP on the mineral content of milk [3]. Again using mass spectrometry, they found no evidence for alterations in the amount of the trace elements zinc, copper, selenium, manganese, iodine, molybdenum, and bromine. The iron content of milk did decrease by 6.5% after HoP—a statistically significant shift—but this loss is not thought to be problematic for premature infants. Authors Nor Mohd-Taufek and her colleagues do not recommend milk supplementation with iron as a matter of course.

Sugars in milk appear to hold up well to heat treatment and storage. This is the conclusion of a recent review that evaluated the evidence around changes in the amounts of lactose and glucose—as well as glycans such as glycosaminoglycans and oligosaccharides [1]. The summary of 44 papers, which all measured changes in human milk’s composition before and after pasteurization, was written by the University of Turin’s Chiara Peila, and a team that is spread among various Italian institutions. The concentrations of the vast majority of the carbohydrates investigated did not change. When it came to glucose, however, different studies have found its concentrations to increase, to decrease and to remain constant after HoP.

Fats in milk store much of the energy that powers infant wriggling, smiling and crying. Crucially, they also help premature infants put on weight. Hence any reduction in the fat content of donor milk could have important consequences for choices around milk supplementation. (As it is, mothers who donate milk have generally been lactating for a while, and as a result, produce milk with a lower energy content than newer mothers [4].)

Two studies have addressed the question of whether HoP alters human milk’s fat content, with one by Ley et al. [5], which relied on bomb calorimetry, reporting no change, and another by García-Lara et al. [6] noting a decrease. García-Lara’s team used infrared spectrometry to analyze 34 samples of donated milk from 28 donors to the Hospital 12 de Octubre in Madrid, Spain. They report that pasteurization followed by freezer storage for 180 days resulted in 6.2% decrease in fat and a 5% decrease in the energy content of milk, respectively. Of the 6.2% decrease, 3.5% was the result from HoP, and the remainder (2.7%) was due to storage.

The argument that the process of freezing and thawing might influence pasteurized human milk’s fat content is also backed up by work by Alan Araujo Vieira and his colleagues at the Fernandes Figueira Institute, in Rio de Janeiro, Brazil [4]. They report a 5.5% reduction in human milk’s fat content following pasteurization and a huge further reduction of 56.6% as a result of continuous infusion delivery (one of the two main ways of delivering milk to infants who cannot suck). Vieira and his colleagues suggest the explanation for such a large drop might be rupture of fat globule membranes that could facilitate fats sticking to the walls of the plastic equipment and syringes that are commonly used to feed very young infants.

Research into the impact of HoP on the proteins in milk tends to focus on changes in the proteins’ levels of activity, such as in the immunological functions of some proteins, rather than on the amount of protein available as a nutrient. There are good reasons for this, which will be explored in next month’s issue of SPLASH!®. Perhaps the most in-depth study on the topic, however, combines these two concerns.

In this sense, Cristina Baro at CNR’s Institute of the Science of Food Production, in Turin, Italy, and her team, note that the digestibility (and thus the nutritional supply) of the proteins in human milk can be reduced when some amino acids undergo carbonylation [7]. So they approached the question of the how much nutritionally available protein is present before and after HoP by immunostaining the protein component of human milk with a compound that binds to carbonyl groups. When they compared the carbonylation of one of the most important proteins in milk, β-casein, before and after HoP, they found it little changed (but caseins were somewhat degraded by the heat treatment). Another important protein, lactoferrin, did show considerable difference, however. Because lactoferrin binds iron, its carbonylation during HoP may explain the small reduction in human milk’s iron content that Mohd-Taufek and her colleagues reported last year [3].

Lactoferrin is much more than a building block to be cut up by gut enzymes and reconstituted in the form of infant muscle. It can itself fight germs and is thought to even stimulate infant intestinal development. Check back next month to learn more about how this, and other biologically active proteins in human milk, are affected by HoP.