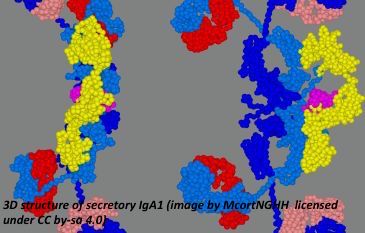 When you heat proteins, you very often ruin their function. This is because bonds that maintain a protein’s final structure start to rupture—that is, segments that have folded and wrapped around themselves, forming a fiddly and exact arrangement in three dimensions, come apart. “Denaturation,” as the process is called, is why Holder pasteurization (HoP)—heating milk to 62.5°C for 30 minutes—successfully removes the potential growth of germs such as bacteria when mother’s milk is stored, as in a milk bank. But in defanging some microorganisms through heating, HoP risks destroying the function of a suite of human proteins in milk that are thought to have beneficial effects on infants’ immunity. This third article in our series on HoP considers how well these proteins survive this type of pasteurization.

Probably the best-known biologically-active proteins in human milk are immunoglobulins, or antibodies, as they are commonly known. Newborn infants have immature immune systems, so to make up for a shortfall in pathogen defense, they arrive in the world with a dose of antibodies received through their mother’s placenta since the end of the second trimester [1]. After birth, human milk provides a boost, supplying many different kinds of antibodies, especially IgA (which, in its dimeric form, is by far the most common antibody in human milk), IgM and IgG.

Given that the specific details of antibodies’ three-dimensional structure are central to how they recognize whatever the immune system needs to rally against, it is unsurprising that HoP reduces their function. Recently, Brodie Daniels of the University of KwaZulu-Natal in South Africa, and her colleagues reported the retention of IgA after HoP as 78.9% [2]. Other investigators who have measured secretory IgA (the dimeric form), and IgA present in colostrum, the yellowish milk produced in the first few days after birth, have also found reductions [3]. These studies were performed using an assay known as an ELISA, which, by measuring how well antibodies bind to a specific target, effectively quantifies how well they are working, as opposed to their mere amounts in a nonfunctional state. As for IgM and IgG, they too have been found to decrease after HoP [3], generally more so than IgA [3, 4].

Lysozyme—a bacteria-busting enzyme present in tears as well as human milk—also appears to be partially destroyed by HoP. Not all studies find this (Brodie Daniels and team being a case in point [2]). Those that do find extremely varied levels of lysozyme’s destruction. Some put its post-HoP functional concentration as low as 20%, whereas others report this to be as high as 85% [2].

Lactoferrin, another important antibacterial protein in human milk, appears to suffer a similar dent in its effectiveness after pasteurization, although the evidence is even more complex to interpret in this case. The protein in question fights bacterial infection through a range of mechanisms, and so researchers have attempted to measure how well it survives HoP in different ways. Some suggest that lactoferrin forms aggregations during pasteurization, rather than HoP fundamentally wrecking the protein’s structural integrity [3]. Other scholars point out that peptides such as lactoferricin, formed during an infant’s digestion of lactoferrin, extend the latter’s bacteria-fighting effects [3, 5]. They, therefore, suggest that lactoferrin’s downstream properties aren’t addressed by simple measures of how much is left functionally available in milk after pasteurization.

In 2011, a team at the University of Alberta, in Canada, set about measuring a suite of these molecules in pooled samples of the milk of 34 women, and once again after the same samples were subjected to HoP [7]. Not all of the molecules they investigated were significantly reduced in the ELISA, although, for example, interferon-gamma, tumor necrosis factor-alpha, and the interleukins 1 beta and 10 all were.

Does that mean that HoP has a net impact on the overall immunomodulatory effect of milk? The answer, unfortunately, is unclear. Some of the affected cytokines tend to be of the type that attenuates the immune response, while others among those apparently destroyed by HoP are understood to have the opposite effect. Moreover, the roster of HoP-damaged cytokines appears to be different in different studies, with Espinosa Maeyos and colleagues in Madrid, Spain, reporting that macrophage inflammatory protein-1 beta and interleukin-7 were affected in samples of colostrum subjected to HoP—but not some of the other molecules tested by the Alberta team [8].

Despite the uncertainties in the details, the fact that HoP has been repeatedly found to alter the activity of various immune proteins in milk has motivated the search for more targeted methods of making human milk safe for storage. Ideally, these would be as effective against germs without the making the active human proteins in milk work less well. SPLASH!® will turn to that topic at the end of this series.