Highlights from the 2019 IMGC Symposium 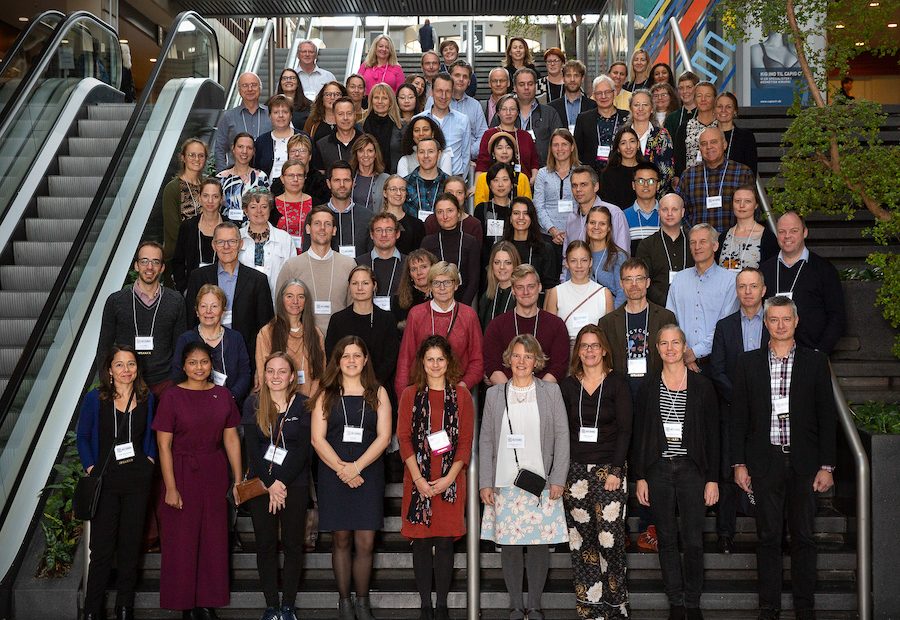 The 2019 International Symposium on Milk Genomics and Human Health, the sixteenth in this series, was held in Aarhus, Denmark, home to Aarhus University and Arla Foods. The local organizing committee designed a diverse and engaging program and provided a warm welcome during a cool Danish November. There was a total of 28 speakers over three days of thought-provoking science, and as always with these meetings, there was a great blend of dairy food science, nutrition, animal science and, this year, the hot topic of sustainability.

Sustainability: meeting the demands of the future

The first day opened with the traditional welcome and inspiration provided by Bruce German (UC Davis) who introduced the first session focused on sustainability. Troels Kristensen (Aarhus University) provided a systematic analysis of the environmental challenges of doubling global production to a half liter of milk per day per person for a future world population growing beyond 10 billion and in need of sustainable food security. He pointed out that to do so and simultaneously meet the challenge of reducing greenhouse gas emissions would require a concerted effort with a combination of new technologies, alternate cow management strategies and diversification of land use. Brad Riddout of CSIRO Agriculture and Food in Australia followed with his recent evaluation of an Australian population dietary survey in the context of environmental footprint. He found that when the study population was divided into four groups based on both diet quality and emissions, those people who fell into the high-quality, low-emissions group were distinguished by the exclusion of discretionary foods and the inclusion of dairy consumption. The next speaker, Monika Zurek (Oxford University), presented an overview of the European collaborative SUSFANS project. Using a system of metrics and modelling, the program examined current and projected food systems to identify how Europe might achieve its goals of sustainable food production, and meet targets of reduced emissions, economic growth and improved health. An example was discussed using 16 metrics for performance in four categories: diet, equity, environment and EU competitiveness. The sustainability theme was wrapped up with a talk from Nina Aagaard Poulsen (Aarhus University) on how sustainable production practices can be employed in producing healthy dairy products. She presented data from a series of studies aimed at reducing the emissions footprint of dairy cows while maintaining milk quality. These studies demonstrate that strategies to alter on-farm emissions can be tolerated without compromising milk quality.

When milk and good bugs get together

The session on the microbiome and metagenome touched on many aspects of milk properties, milk production and human health. A keynote address by Christopher Stewart from Newcastle-upon-Tyne described studies from the TEDDY cohort, a long-term study of development from early childhood. Detailed analysis of gut microbiota characterized three phases: establishment, transition and stable presence of microflora. Breastfeeding was the dominant factor affecting the initial phase of establishing a healthy gut microbiome. Microbiome modelling of 1,000 pre-term infants showed a pattern of instability associated with necrotizing enteric colitis, a key cause of mortality in these babies.

Gut microbiota is also important in dairy cows. Rumen microflora has been studied for many years, but intestinal microflora is not as well studied. This may be of particular relevance to immune development in ruminants, which rely on immunological tissue within the gut for developing antibody producing B-cells. Mikael Niku from Helsinki University discussed his studies of newborn calf microbiota. The talk from Guy Vergeres of Agroscope in Switzerland switched the focus to the metabolome of human subjects consuming dairy products, especially comparing the effects of fermented dairy as yogurt. In general, the studies involved a cross-over design and compared milk consumption to yogurt, and in some studies non-dairy plant-based drinks or foods were included. Whatever foods were ingested, serum or urine metabolite profiles generally reflected the differences.

Each year participants vote on the most valuable presentation (MVP) at the symposium. At this meeting, the 2018 MVP, Dr. Ishita Shah (UC Davis), presented an update on her work with human milk oligosaccharides. Gut health is affected by many factors that influence the capacity of the cells lining the intestines to provide a barrier to pathogens. This talk revealed how human milk oligosaccharides enhance barrier function and protect against pathogens.

Day one ended with the yearly round-up from Danielle Lemay of highlights from SPLASH! milk science update. The most viewed article of the year, with 90,000 hits, was an article on breast milk stem cells found in infant tissues. Dr. Lemay foreshadowed the hot topics for the future, including artificial intelligence for the dairy industry in the context of data-driven decision making.https://milkgenomics.org/article/even-to-the-brain-yes-breastmilk-stem-cells-do-transfer-to-organs-of-offspring/

Structure and function of milk

Day two began with presentations on milk composition and functionality. Debashree Roy from the Riddet Institute in New Zealand presented studies on the comparative digestive properties of milk from different species, including cow, buffalo, sheep, goat and deer. There has been growing interest in alternative dairy products from these species. Some of the main differences in the properties of these milks include fat and protein composition, and differences in micelle and fat globule size. These influence the hardness and formation of a casein-derived curd in the stomach with varying digestibility and physical properties. Jarred Raynes (CSIRO) presented studies on the structure of micelle formation and focused on the effects of genetic variants in caseins. Variation in genes coding for milk proteins not only affects amino acid sequence but also affects post-translational modification, particularly glycosylation and phosphorylation, which can impact physical properties that are important to micelle formation and coagulation properties of the milk. Bernt Guldbrandsten (Aarhus University) continued the theme of genetic variation of milk proteins but with a very different approach. He analyzed variants that were present in the amino acid coding sequence of data from the 1,000 bulls project. A large percentage of more than 3,000 variants identified were attributed to just five proteins. Variation in milk proteins can affect milk coagulation properties and therefore cheese production. Marie-Pierre Sanchez (INRA) presented a large-scale genetic analysis of milk composition with a focus on cheese-making properties. Over 100 functional gene categories were identified with strong links to factors that affect milk composition.

Physical properties and functionality of milk were highlighted in the keynote address by Thom Huppertz (Friesland Campina/Wageningen University). He focused attention on milk minerals and their relevance to micelle formation, and hence milk functional properties. Lotte Bach Larsen then presented an overview of milk proteases. Cathepsins are a particularly important class of proteases that affect digestion of milk proteins and properties of milk, and are also found in cheese. Next, Carolyn Slupsky (UC Davis) presented work on the effects of including milk fat globular membrane (MFGM) preparations in infant formula. MFGM have the capacity to enhance immunological properties of formula, and thereby affect the health and wellbeing of children. Dr. Slupsky was also interested to study whether the inclusion of MFGM affects brain development and cognition. With Swedish collaborators, she found that inclusion of MFGM increased brain development and cognition measurably by 12 months of age. Jan Trig Rasmussen (Aarhus University) presented details on a range of studies dealing with milk exosomes. Exosomes are extracellular vesicles that contain macromolecules, including proteins, DNA and RNA. There has been a particular interest in the RNA content, of which half are microRNA (miRNA). About 2,500 miRNAs were identified in this study, with 57% being similar in bovine and human milk.

Rounding out the session on inherent milk characteristics and functionalities, Daniela Jakubowicz (Tel Aviv Univ) presented the results of a study on the effects of whey protein feeding on post-prandial glycaemia. And Soren Drud-Heydary presented some early studies on characterizing glycosidases in milk. Despite the importance of oligosaccharides in milk, these related enzymes have not been well characterized.

The food matrix: a complex assembly of compounds

Day three began with a keynote address from Michelle McKinley (Queens University, Belfast) and her thorough review of the development and current state of research on the effects of food matrices on bioavailability of nutrients. With a focus on dairy foods, it was established that milk calcium availability is far greater than that of equivalent amounts of calcium in many foods. This is interpreted as an effect of the food matrix. Emma Feeney (UC Dublin) also presented studies on the food matrix effect in the context of the Irish diet and the Food for Health program in Ireland. Population level studies showed a reduce risk of cardiometabolic diseases associated with dairy intake. Ishita Shah (on behalf of Gulustan Oztruk) presented a study on the presence of xanthine oxidase in milk processing streams. The discussion panellists offered different perspectives on why the food matrix matters and the difficulty of conveying information about food structure to consumers.

The work of students is always a highlight of the IMGC symposium. This year there were many poster presentations that initiate a rigorous discussion facilitated by the delights of food and wine during the social mixer on the first evening. The tradition of highlighting students and their research efforts also continued, with five abstracts selected for travel awards and oral presentations in the main program.

This year’s IMGC symposium was, once again, an invigorating and fascinating meeting.