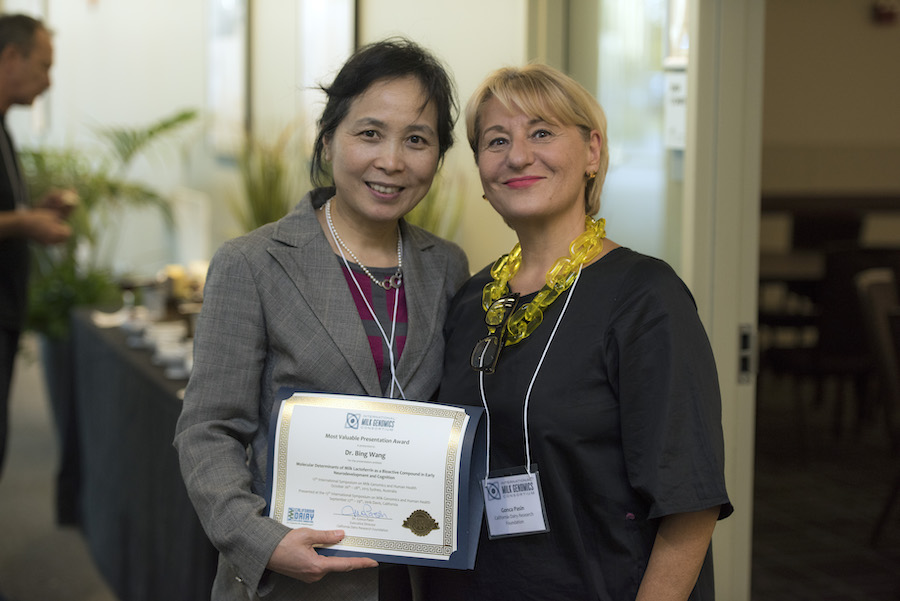 The International Milk Genomics Consortium (IMGC) held its 13th annual conference this past September 27–29, 2016, at the University of California, Davis. With a focus this year on moving “From Milk to Microbes,” the conference included 31 talks, 21 posters, a group dinner at Mulvaney’s B&L in Sacramento, and plenty of networking. Here are some of the top highlights from this year’s IMGC Symposium:

1) Kicking off the 13th year of the IMGC symposium, Butch Dias, chairman of the California Dairy Research Foundation, welcomed all attendees. Bruce German followed this welcome with a powerfully motivating view ahead to how milk research will soon leave many of today’s most devastating diseases in the past. Lactation and milk is a complex recipe that has been refined for millions of years, and still holds many secrets that will help protect and support infant development. Danielle Lemay presented on the IMGC’s newsletter, “SPLASH! milk science update.” (What’s that? Hint: you’re reading it right now!) SPLASH! contains more than 200 articles and attracts more than 80,000 readers to the IMGC website every year. Danielle also revealed milk science topics that will likely drive future research and discussion in the years to come.

2) Day one of the symposium focused largely on new insights into the relationship between milk and the gut microbiome in infants. The genus Bifidobacterium claimed center stage; David Mills discussed its unique relationship with milk, feeding on milk glycans and generating metabolites that dampen inflammation and strengthen gut barrier function in the infant. Steve Frese revealed the development of stable replacement microbial communities that can restore a normal microbiome in a clinical setting when given to compromised infants. Jennifer Smilowitz described a clinical trial in which infants were given supplements of a strain of Bifidobacterium and showed that the microbial supplement colonized the gut, was well-tolerated and did not result in any adverse events.

4) Bing Wang, winner of the Most Valuable Presentation award for her talk at 2015 symposium, presented an update on her examination of the influences of milk lactoferrin. In a randomized controlled trial, piglets fed milk supplemented with lactoferrin showed increased activation of genes associated with mental development, learning, and memory. Her ongoing research aims to determine the molecular mechanism that underlies these effects on neural development.

5) On day 2, the symposium shifted to discussion of complex carbohydrates in milk. Daniela Barile kicked off the day with a great keynote talk on the challenges—and incredible promise—of glycans in human and bovine milk, and how they can be extracted and purified in large quantities. Next, Bethany Henrick discussed human milk oligosaccharides (HMOs) and their bovine analogue, bovine milk oligosaccharides (BMOs), as a powerful new resource for immune modulation. In intestinal epithelial cells, both HMOs and BMOs can influence changes in protein expression and production of cytokines, which play a role in regulating immune response. As well, Michiko Shimoda presented on how HMOs encouraged development of dendritic cells, which play an important role in regulating the adaptive immune response.

6) Several members of the Barile Lab also shared the results of their work. Valerie Weinborn discussed producing HMO-mimicking molecular products using whey as a starting material, while Randall Robinson shared his success at using mass spectrometry to identify both oligosaccharides in milk and active peptides in different varieties of cheese. Joshua Cohen provided insight into his high-throughput method for isolating glycans and other bioactive molecules from whey.

7) Elisha Goonatileke presented on Gly-Q, an analytical platform developed for rapid, high-throughput analysis and quantification of carbohydrates. She examined both human and bovine milk using Gly-Q, and demonstrated that the rapidly obtained results did not lead to loss of resolution or sensitivity. This method will offer a new tool to both academia and industry researchers studying milk oligosaccharides.

8) Christine Leroux extracted and identified microRNA from mammary glands and from milk fat globules, and suggested that these two sources exhibited different miRNAs profiles. Richard Heinz used transgenic mice to demonstrate the important roles of milk miRNAs for milk production; mice that were nursed by mothers with constantly high expression of a particular miRNA in their mammary glands showed a dramatically reduced survival rate.

9) Although discussion was serious and focused during the day, researchers and scientists got to lighten up and relax with dinner, music, and even a bit of impromptu dancing at Mulvaney’s B&L in Sacramento. A live band provided some great tunes as attendees shook out some muscles after a long day of presentations.

10) The third day of the symposium featured new discussion of the proteins and glycoproteins of milk. Carlito Lebrilla gave the keynote talk, discussing new and advanced methods for extracting and profiling milk glycans. Bernd Stahl identified new proteins in the milk extracellular vesicles, while Kasper Hettinga presented on the use of Ultraviolet-C (UVC) light as a sterilization agent for raw milk. UVC light can kill bacteria through DNA damage without requiring the high heat of pasteurization, which can destroy beneficial proteins. Tom Baars and Betty van Esch presented research that showed a difference in the development of allergies between raw and processed milk in a mouse model.

Over the course of the entire symposium, considerable small group discussion continued to foster the air of collaboration and multi-disciplinary cooperation that has allowed research into milk genomics to be so diverse and successful. Many thanks to the IMGC sustaining members, sponsors, Laurie Jacobson and other staff who ensured that the events ran smoothly, and all of those who attended and contributed to another successful IMGC symposium.