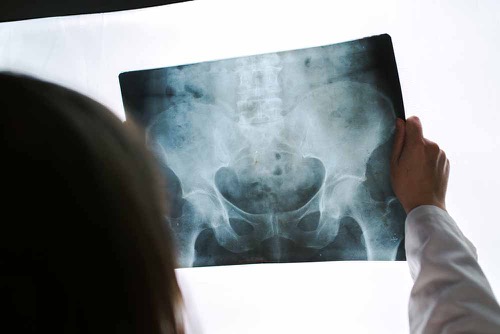 Bone density decreases with age, leading to an increased risk of hip fractures. Milk is considered helpful for maintaining bone health due to its high calcium, protein, and its fortification with vitamin D, and the 2015 Dietary Guidelines for Americans recommends that adults consume two to three cups of milk or equivalent dairy foods per day to protect aging bones [1].

“Previous studies of milk and hip fracture have not shown a clear benefit from milk, yet U.S. guidelines continue to recommend milk consumption for older adults,” says Professor Diane Feskanich of Brigham and Women’s Hospital and Harvard Medical School. “More recently, a study done in Sweden found an increased risk of hip fracture with higher milk intake in women but not in men, which I found surprising,” she says.

The Swedish study examined two large cohorts and found that women had a significant 9% greater risk of hip fracture for every glass of milk consumed per day, whereas no association was observed for men [5].

“This prompted us to do a similar analysis in our male and female cohorts,” says Feskanich. “There are differences in dairy consumption and hip fracture rates between Sweden and the U.S. and we did not want to assume that the Swedish findings would apply universally,” she says.

In a new longitudinal study, Feskanich and her colleagues found that among a large cohort of U.S. men aged 50 or older and women past menopause, higher milk and dairy intake were associated with a reduced risk of hip fracture [9].

The new study examined the association between the long-term consumption of milk and other dairy foods and the risk of hip fracture in two large U.S. cohorts, the Nurses’ Health Study (NHS) of women and the Health Professionals Follow-up Study (HPFS) of men. In these two cohorts, 80,600 postmenopausal women and 43,306 men over 50 years of age were followed for up to 32 years.

Feskanich and her colleagues previously reported no significant associations between milk consumption and hip fractures in the NHS and HPFS cohorts [6-8]. However, their new study had increased statistical power with additional years of follow-up and hip fracture cases compared with the previous studies, and also expanded the analysis to account for a variety of factors including sex, age, and other dietary intakes.

The study yielded some unexpected results. “Two things were surprising,” says Feskanich. “One was that the benefit of milk did not seem to be due to the calcium, vitamin D or protein content of the milk, i.e., when we added total calcium, vitamin D and protein intakes to our statistical models, we still found a lower risk of hip fracture with higher milk intake,” she says. “ Future research would be useful which can examine what it is in milk that may lower fracture risk,” says Feskanich.

“The other surprising thing we found was that the benefit from milk was mostly found in men and women with higher body mass index,” says Feskanich. “This was an ad-hoc analysis and needs to be examined and confirmed by others,” she says.

The study concludes that higher long-term milk consumption in older U.S. adults is associated with a lower risk of hip fracture, and this finding was not explained by the calcium, vitamin D, or protein content of milk. “I don’t think that a dietary recommendation can be made based solely on our research, but it does suggest that older adults may safely choose to include milk as part of their plan for bone health,” says Feskanich.

Further studies of milk consumption and hip fracture may also benefit from looking at a variety of populations.  “Dietary recommendations may not be one-size-fits-all, and future research needs to target specific populations,” says Feskanich.