Harnessing Cheese Microbes to Reduce an Allergy-like Reaction to Cheese 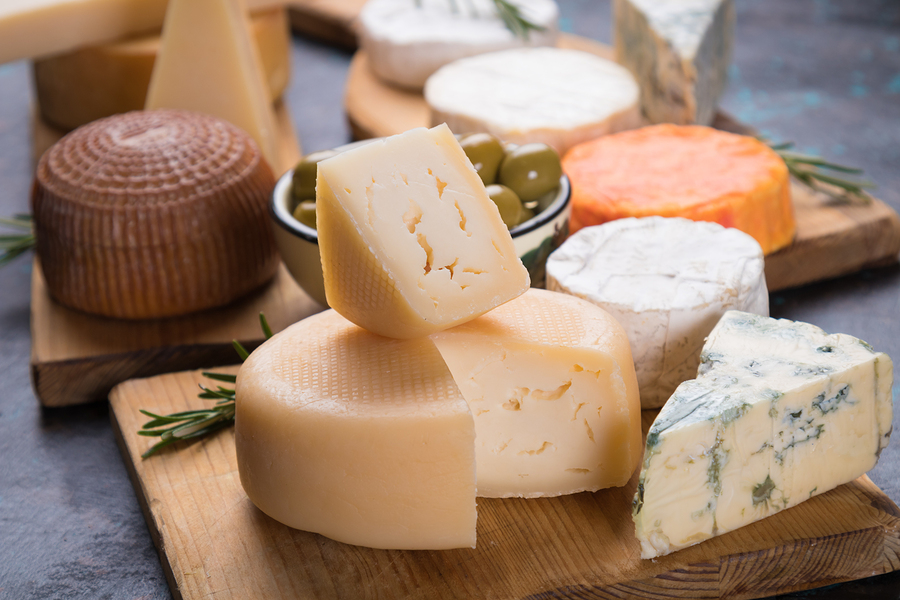 Cheese has been a part of human diet for thousands of years. Its production relies on the complex interplay between many different microbes, which contribute to the flavor, texture, and aroma of cheese during the ripening process.

This is particularly true of long-ripened cheeses, which can spend months on the shelf being acted upon by bacteria and fungi. “In long-ripened cheeses, you produce your cheese wheels and store them in your ripening cellar for the desired amount of time, and then you have the formation of a biofilm on the cheese rind, which is very important for the aroma and flavor production,” says Dr. Stephan Schmitz-Esser of Iowa State University.

However, long-ripened cheeses are also a common source of biogenic amines such as histamine (1-3). Histamine can influence the mammalian immune, cardiovascular and gastrointestinal systems, and can be produced by bacteria during food fermentation (1,4,5). “Histamine formation in fermented foods is a huge issue because there are these intolerances associated with histamine, because it’s such a potent chemical that can do so many things,” says Schmitz-Esser.

Eating high levels of histamine can lead to an allergy-like reaction known as histamine intoxication, resulting in asthma, rashes, swelling, hives and diarrhea (6,7). One way to prevent histamine intoxication is to reduce its formation or degrade it in foods, and researchers have been interested in finding bacteria that can break down histamine. “There’s a big interest in the potential to reduce histamine content in food,” says Schmitz-Esser.

In a new study, Schmitz-Esser and his colleagues analyzed the bacteria present in Vorarlberger Bergkäse (VB), a long-ripened artisanal hard cheese, and identified histamine-degrading bacteria as well as genes and pathways involved in histamine degradation (8). “Ultimately, we could utilize the bacteria to reduce histamine content during the ripening process so that producers would be able to produce cheeses that are ripened normally but with reduced histamine content,” says Schmitz-Esser. “The big breakthrough here is that we can now identify which genes specifically are responsible and whether these genes are present in other bacteria as well,” he says.

In previous work, Schmitz-Esser characterized the microbial community present on VB (9). During VB’s ripening time, which can last anywhere from 3 to 18 months, bacteria and fungi form a rind on the cheese. One of the major types of bacteria identified in these rinds is called Brevibacterium, and it is also used for ripening many other cheeses (10,11). Schmitz-Esser was able to isolate and sequence various Brevibacterium strains from this cheese.

In the new study, Schmitz-Esser characterized the abundance of Brevibacterium on VB cheese rinds, and analyzed the contribution of these bacteria to the cheese ripening process. He found that Brevibacterium were abundant on VB rinds throughout the 160-day ripening period. The study also found that important cheese-ripening enzymes were conserved among cheese-associated Brevibacterium. “There seem to be a couple of really conserved elements and others that are less conserved,” says Schmitz-Esser.

The fact that this histamine degradation pathway is present in certain Brevibacterium strains suggests that these strains could be used to create foods with reduced histamine. “Brevibacterium are very common cheese rind organisms, so we know they are abundant and would be very well suited to be used during cheese ripening,” says Schmitz-Esser. “Ultimately, we could imagine using these specific strains for ripening to produce texture, flavor, and aroma, but at the same time they would also reduce the histamine content in the cheeses,” he says. “That might be useful for the producers to sell cheeses that are histamine-reduced and target people that may be avoiding cheese or other fermented foods because of their histamine intolerance,” says Schmitz-Esser.

One of the Brevibacterium strains that Schmitz-Esser analyzed also included a small circular piece of DNA, known as a plasmid, which he suggests might contain genes that help the bacteria adapt to life on cheese rinds. “The potentially interesting aspect of that for the future is that if you have plasmids, this is one of the prerequisites to develop tools to potentially genetically modify those strains,” says Schmitz-Esser. “This may be relevant in the future from a biotechnological perspective,” he says.

Schmitz-Esser is continuing to analyze the genes and pathways he discovered and their role in histamine degradation. “One thing that we are interested in is trying to find more bacteria from different types of cheeses that have these capabilities and to analyze their genomes to see whether we find the same set of genes,” he says.

The overarching goal is to analyze these pathways in more detail to better understand the cheese ripening process and the role of cheese-ripening microbes. “There’s definitely a need to understand these systems better,” says Schmitz-Esser. “For many bacteria and fungi on the cheese rinds, we don’t know very much about how specifically they contribute to cheese ripening,” he says. “We know they are there and they may be abundant, which implies they may be important, but there’s still a lot left to learn,” says Schmitz-Esser.

Understanding these microbes and their role could have important economic and food safety implications. “If we understand these systems better, such as which microbes are there and how they contribute to different parts of cheese ripening, we might be able to potentially reduce ripening times or maybe identify protective cultures that could suppress foodborne pathogens or things like that,” says Schmitz-Esser. “These are the kinds of directions we want to go in the future.”