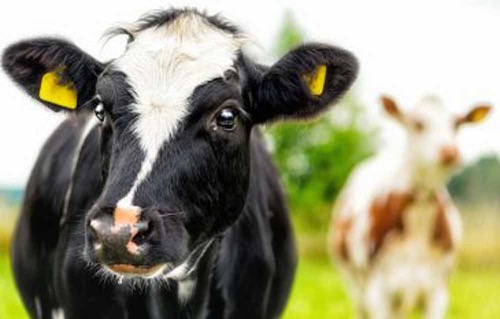 Serotonin is best known to us as a brain factor that affects mood, with high levels associated with euphoria. However, it has much wider effects in the body, influencing gut motility, blood vessels, and osteoporosis. To scientists, this points to an interaction with calcium, and as we all know, calcium is an important component of milk and dairy products. So does serotonin influence milk calcium, and could the mood of cows affect milk production? Recent research by scientists in Wisconsin suggests that serotonin has an effect on regulating calcium in the important transition period from late pregnancy through lactation [1].

Calcium demand is at a peak during pregnancy and lactation. Maintaining a steady balance of calcium intake through the diet, and having the necessary biological mechanisms in place to control and regulate the way in which it is utilized, are essential. However, sometimes the demand outstrips the supply, and the hormones that regulate calcium can’t keep up. This can happen in many species but is a special challenge in dairy cows that produce relatively large offspring, and large volumes of milk. When cows are noticeably affected, it is referred to as milk fever. Estimates of the prevalence of milk fever in the USA are between 5–10%, and maybe greater than 20% if based on low concentrations of calcium in the blood of animals [2], so it is a condition that animal scientists have been studying for some time.

Calcium is found in high concentrations in milk and is actually an essential component of its micro-architecture. In addition, calcium is known to contribute to good health and is particularly well known for its role in promoting strong teeth and bones. But calcium is also critical for many other normal functions in the body. For example, it is found inside cells where it binds to proteins and is essential to the internal machinery of the cell. It is also found in the fluid that bathes the cells and keeps them healthy and functional. For some roles, it even has specialized micro-compartments so it can be available for rapid mobilization as required. A good example is how it is involved in allowing muscles to do work. Muscles are made from many muscle cells, or fibers, that are able to work together in an orderly manner to cause muscles to contract. They achieve this by sliding thousands of filaments made up of two long protein chains and found in every muscle cell, over one another. The sliding filaments are actually a very large number of overlapping, grab-pull and release events that happen so quickly they result in a smooth contraction of the muscle. The key initiator of the contraction is calcium. Calcium unlocks a site on the proteins, allowing one to grab the other and complete one cycle of the sliding motion. So every time a muscle does any work, holding a posture, or walking, or even moving a finger, or turning an eye, calcium is involved.

What happens when there is not enough calcium to supply all of these events? One of the first signs is a collapse due to the inability of the muscles to function. This is what happens to some dairy cows in the period following calving when she has been challenged to provide lots of calcium to the developing calf during pregnancy, and then has the additional challenge of providing calcium for producing milk. The condition is treated by giving an injection of calcium, but the farmer needs to first find the cow and quickly respond, and can be a risk to the animal. So researchers have been investigating ways in which this condition can be best managed and prevented from happening.

Calcium is regulated by hormones, and particularly the hormone produced by a tiny gland found in the neck of the animal, the parathyroid gland. The gland produces parathyroid hormone (PTH) that controls the way in which calcium is absorbed, distributed and recycled in the body. The scientists who study hormones have been working on the issue of milk fever for some time, and the recent research by Weaver et al. [1] found an association between calcium levels and serotonin.

Serotonin is best known as a brain factor that is associated with mood and targeted in the treatment of depression. However, serotonin is also released in other parts of the body and has been found to influence a molecule that is similar to PTH, known as PTH-related protein (PTHrP). This control system influences calcium regulation at the level of the mammary gland and is important for calcium control during lactation [3–5]. However, most of these studies have previously been done in laboratory mice or rats, and there has been very little attention paid to the system in dairy cows. Weaver and colleagues set out to address this issue in two breeds of dairy cows, Holstein and Jersey [1]. Their approach was to directly infuse the cows with serotonin for a short period during late pregnancy.

What happened? The scientists monitored calcium levels in milk and in the blood of the cows and also measured hormone levels. They found that the levels of calcium were altered by the treatment with some differences between Holstein and Jersey cows. The pattern was generally a reduction in calcium levels in the blood in the period of infusion or immediately after the infusion, which was proposed as the stimulant for mammary gland PTHrP release and better regulation of calcium during the onset of lactation. The differences noted between Jersey and Holstein cows may be a focus for continued study. The data suggests that serotonin could be used to prevent milk fever, either by treating animals or looking for natural variants with higher serotonin levels. Whether the cows have naturally elevated levels of serotonin, or are treated with a synthetic form, the future application of this research should be conducive to happier cows and happier farmers.