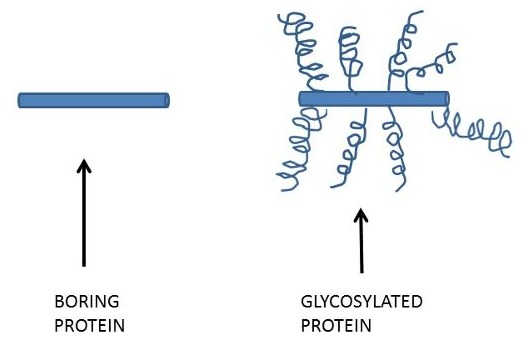 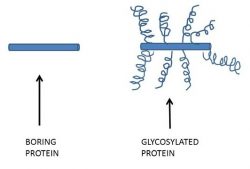 Some of us tend to ignore this fact because glycosylated proteins are more difficult to study than the same protein without carbohydrates.

Why do carbohydrates and proteins ever link together? Protein and carbohydrate molecules each have many possible biological functions; together, the number of things they can do multiplies.

One of the major functions of glycosylations on proteins is to facilitate communication. Think of a glycosylated protein (or “glycoprotein”) as a person holding a bunch of different signs. The person is acting as the protein backbone and each sign as a set of sugar molecules. Cells, like people, need to communicate with each other, and these sugar molecules are the language of communication.

If the strings of sugar molecules were actually signs, imagine what they would say. “WILL WORK FOR GLUCOSE.” Seriously, though, some might say, “I’m old, time to retire” or “I’m on your team.” You can imagine that “I kill old cells” would be searching for “I’m old” and that “I kill foreigner invaders” would be highly stimulated by “I’m a foreign invader.”

Another example of a function of glycosylations can be illustrated by mucins. Mucins, some of which are secreted into milk, are heavily glycosylated proteins. When mucins are secreted by the digestive tract, they form a gel-like layer to protect the intestine cells from the stuff being digested and the chemical soup that’s doing the digesting. Basically, mucins keep our guts from digesting themselves! The plethora of glycosylations on a mucin’s protein backbone is nature’s way of saying Keep Out.

In addition to enabling communication, sugar molecules on a protein can also assist with cell-cell adhesion. When “I am an immune cell” is swimming through the blood stream, cells near a site of inflammation will do more than just display the glycoprotein sign, “Help! Our neighbor is infected!” They also display sticky glycoprotein “adhesion molecules” to slow down the infected cell killer and direct it to the cell that needs to be killed. Like hailing a cab for a friend, the neighboring cells stick out their carbohydrate side chains to hail the passing immune cells.

So what are glycoproteins doing in milk? Some proteins in milk are probably glycosylated for the same reason that many extracellular proteins are glycosylated: the sugar molecules help the protein keep a certain shape necessary for its function or to keep the protein from dropping like a rock out of the solution. It’s difficult to move or digest “rocks.”

Glycosylations on the really cool glycoproteins do a lot more. In “The many faces of lactoferrin,” Ross Tellam eloquently described the latest research on the glycosylations of lactoferrin. If there was a gang of cool glycoproteins, lactoferrin would be leader of the gang. It is heavily glycosylated with many different sugar complexes, each of which target specific pathogens for binding and neutralization. If lactoferrin binds the pathogen, it can’t then invade and infect gut cells. Instead of having a key to binding one or two pathogens, lactoferrin is like a locksmith; it has keys to bind an enormous variety of pathogens. Lactoferrin is the Swiss Army knife of locksmiths. The lactoferrin content of bovine milk alone should be worth more than the price of fluid milk today.

After the analytical chemists painstakingly dissect the structures of glycoproteins in milk, biologists still need to figure out what they do. It’s time to decipher the writing on the signs.