Getting the Balance Right 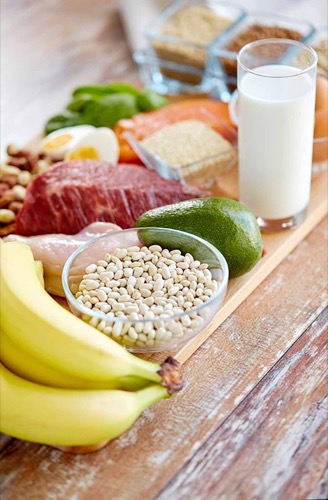 Once described as an epidemic, obesity has now reached pandemic status with an estimated 600 million obese adults worldwide, and an additional 1.4 billion that are overweight (1). The cause of the pandemic is known—people consuming more energy (calories) than they expend—so it would seem that the solution would be to simply eat less. But a team of nutritional ecologists believes that cutting calories will not solve anything, because it ignores some basic tenets of human (and animal) biology. Using data from fruit flies, mice, birds, fish, monkeys, and humans, Raubenheimer, Simpson and their colleagues demonstrate a seemingly universal law of animal nutrition: a predominant appetite for protein (2-5). They propose that the human need to meet a fixed daily protein target leads to weight gain through the overconsumption of low protein foods that have come to dominate the Western diet. Rather than advocating for a high protein diet that eschews carbohydrates, they emphasize a balance of macronutrients for optimal health. Can dairy help strike this balance? Whole-food sources of protein that are easy to access, like dairy, can help balance out those beloved low-protein, high-carbohydrate processed foods and keep energy consumption in check.

There are currently more people in the world that are overweight than underweight, and the gap between the two continues to widen (1). What is it that so many populations are doing wrong when it comes to nutritional decisions? The strong connection between Western diets and obesity points the finger of blame at carbohydrates and saturated fats. Indeed, the basic premise of the trendy Paleolithic diet is that modern human metabolism is not adapted to the high carbohydrate and fat intake of the Western diet, and thus, we suffer poor health outcomes such as obesity and type 2 diabetes. Proponents of this viewpoint, most notably Colorado State University physiologist Loren Cordain, argue that because Homo sapiens made their living as hunter-gatherers for the majority of their existence (ca. 200,000 to 10,000 years ago), the optimal human diet recreates the menu of the Paleolithic (6).

As indicated by the popularity of the Paleolithic diet, this evolutionary perspective on human nutrition has been well received by the public as a satisfactory explanation for our growing waistlines. But many anthropologists and nutritionists are not as enthusiastic. Genetic data strongly support the position that humans have adapted to many nutritional changes that accompanied the transition to agriculture (7). The strongest example of this is the evolution of lactose tolerance in populations that adopted dairy culture, including European dairy farmers and East African pastoralists. Additionally, there is the false belief that our hunter-gatherer ancestors subsisted solely on protein. Archaeological and fossil data indicate that our ancestors ate a much more varied diet, including carbohydrates provided by grains, than is portrayed by the Paleolithic diet (8). Indeed, these diets approach the upper limit of human protein intake. High protein diets (>35% of energy from protein) are considered toxic and are associated with numerous poor health outcomes (2).

David Raubenheimer, Steven Simpson, and their colleagues take a different evolutionary approach to human nutrition. They acknowledge that modern humans are not biologically identical to our hunter-gatherer ancestors, but argue that they are still animals that have specific macronutrient and micronutrient requirements (4). You can take the Homo sapiens out of the Stone Age, but you can’t take away their need for the proper proportions of nutrients to facilitate growth, immune function, and reproduction. They argue that because of the critical role protein plays in important physiological and biological functions, animals, including humans, prioritize consumption of protein energy over non-protein energy (NPE) (that is, fat and carbohydrates) (2-4). In their model, carbohydrates and fats are not necessarily evil villains, but simply macronutrients that are over-consumed in efforts to meet the optimal protein target.

Animals, including humans, have separate appetite systems for protein, fat, and carbohydrates. The protein leverage hypothesis (PLH) argues that there is a predominant appetite for protein, and it plays a key role in explaining the rise in overweight (BMI > 25) and obesity (BMI > 30). It predicts that, as the proportion of energy from protein decreases in available foods, animals will increase their consumption of low protein foods in order to meet their protein target. In doing so, they increase their energy intake leading to weight gain and eventually obesity (2-4).

Imagine an animal that requires 50 grams (g) of protein a day for optimal functioning. In an environment with ample protein, it may be able to access this protein target through the consumption of 1500 kilocalories (kcal) of energy. However, if the amount of protein available in the environment decreases, that animal will now have to consume more low-protein foods in order to meet the 50 g requirement. The intake of fat and carbohydrates will necessarily increase, as will the total daily caloric intake. Humans, they argue, are simply animals living in a low protein environment.

Of mice and men

If you want to understand human’s prioritization for protein, you’ll need to go back a lot further in time than the beginning of the Paleolithic. Animals with whom humans share extremely distant relatives—including insects, birds, fish, and other mammals—have demonstrated nutrient-specific appetite systems that prioritize protein (2). That it has also been seen in slime molds (2, 4) (not animals, but part of Kingdom Protista) suggests a very ancient evolutionary adaptation indeed!

One strong comparative example comes from experiments with mice. When researchers manipulated the macronutrient content of mice food pellets, the mice responded as predicted by the PLH; they prioritized their protein appetite and increased total food intake as the percent protein of the pellets decreased. Consequently, mice on lower protein diets had increased fat gain as a result of increased energy intake (reviewed in 4).

Although human diets are more difficult to manipulate than those of captive mice, it is still possible to test for the PLH in human subjects. In fact, experimental findings on humans suggest an even stronger prioritization of protein than that found in mice (2). Gosby et al. (3) reviewed 38 experimental trials that manipulated human macronutrient intake (either via a fixed macronutrient composition or increasing the consumption of one or more macronutrients) over 2 or more days while permitting ad libitum (“as much as you please”) intake of energy. Taken together, results support the prediction of the PLH: as percent protein in the diet decreased, energy intake increased.

It is important to point out that this relationship between percent protein and energy consumption is not identical across the range of protein energy intakes, but instead depends on the target protein intake (for humans, somewhere between 15–20% of total energy – but see discussion below). For example, Gosby et al. found a marked increase in energy intake when protein energy was reduced from 20% to 10%. Above the target, energy intake is predicted to decrease. But across the experiments, increasing protein energy above 20% only a small effect was noted (3). Similar results of “asymmetry in protein leverage” were found in non-human animals, which suggest that the costs of not meeting the protein target (such as poor growth, immune function, and reproduction) must be greater than the costs of excess protein intake (3).

Food, food everywhere, but not enough protein to eat

It is difficult to think of humans, many of who regularly have access to any food imaginable, as living in a low-protein environment. Unlike mice and slime molds, we have the benefit of nutritional labels that tell us the precise protein content of virtually every food we would want to consume. Why don’t we simply fill our pantries and refrigerators with more protein sources?

As Raubenheimer et al. (4) describe it, the amount of protein in our environment has been “diluted,” a pattern that began with the adoption of agriculture thousands of years ago, but that has continued even over the last 40 years. Between 1971-1975, the average proportion of protein energy in the diet was 15.9%, but decreased to 15.4% in 2005 (3). Because protein targets are assumed to be identical between the two time periods, this seemingly small drop in protein energy is associated with a 247 kcal per day increase in energy (3).

One major reason for this drop is the increased availability of ultra-processed foods (4). These products contain little or no whole food sources and are instead made from sugars, starches, hydrogenated oils and fats, and parts of animal foods. They are also high in calories. Raubenheimer et al. point out that these foods are also quite tricky because they take advantage of the neural circuitry behind the protein appetite through the addition of savory flavors that are usually associated with protein-rich foods (4). When you eat these foods, you activate the reward system that has evolved to promote consumption of essential amino acids and whole protein (discussed in 9), which in turn detracts from counterbalancing the diet with additional protein.

In addition to filling us up and making us think we are eating more protein than we are, these foods are also, in general, more affordable than whole food sources of protein such as meat, fish, nuts, or dairy. Reviewing a study on macronutrient composition of food and price, Raubenheimer et al. (4) report that although energy density and price were not associated, there was a strong positive association between the protein density of a food and its price. Finally, these foods are “fast,” in terms of quickness of preparation and accessibility. Convenience could be equally as important as price in making food decisions.

Economic and cultural factors linked to low-protein consumption suggest that simply avoiding low-protein foods is an untenable solution. Major nutritional overhauls of our environment are difficult, so solutions that work within the framework we have are likely to be more successful, albeit perhaps on a slower time scale. But if the PLH is correct in its predictions about the cause of obesity, reducing intake of low-protein foods, and adding in whole food sources of protein may limit weight gain and perhaps even promote weight loss.

Here’s where dairy could play an important role. A glass of milk is “fast” as well, but unlike a bag of cookies comes with around 8 g of protein. Consuming a glass of milk alongside your packaged cookies may limit intake of cookies, which can lower your daily energy intake. It is not about giving up particular foods or nutrients entirely, rather finding balance to reach the optimal macronutrient ratios.

The optimal protein intake actually varies across humans, so it is not possible to say what the ideal human macronutrient profile would look like. It is clear the protein intakes that approach 30% of energy could have poor outcomes, as too much protein intake can be toxic. The compensatory mechanisms that exist to avoid protein deficits suggest a diet near the protein target may provide the most health benefits. But research shows that just what that target may be for optimal health differs across the human life course. For example, in growing children and adolescents, diets with higher protein content have positive fitness outcomes (less growth impairment, better tissue repair, and body maintenance). Fertility is also impaired on low protein diets, suggesting that reproductive-aged adults would also benefit from a higher protein intake.

But remember the fat mice on the low protein diet from the study discussed above? They may have gained weight from their low protein, higher carbohydrate diet; however, they lived the longest of any of the mice fed the other experimental diets. Similar dietary manipulations in fruit flies revealed the same pattern—diets with a low protein to carbohydrate ratio appear to prolong the lifespan.

That there are benefits and costs to diets that have both high and low protein to carbohydrate ratios suggests that there is not one optimal diet. Age is just one known factor that interacts with diet to influence fitness outcomes. Sex, genetic makeup, and activity level are likely other important factors to consider (2). But with the staggering number of obese individuals in Western, as well as, developing countries, there is urgency in understanding how our prioritization of protein may be driving us to consume far more fat and carbohydrates than are needed.