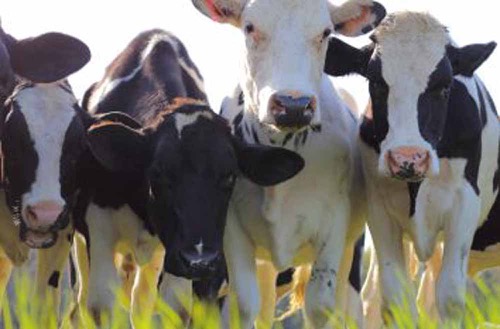 The introduction of genomic selection into dairy cattle selective breeding programs has been greatly anticipated and is a remarkable example of the benefits of genomic technology [1,2]. Made possible because the systems for selective breeding were already well developed in dairy, and the widespread use of artificial insemination meant that new developments could be delivered quickly. First introduced in the USA in 2008, there has now been sufficient time to generate enough data to assess its impact.

Genomic selection is based on the identification of breeding animals from the composition of their genome [3]. Each individual, aside from identical twins, has a unique genome. Although the number of regions shared among individuals within a cattle breed is much greater than that in a diverse population like humans, it is these differences that make a highly productive dairy cow, or one that is not so great.

Until recently, the selection of breeding animals was based on a process of testing bulls by observing the performance of their daughters. Commonly, this involved thousands of cows and took many years to complete. The potential major advantage of genomic selection is to dramatically reduce the time for the selection process. This is possible because the genetic composition of the bulls and cows can be completed at an early age, rather than waiting for the lengthy process required to infer the genetic value of the animals. Effectively, this means that the age of the parents of offspring is younger. The potential gain from this effect was predicted from theoretical modeling [3-5] and has now had sufficient time in practice to reveal the true impact.

A recent paper published by Dr. Adriana Garcia-Ruiz et al. [6] analyzed the data from the US National Dairy Database to compare the effect of selective breeding programs before genomic selection was introduced and after its implementation. To do this, the researchers focused on genetic trends, that is, the rate at which the improvement in traits was changing. This is possible due to frequent measurements of dairy production traits through herd recording programs, which is an integral part of the industry. They followed an established procedure for analysis, which took into account the four possible routes of genetic change between parents and offspring. The results of the study overwhelmingly endorsed the predictions and clearly demonstrated that the rate of gain in significant traits has accelerated.

As predicted, there was a marked reduction in generation interval. This reflects the improvements in the accuracy of the process and the use of younger breeding pairs, particularly younger bulls. The introduction of genomic selection in 2008 produced a 37% reduction in generation interval in six years. This change underpinned a major contribution to all other changes in rates of gain. The analysis revealed that there was about a 50% increase in the rate at which genetic improvements were contributing to improvements in milk, fat and protein yield following the introduction of genomic selection. When the figures were compared directly between 2008 and 2014, the comparable improvement was 71%, 111%, and 81%, for milk, fat, and protein, respectively, for the three production values.

Apart from the milk production traits, other factors that affect the health of cows and the many factors that influence the productive life of a cow have been difficult to change through selective breeding. The reasons for this are complicated, but mostly it is because the traits have very low heritability. Theoretical predictions have predicted that these low heritable traits will benefit from genomic selection. This was borne out by the study [2]. The researchers analyzed data for fertility, mastitis, and longevity. Fertility in dairy cattle is crucial to farmers as they manage cows through timed calving and periods of lactation. Over many years, as cows have been selected to produce more milk, there has been a steady decline in fertility. The factors contributing to this decline have been difficult to pinpoint, but it has become an issue in herd management. The low heritability affects accuracy for measuring breeding values, and has made it difficult to influence with genetic selection. Genomic selection has the advantage of improving the accuracy of genetic measurement, and simultaneously incorporating multiple selection traits. This was reflected in the analysis of fertility since the introduction of genomic selection, which showed marked improvements in fertility gains.

One of the most significant health issues in dairy cows is mastitis—another trait with low heritability. Not only does it affect the wellbeing of individual cows, collectively it has a very large economic impact on the dairy industry. The number of cells in milk is used as an indicator of when mastitis may be present or developing. When analyzed, this trait was found to be improved by genomic selection by an astounding change of over 300%.

Finally, the longevity or productive lifespan of cows was analyzed. The capacity of a dairy cow to remain healthy and productive is highly valued by farmers. There is a great deal of investment and management time in raising a cow through to her first lactation, and consequently, the productive lifespan of the cows in a herd has a major impact on the economic output of the farm. Previously, there was no trend for improvement in the productive lifespan of cows. However, since the introduction of genomic selection methods, the annual improvements have been between 5- and 16-fold. Once again, these results show the greatest benefits for those traits that are difficult to measure and with low heritability.

Clearly, the introduction of genomic selection is having an overall impact on the efficiency of production by the dairy industry, even though it is still in its infancy. Farmers now have the best available genetic tools to implement the genetic improvements more rapidly. The greatest advantage is being seen in traits that have been difficult to measure or influence, which means that new generations of dairy cows will have longer and healthier productive lives.