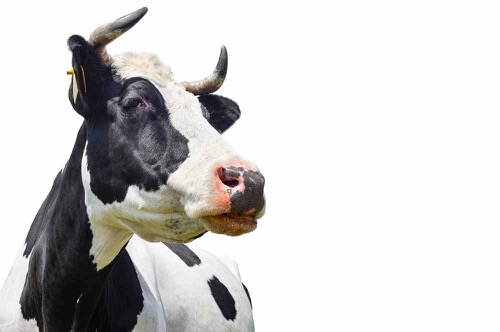 Next time you are running with the bulls in Pamplona you may have a moment of vivid, but very brief, clarity and think “If only the bulls were Polled.” In a significant breakthrough, scientists used genetic editing technology to produce hornless dairy cattle (Polled cattle) thereby potentially eliminating a controversial animal welfare issue, the physical dehorning of dairy cattle, while likely retaining their elite dairy production genetics [1-3].

Cattle have horns for good reasons. In the past, they came in very handy for defense against predators and, at the end of the day, predators were often left hurt, hungry, and humiliated. Horns on males also made a big statement in the social group of the herd. They signified health and vitality to females, and a threat to their competitive peers also striving to find females for mating. But times change.

Over the last 10,000 years, humans selectively bred cattle to produce more meat or milk. The raw ingredient of this process is genetic (DNA) variation in the cattle population, i.e., the genetic differences that make individuals different from each other. Consequently, today’s cattle are unlike their undomesticated ancestors, both in form and function as the former were bred to be highly specialized for the dairy or beef industries. Even over the last 60 years, scientists calculated that global livestock productivity has remarkably increased by 20–30% largely due to selective breeding [4]. In the dairy industry, this means more milk from each cow. But horns are still present in many cattle breeds, particularly dairy breeds, because in the past they were a low priority in most breeding programs [1]. However, in the modern dairy production system, horns threaten injuries to handlers and other cattle; the everyday competition between cattle for feed, water, and shade is intense. Horns are clearly an animal welfare issue in this production system. Consequently, about 80–90% of dairy cows have their horns or horn buds removed each year in the U.S.A, usually when the animals are very young [1, 5, 6]. Similar rates also occur in many other countries.

Veterinarians and livestock producers report that physical dehorning of cattle is painful (although analgesics are now widely used), expensive, associated with the ever-present risk of infection, and typically dehorning causes a small production set back [7, 8]. There is public disquiet about the dehorning procedure, and it has raised the ire of animal rights activists. Consequently, physical dehorning is an animal welfare issue even though the primary purpose of dehorning is to improve animal (and human) welfare. It’s a Catch-22. Dairy producers and animal rights activists agree that there is an urgent need for an alternative solution to this tricky animal welfare issue. Now there is one—genetically edited dairy cattle that have no horns! It’s an amazing tale that reveals how innovative science can solve a fundamental practical problem in the livestock industry and also challenge government regulatory authorities.

Alison Van Eenennaam is part of the vanguard of scientists using gene editing technology in livestock, and she is an advocate for government regulatory acceptance of the use of the technology in livestock animals. She argues that the FDA should regulate animal products made by the technology rather than the technology itself [2]. Van Eenennaam is based at the University of California at Davis where she is a Cooperative Extension biotechnology specialist. She is hard to track down. Her broad vision of translating scientific advances into practical solutions for use in agriculture is in big demand. I fleetingly caught up with Van Eenennaam by email and phone as she rapidly transited airports on different continents and eventually arrived back at UC Davis.

Van Eenennaam has published extensively in scientific journals, including several timely discussion articles describing the potential of gene editing technology and its challenges for regulatory approval for use in livestock. She specializes in crossing the boundaries between academia, applied livestock production systems, the biotechnology industry, and government regulation. That’s an impressive skill. Nowhere are all of these issues better illustrated than in the production of hornless dairy cattle [1, 2]. In this research project, Van Eenennaam worked closely with scientists from Recombinetics, an innovative biotechnology company based in Minnesota that specializes in gene editing technology applications in agriculturally important animals.

Van Eenennaam explains that some cattle breeds, like the Angus beef breed, are hornless due to a natural genetic variation or allele that arose in the distant past [1]. Many scientists have shown that this allele, called Polled, prevents horn growth when an individual inherits one or two copies of the Polled allele from its parents, i.e., the Polled allele is dominant to the usual Horn allele, at one precise region in the cow genome [2]. The genome is the complete DNA sequence of an individual and it includes all genes. Unfortunately, dairy cattle generally do not carry the Polled allele and hence these animals have horns [1, 2].

For some beef breeds, there has been a history of selective breeding for the absence of horns that has resulted in an increased prevalence of Polled cattle in these populations. This is the tried and tested method used to enrich for a desirable trait in a cattle population. However, Van Eenennaam and colleagues point out that selective breeding is a slow process, usually taking many generations before the trait is at high frequency in the population [1, 3]. They also noted that “conventional breeding methods to decrease the incidence of the Horned allele (i.e., increase the incidence of the Polled allele in the dairy cattle population) will increase inbreeding and slow genetic improvement” for important dairy production traits [3]. Van Eenennaam and colleagues emphasized that dairy producers historically selected animals “with the highest genetic potential for milk production, health, structural soundness, and fertility.” This hard-won genetic merit is like gold in the bank. Thus, Van Eenennaam and colleagues argue that there is a risk that conventional selective breeding for the absence of horns in dairy cattle could now compromise this important genetic heritage.

If only there was a simple and efficient way to directly transfer the small and natural Polled allele from beef cattle to dairy cattle. This process could quickly produce dairy cattle without horns and importantly without the loss of their elite dairy genetics. Van Eenennaam’s scientific team working with scientists from Recombinetics have done just that [1].

Van Eenennaam and her group are pioneers in the application of a new genetic editing technology in livestock, which potentially has many broad applications in agriculture [9]. For the hornless trait in cattle, Van Eenennaam explained that the genome editing technology is a safe and relatively fast way of transferring a small and naturally occurring genetic variant from one breed of cattle into another breed [1, 2]. It’s like using scissors to cut out a single letter or a word from a very large book and then inserting, at the same place, a different letter or word, copied from another edition of the same book. Apart from the intended word or letter change, the book is left as if new. The story is the same except for one small change. Van Eenennaam suggests that gene editing technology can be used to simply speed up what humans have been doing for thousands of years using the very slow process of selective breeding for desirable traits.

There are two versions of the gene editing technology. TALEN is the older version, and CRISPA is the sleek new version. They are a little like smartphones; the old one works, but the new one has many additional desirable features. Van Eenennaam’s commercial colleagues used the TALEN technology to produce hornless cattle. Importantly, the new CRISPA technology leaves no DNA “footprint” of the technology in the genome; the only change is at the intended targeted region. In contrast, some forms of the TALEN technology leave behind a tiny DNA “footprint” adjacent to the targeted change in the DNA. This technological difference could be important from a strict regulatory perspective, but currently, the broad brush of regulation treats both identically.

The Van Eenennaam team’s spectacular success using the TALEN technology was demonstrated by the birth of two hornless male cattle in 2015, in reproductive crosses where the offspring normally should be horned. These bulls then sired six hornless calves born in 2017 [1]. Van Eenennaam says that these animals look like normal healthy calves [4]. She reluctantly concedes, however, that the FDA requires highly detailed assessments of the health and safety of these animals and multiple generations of their offspring as a food source for humans [2, 4]. This could take quite a while.

The greatest challenge to using genetically edited hornless cattle in the dairy industry is FDA approval, which oddly classifies these cattle in the same category as a new animal “drug” [4]. Van Eenennaam encapsulates this issue in a discussion paper entitled “Regulate genome-edited products, not the genome editing itself” [2]. The title is particularly relevant for the hornless dairy cattle, as the source of the Polled allele was a beef breed of cattle consumed by humans for a thousand years and the Polled genetic variation was transferred into a breed of dairy cattle whose milk was consumed by humans for hundreds of years. What is perhaps missed in the regulatory maze is that history is an excellent judge of food safety. Van Eenennaam and colleagues may have recently ruffled a few regulatory feathers by presenting a well-reasoned case outlining why the relevant FDA regulation was “not fit for purpose” [4]. Sometimes the status quo needs a nudge.

Van Eenennaam emphasized that the gene editing technology introducing the Polled genetic variation into the genome of dairy cattle will improve animal welfare by eliminating the need for physical dehorning, and the technology used did not change the genome except at one small and precise target region where there was already a natural genetic variation in cattle populations. Although the regulatory status of these cattle is certainly vague, their future value in the dairy production system seems clear.

Scientists argue that there is potential for enormous advantages in livestock agriculture by using gene editing technology to produce “fitter, healthier, and more productive farm animals” [9]. It is still early days, but these animals may be needed to solve some of tomorrow’s major agricultural production challenges. Future editions of SPLASH! will highlight other examples of how gene editing could improve animal welfare while helping to feed the world.
Declaration: Dr Van Eenennaam works in conjunction with a private company, Recombinetics, and the author (RT) has no relevant commercial interests.