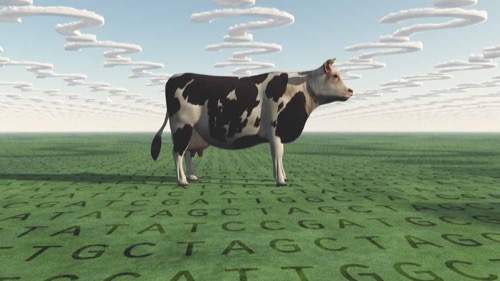 The world of cattle breeding is one of extremes. With the help of the international postal service, humans have skewed the genetics of the rich world’s cattle herds so much that even the most polygynous elephant seal couldn’t keep up. Just two bulls, ‘Pawnee Farm Arlinda Chief’ (Chief, born in 1962) and his son, ‘Walkway Chief Mark’ (Mark, born 1978), have no fewer than 60,000 daughters between them in Australia, plus countless others elsewhere. This is a blessing for detectives of milk genetics for it makes the task of correlating milk output with complex genomic features much cheaper than it would otherwise be.

Ben Hayes of the Department of Primary Industries in Bundoora, Australia, and his associates are among the top milk genetics detectives out there. Last year they published a paper1 in the journal PNAS describing the sequences of Chief’s and Mark’s genomes and identifying a series of genes that have been under strong (artificial) selection pressure. These genes are therefore likely to have a hand in important traits for breeding a profitable herd, such as high milk-production (in females only, obviously), high fertility, and resistance to various diseases.

In a more recent paper2, Hayes and his colleagues home in on a series of genes that directly alter milk composition in cows. They focus on one gene in particular, called RNASE5, and on almost a dozen other genes that influence how RNASE5 is regulated.

Surprisingly little is known about the biochemical processes that determine why the proportions of various fats and proteins in cows differ in their milk. This is surprising given the economic incentive to find the answers. Scientists reckon 23% of the variation in milk protein yield is inherited. And this in turn implies that once the main genes that account for this 23% are identified, breeding programs designed on the basis of genetic features could lead to cows with especially high-protein milk.

RNASE5 encodes a protein called angiogenin, which has a long list of known biological roles. It is produced in many different cell types and seems to partially regulate ribosomal RNA synthesis, meaning it acts as a potential bottleneck in many kinds of cells’ protein production lines. Going into the recent study, no one knew whether angiogenin has a role in lactation. What was known, however, was that angiogenin occurs in slightly different forms because RNASE5 does as well. Hayes’s hypothesis is that these different forms of RNASE5 explain variation in the protein levels found in cow’s milk.

Indeed, the results of the study demonstrate that RNASE5 does alter milk protein levels—and that different versions of the RNASE5 gene, or perhaps of the genes that regulate this gene, explain some of this variation. So, at least in theory, farmers could henceforth purchase bull sperm according to how likely the resulting progeny are to inherit genes for milk with high protein levels. Welcome to the future of farming. Welcome to a future where genetic selection nudges out selection reliant upon visible traits and educated guesswork.