The Future of HIV, with Tenascin-C 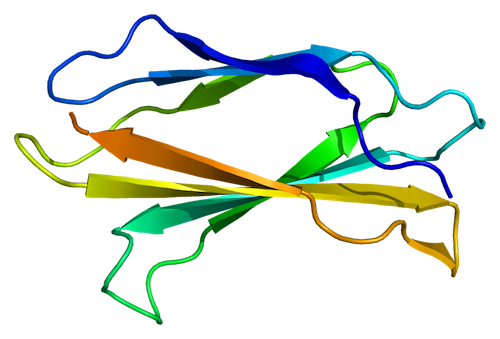 It has been two decades since breast milk researchers realized that some chemical details of their favorite liquid of inquiry are protective against HIV infection. The protection is far from complete, but it is evident in a statistical anomaly: more than 90% of infants exposed to HIV through the breast milk they drink—their mucosal membranes doused with the virus every few hours, for about two years—never catch it.

Back in 1995, a multi-purpose protein, called lactoferrin, was found to contribute to this effect[1]. More recent studies have focused on smaller sorts of molecules, such as sugars called oligosaccharides[2, 3]—and on antibodies. Indeed, it was while they were investigating antibodies that Sallie Permar and her team from Duke University Medical Center in Durham, North Carolina, realized they were missing the point.

To be sure, the control milk samples in their experiments—the samples lacking the antibodies under investigation—couldn’t quite muster the same level of HIV-neutralizing activity as those containing these antibodies, but these control samples somehow still seemed able to get the job done. After some head scratching, the team shifted focus. They separated the contents of their control milk samples into groups of proteins, or fractions, to try to isolate what caused the effect. Soon enough, the answer became clear: only one protein appeared in the fraction that could neutralize HIV and never appeared in any of the other, ineffective fractions. “That was a bit of luck,” admits Permar. This protein was tenacsin-C, a wound-healing molecule. The academic literature had already noted that it occurred in breast milk, but, until this moment, no one really knew what it was doing there.

In the 14 months since Permar and her team first published[4] a description of tenacsin-C’s HIV-neutralizing mechanism, progress has been swift. ‘Step one’, as Permar calls it, of a simple strategy to empower the tenascin-C that occurs naturally in HIV-infected mothers’ milk, has been achieved. This strategy involves hiking the levels of certain antibodies in breast milk—which appear to function in concert with tenascin-C, boosting its effects—by giving new mothers a fairly run-of-the-mill vaccination. ‘Step one’ was to show this works in monkeys [5]. “We were able to use intranasal vaccination [a few drops in the nostril] in lactating nonhuman primates, to produce very strong immunity, specifically in breast milk,” explains Permar.

Of course, there are many more steps before this could become a common HIV- prevention strategy. A key concern, for example, is whether the immune systems of HIV-positive mothers, potentially already badly damaged by the virus, will be able to generate lots of antibodies in response to immunization. But if they can, a simple nasal vaccine has the potential to prevent many infant infections annually, partly because vaccines can be a one-off affair.

By comparison, anti-retroviral drugs (ARVs) come with the chore of daily adherence. “It is a severe misconception to think that anti-retroviral prophylaxis has taken care of mother-to-child transmission—and I don’t think that access to the drugs is the problem,” says Permar. “We still have a quarter million infants becoming infected annually—and that’s despite having ARVs widely available.” Often HIV-infected women are highly motivated to stick doggedly to their drug regimens during pregnancy, but adherence tends to drop off rapidly after they’ve given birth. This tendency is as true for the US as it is for the developing world—but only in the poorest corners of the planet does an absence of clean drinking water make infant formula more likely to kill a young child than giving him or her breast milk that is laced with HIV.

A problem with the current global ARV-centered strategy to prevent mother-child transmission of HIV, says Permar, is that it pays little attention to the possibility that HIV-negative mothers might catch the virus over the course of pregnancy, or while they are breastfeeding. “If you’re breastfeeding for two years, that’s a long window of time during which you can acquire the virus…. [As a result] it may be worth immunizing every mother in some areas.”

The vaccination idea[6] is certainly not the only way of using tenascin-C’s activity to cut infection rates. The protein works by sticking to an ‘envelope protein’ on the outside of the virus; when this happens, the envelope protein changes slightly at another location—the part that it uses to attach to immune system cells (or, put simply, to infect people).

Rather than focusing on boosting tenascin-C activity through vaccination, tenascin-C could be added separately to food, as another method of increasing protection. That might be particularly helpful in cases where individual mothers happen to produce relatively small amounts of it in their milk. (The natural variation in tenascin-C’s concentration in breast milk has about a ten-fold range.) For a food supplement to be a practical option, however, a cheap and ready source of tenascin-C would be necessary.

This is where most of the team’s effort has gone since their original discovery. “We’ve come up with some methods to purify it from breast milk, so we know that is possible,” points out Permar. It’s also present in cow’s milk, but the team has yet to figure out exactly how closely the cow-version of the protein matches its human cousin in function. That aside, they have already managed to create—and patent—a recombinant version of tenascin-C that works pretty well.

Yet the main use for this might be elsewhere. HIV-blocking food supplements are all well and good for infants, but adults almost never catch HIV through their digestive systems—rather, they catch it through sexual activity. It is in this vein that research into tenascin-C could lead to its most important manmade application.

Microbicides are creams or gels that are applied inside the vagina or rectum to protect against sexually transmitted diseases. It seems likely, if tenascin-C were to be added to them, that these creams might prove to be better at fending off HIV. That is an exciting idea because there is plenty of room for improvement; recently, a microbicide trial was much-fêted for reporting[7] a reduction in HIV risk of 39% compared to placebo. There are, of course, many concerns—but toxicity, obviously, should not be one of them. “It should be exquisitely safe,” says Permar, given that human bodies produce tenascin-C anyway. “I mean, babies drink it every day!”

7. The CAPRISA 004 Microbicide Study (Reported at the 2010 International AIDS Conference, Vienna). For an explanation see: https://www.aids.gov/hiv-aids-basics/prevention/prevention-research/microbicides/