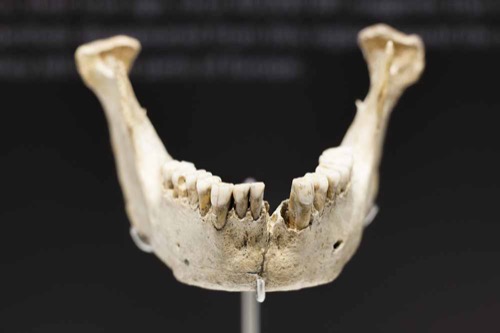 New parents use baby books to record the dates of all of their child’s firsts—when they first eat solid foods, take their first steps, cut their first tooth, and say their first words. These books tell part of the child’s life story, allowing parents to reminisce years later about when all of these exciting milestones happened in the life of their child. Researchers that study the evolutionary history of humans are similarly interested in knowing the dates of these developmental milestones in order to recreate life stories for fossil skeletons (albeit for the less sentimental reason of comparing to living humans). Amazingly, teeth—even those from individuals that died hundreds of thousands of years ago—act much like doting parents, capturing every day of childhood as they grow.

This Will Go Down on Your Permanent Record

Teeth are the only part of the skeleton that interacts directly with the environment; the dentine (the tissue making up the inner core of a tooth crown) and enamel (the tissue making up the outer core of tooth crown) that are secreted daily during tooth growth incorporate molecules from food and water. And because dentine and enamel never remodel, these environmental interactions are permanent. (This permanence is great for paleontologists who study them thousands of years later but not so great for someone with damaged enamel.)

In 2013, Dr. Tanya M. Smith, Professor at the Australian Research Centre for Human Evolution at Griffith University, and her colleagues demonstrated that in both living humans and rhesus macaque monkeys, the levels of barium (relative to calcium) in teeth reflected known dates of dietary changes across infancy, nearly to the day [1].

“Barium is a trace element that passively follows calcium,” explains Smith. “It gets locked into bones and teeth, save for prenatally when it is blocked by the placenta.” As a result, the first appearance of barium in the teeth corresponds with the introduction of mother’s milk. Smith and her team found that barium levels remained elevated in teeth until the introduction of solid foods, at which point they slowly decreased, but remained moderate, as mother’s milk made up less and less of the infant diet. The signature for cessation of nursing corresponded to the point where barium levels first reached their minimum, or prenatal, level [1].

Having established the validity of this barium timeline in living individuals, the team applied the same methods to a fossil tooth of an 8-year-old Neanderthal child from Belgium that died approximately 125,000 years ago [1]. Did the Neanderthal have a life history pattern like that of modern humans, weaning relatively early (sometime between 2 and 3 years of age) or were they more similar to the other living apes with a later age of weaning (chimpanzees wean between 5 and 6 years of age and orangutans between 8 and 9 years of age)? [2]. Unfortunately, this tooth was unable to answer that question. The barium levels in the Neanderthal tooth dropped abruptly, rather than gradually as would be indicative of the weaning process, when the child was approximately 14 months old. This sudden decline was interpreted as an interruption of normal nursing patterns rather than the age of natural weaning for Neanderthals [1].

That the child survived this early nutritional interruption suggests that Neanderthals, like modern humans, could wean at 14 months of age. But the differences in the barium signature between the Neanderthal tooth and that of living children known to wean more gradually strongly suggested that this tooth more likely represented an exception among Neanderthals rather than the rule.

Without a definitive answer, the team looked for more teeth from our evolutionary cousins to analyze. But unfortunately, this type of research is not as simple as walking into a museum, looking at a tooth, and returning it intact. “Curators are charged with protecting the fossils in their care and are typically loathe to allow someone to cut a tooth in half to remove a tiny slice,” says Smith. When given access to two molars from Neanderthal children from the French site of Payre, Smith and her team made the analyses worth the damage they inflicted on the 250,000 year old teeth [8]. In addition to looking at barium to answer questions about the duration of lactation among Neanderthals, they also took on the time-consuming task of quantifying the ratio of two different oxygen isotopes, which would tell them about paleoclimate [3].

Alexa, What’s The Weather in The Middle Pleistocene?

Using a tool called a sensitive high-resolution ion microprobe, or SHRIMP­—aptly named considering it was housed at the Australian National University—Smith and her team measured the amount of oxygen with 18 atoms (the heavy variant) compared with oxygen with 16 atoms (the light variant) in each of the molars [3]. During warm periods, surface water is higher in the heavy variant; during cool periods, the light variant is more plentiful. As individuals drink water (or breast milk) from their environment, the growing teeth incorporate different proportions of each type of oxygen and provide a Pleistocene weather report that rivals modern day meteorological forecasts in accuracy.

“We are sampling a few days of tooth formation every week or so,” explains Smith. “My error estimates suggest that we are able to time this accurately to within a few weeks of the actual ages in primates of known histories.” From a 250,000-year-old child’s tooth, Smith and her team are able to say what the climate was like when the child was born and when they were weaned, within a few weeks. For some perspective, oxygen isotope data from deep-sea cores capture climate patterns over thousands of years, and only allow paleoanthropologists to speak to whether a fossil specimen lived during a cool or warm period. In contrast, the oxygen isotope layers from teeth allow Smith and colleagues to pinpoint events in the individual’s lifetime to particular seasons.

One of the children (Payre 6) was born in the spring and weaned approximately 2.5 years later in the fall. (Unfortunately, the other child’s tooth could not be analyzed for barium due to contamination from surrounding soils.) Is 2.5 years a more likely age of weaning for Neanderthal infants? It is impossible to generalize from one individual to an entire species (just imagine selecting one living human to represent the age of weaning for infants today), but the similarity to the natural age of weaning among nonindustrial modern humans is intriguing. Humans are the odd man out across the apes when it comes to age of weaning; knowing that Neanderthals match us, more so than other living apes, tells us that they might have a life history pattern more like us as well (e.g., same age at first reproduction, same interbirth interval).

Who Tells Your Story

Smith ended a recent write-up [4] of this research project with the subtitle “More Teeth Needed,” and that is a pretty succinct way of discussing the next steps in this field of study. Hopefully, more and more collections managers will see the value in sacrificing teeth in order to reveal more life stories of human ancestors. So much of paleoanthropology is inference from a small handful of individuals (of which many are incomplete skeletons) to an entire species. What a quantum leap to being able to say—with precision!—what an individual actually experienced during their lifetime, and then aggregating those experiences to describe a population.

4. Smith TM. 2018. What teeth can tell about the lives and environments of ancient humans and Neanderthals. The Conversation. https://theconversation.com/what-teeth-can-tell-about-the-lives-and-environments-of-ancient-humans-and-neanderthals-104923