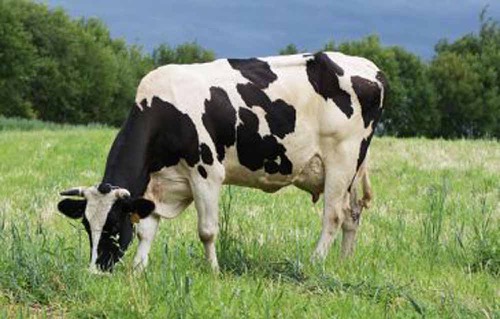 The reason that milk is opaque and white is that it is full of very small beads, or globules, of fat. What may surprise milk drinkers, though, is that these globules are highly structured, having a center composed of three-tailed fatty acids, surrounded by a membrane of quite different chemical structures. The size of these globules varies a great deal, in ways that matter for industrial processes like cheese making, and defining how much of the fat in milk is saturated, The latest research into milk fat globules has taken some bold steps: the aim is to feed cows differently, monitor how this changes the size of the globules in their milk, and work out what exactly is going on in their udders as a result.

The cows assisting in this pursuit are Israeli-Holsteins, living on an experimental farm not far from Tel Aviv. They have swapped between two diets. For a few weeks they have been eating what they normally do, what is known in the dairy business as 35% forage and 65% concentrate—meaning that that a minority of what their energy comes from grazing, and the majority comes from what is laid out for them in troughs by the farmer. Then for another few weeks, this balance was reversed—35% concentrate and 65% forage. The order of these diets has been different for different cows.

Meanwhile, scientists at the Hebrew University of Jerusalem have been measuring the size of the milk fat globules that have come out of the cows [1]. Milk fat globules can be as ‘teeny tiny’ as 200nm, and as ‘merely tiny’ as 15µm, which is 75-fold difference in diameter. Often, when scientists monitor milk chemistry, they measure only the average globule size. But, an increase in the average wouldn’t distinguish between slight upward shifts in the sizes of the range of globules and a singular hike in the relative amount of one quite-large kind of globule. Hence, Nurit Argov-Argaman and her colleagues took a more detailed approach.

It paid off. They noticed that when the cows were on the high-forage diet, the average size of the fat globules in their milk increased. Their milk contained many more globules with a diameter of 3.3µm. A few other changes happened. The high-forage diet led to slightly lower levels of lactose and slightly lower concentrations of fat overall, while milk protein levels didn’t budge. The new prominence of fat globules measuring 3.3µm in diameter, was linked to changes in the relative abundances of particular fatty acids—specifically, to rises in the concentrations of capric and lauric acids and a reduction in the amount of oleic acid.

What does this say about how udders respond to changes in diet? How does it help cheese makers and those of us watching our cholesterol levels? When cows eat differently, the membranes of the mammary epithelial cells in their udders—from which milk fat globule membranes are made—must change. What Argov-Argaman and the coauthors suspect occurs is an enrichment of these membranes with something called PhE (which has the clunky full name: 1,2-dioleoyl-sn-glycero-3 phosphoethanolamine), alters how readily nascent lipid droplets fuse together, and so influences their size. Cheese makers might wish to advise their farmers on cow feed if 3.3µm globules alter the physiochemical characteristics of their particular product. As for the rest of us, capric acid—unlike most saturated fats—should present no health bother [2] for people watching their cholesterol.

Of course, these findings are based on a comparison of milks resulting from just two cow diets. Across the pastures and among the herds of the world, there is a lot more variation than that. Argov-Argaman and her team, and any other research group that wishes to get in on the act, may yet have plenty more to say.