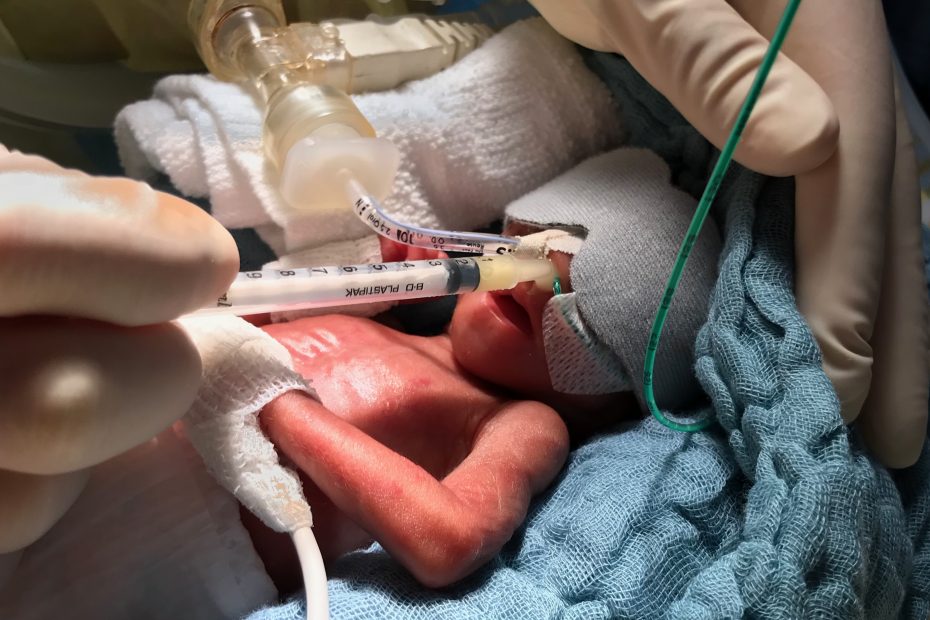 At the NICU at the Hospital for Sick Children in Toronto, Canada, Dr. Rebecca Hoban spends long days treating preterm infants born between 25 and 36 weeks at gestation. A common complication among her tiny patients is intraventricular hemorrhaging, a complication that occurs when the underdeveloped and fragile blood vessels in the brain rupture, and blood pools into the fluid-filled ventricles surrounding the brain [1]. There is no effective treatment for intraventricular hemorrhaging, and neonatologists like Hoban are interested in exploring a potential new therapy using human milk given through the nose. In a first prospective trial, Hoban and her colleagues tested the safety and feasibility of such a therapy for preterm infants and presented their findings at the Pediatric Academic Societies meeting held in Denver, Colorado, earlier this year [2].

“Human milk has stem cells and other bioactives,” says Hoban. “That’s why we think it’s so helpful.” By administering milk through the nose, Hoban hopes these stem cells and other neuroprotectants could “potentially reduce inflammation and damage” through a more direct route to the brain. Down the line, intraventricular hemorrhaging can lead to neurodevelopmental problems such as hydroencephalus or cysts in the brain called porencephaly [1].

Previous studies have shown that human milk fed to preterm infants in the NICU helped with long-term neurological outcomes [3]. However, the milk is typically fed using a gavage tube, a tube that runs from the nose to the stomach and bypasses the nasal passage to the brain [4]. In healthy breastfeeding infants, the mother’s milk often gets into the infant’s nasal cavity [4]. For this study, scientists were interested in the more direct route from the nose to the brain. Past studies conducted in neonatal mice have found that growth factors from milk helped promote recovery after brain damage [5].

Furthermore, a previous study retroactively examined 31 cases of preterm infants with severe intraventricular hemorrhaging, 16 of which were given nasal drops of human milk. Although the study results were not statistically significant, infants who received intranasal breast milk trended toward lower incidences of severe brain defects. The authors noted that future studies should be conducted with scientific controls, and highlighted the need for research into intranasal milk treatments. Very little is currently known about the mechanism behind how milk might attenuate brain damage in neonates [4].

In the newly presented research, Hoban and her colleague’s goal was to prove the safety and feasibility of giving intranasal milk, and to help develop a framework for future research that looks at the efficacy and long-term effects of the treatment [2].

The study was conducted on 37 infants who were under 33-weeks gestation and diagnosed with intraventricular hemorrhaging. Hoban and her colleagues used a small, oral syringe to carefully give infants doses of 0.2 mL of their own mother’s breast milk administered through the nose. If tolerated, the dosage was increased to 0.4 mL to a goal of 1.6 mL a day. The study took note of treatment tolerance, adverse effects, and other health measures [2].

“Our prospective trial in Toronto, the first in the world, showed that these preterm infants were able to tolerate nasal milk therapy through 28 days of life without major safety events,” says Alessia Gallipoli, one of the study co-authors.

One of the challenges, Hoban says, was figuring out the logistics of giving the infants their mother’s milk within 2–3 hours of lactation, as the parents were not always present or ready to provide milk. Given the nature of the study, finding enough study participants was also a lengthy process.

Future analyses will look at the efficacy of intranasal milk therapy and assess the longer-term effects to see if incidences of severe brain damage is reduced [2].