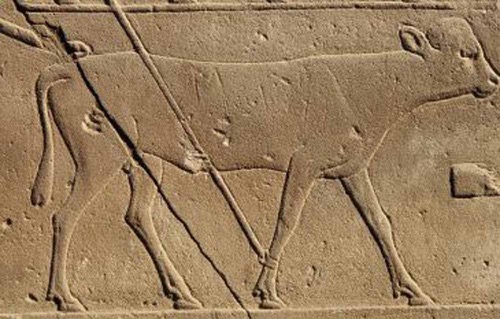 Farming was a transformational technology that began the expansion of human populations and created settlements leading to the emergence of civilization. The origin of farming can be traced to the region known as the Fertile Crescent, which covered the area from modern Egypt around the eastern Mediterranean to Anatolia, the southern Caucasus mountains in the north, and the Euphrates and Tigris valleys in the east. Archaeologists have discovered evidence of early crop production from before 11,000 years ago and have traced the spread of agriculture in all directions from this region. One of the remaining questions is whether local hunter-gatherer populations across Europe and southern Asia learned about farming from afar and began their own farming culture, or whether Neolithic farmers migrated and brought agriculture and settlement with them. So, who were these ancient farmers, where did they come from, and where did their descendants emigrate?

The advent of modern genomics and an increasing number of fully sequenced animal and plant genomes have given rise to the field of paleogenomics, which has provided new insights into the genetics of human populations. Detailed analysis of ancient DNA is providing clarity on the genetic lineages of prehistoric humans and identifying patterns of migration. Some recent research analyzed DNA from Neolithic farmers and defined the origins and spread of agriculture in ancient times [1-3].

The introduction of agriculture had an enormous social and genetic impact. Farming led directly to a shift from nomadic to sedentary populations, and eventually gave rise to early civilizations where food security enabled social activities that were free from the daily imperative to find food. Population expansion and the demand for resources provided the most likely driver for migration, but determining whether the spread of agricultural technology was coincident with the migratory patterns has been a difficult question to address. Did the idea of farming, and/ or the technological knowledge underlying Neolithic agriculture, propagate human expansion or was it the migration of farmers? What happened when migratory farmers met hunter-gatherer populations? They possibly pushed out hunter-gathers, or mixed with the local people, or did hunter-gatherers adopt the technology and form their own settlements ahead of the migrating farmer peoples? These are the issues where paleogenomics is providing new insights.

Ancient DNA is the term used to describe samples of DNA derived from prehistoric sites. Scientists have developed the techniques to painstakingly extract very small amounts of DNA from the most incredible sources, such as the inner ear of a human buried more than 10,000 years before the present (B.P.). Preserving these precious specimens and maintaining their purity, in an environment that is potentially contaminated with remnants from microbes, plants, animals, and even other humans, is a highly specialized skill. These scientists are truly the sleuths of the DNA research world.

Archaeological evidence provides a picture of the Neolithic farmer who cultivated wheat or grass, fed grain to livestock and harvested manure to fertilize crop production [4]. From some of these archaeological sites, ancient DNA has been isolated from the remnants of individual farmers. Just six samples, from an area that straddled the Aegean Sea between Greece and Turkey established a continuous genetic relationship between the populations and linked the earliest European farmers directly to those of the Near East [2]. Paleogeneticists were able to do this because of the power in having genomic sequence data from modern populations to compare with the data obtained from ancient DNA from specific regions. Using a similar approach, Brousaki et al. [1] compared DNA from Neolithic farmers found in the Zagros region of Iran with DNA of modern-day populations, and they found that there was a distinct migration from that region towards the east. There was no evidence that these farmers contributed to the European spread of farming, but there was very strong evidence that they were ancestors of populations living in modern-day Pakistan and Afghanistan [1]. A third study isolated ancient DNA samples from 44 individuals that lived in different sites from the Southern Levant (in the region of modern day Israel and Jordan) to the Zagros Mountains, and ranged in age from about 14,000–3,400 B.P. [3]. They merged these data with existing data to generate information on 238 ancient people and compared it to the data with that from over 2,500 modern day individuals. They found that the farmers from the northern site were distinct from those in the south, and showed that their ancestors were the hunter-gather people of their respective regions. When comparing the DNA from ancient peoples with that of modern populations, they concluded that there were distinct migratory patterns to the north and east from the Zagros region towards Europe from Anatolia, and towards East Africa from the Southern Levant.

Cultivation of grasses and crops were the first signs of farming, but domestication of animals was also evident in the early Neolithic period. The mobility of farming animals provided an impetus to move in order to expand or secure pastures and had the capacity to enable migration by providing a source of food. This was evident in the spread from the Zagros region towards the steppes where farming of animals flourished. The earliest animals to be domesticated were probably goats and sheep, perhaps as long ago as 11000 B.P. Cattle (Bos taurus) were first domesticated in the Taurus mountain region of Anatolia around the same period [5,6]. Milk use for nutritional purposes was probably coincident with the domestication of the cattle [7]. The use of milk to generate dairy products, particularly cheese, was evident in the Near East from at least 9000 B.P. [7]. This technology spread with evidence in Eastern Europe 8000 B.P., Britain in 6000 B.P., and 7000 B.P. in North Africa [8,9]. By 5000 B.P., farming had reached the furthest western point in Europe—Ireland—and recent evidence suggests even the early farmers of Ireland had a direct genetic link to the farmers of the Near East [10].

The agricultural revolution of the Neolithic period was the most significant advance in human pre-history, and set the direction for the genetic diversity and population expansion of Europe. Cattle herding and the early adoption of dairy were an integral part of its success. The value of milk in the human diet is emphasized by the spread of lactase persistence, which expanded after beneficial mutations arose in a central European population around 7,500 B.P. [11–13]. The rapid spread and relatively high frequency of the allelic variants in European populations suggest an evolutionary advantage from the capacity to digest lactose in adulthood. The most plausible explanation is the high nutritional value of milk and its potential contribution to successful survival during conditions that may have otherwise led to starvation.