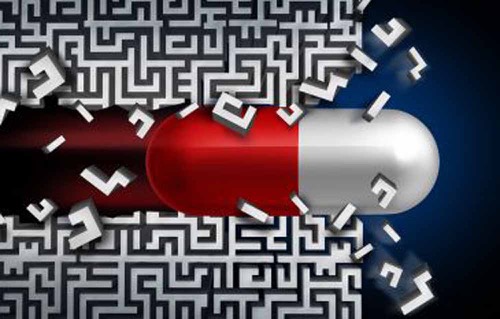 The ability of lactoferrin to kill infections due to bacteria, fungi, and viruses in the first few months of life has long been recognized as one of the big benefits of breastfeeding for newborns. The antimicrobial prowess of lactoferrin is based on a tiny, six amino acid-long stretch of the protein called lactoferricin [1]. Researchers have long tried to exploit this peptide as an effective antimicrobial agent. Successes have been achieved, but the search for even better strategies continues.

A recent paper in Chemical Science [2] has brightened the outlook for the therapeutic use of another lactoferrin peptide—this one a tiny six amino acid-long fragment. By replacing two of the amino acids in the peptide, scientists from the National Physical Laboratory and University College London in the United Kingdom created a structure that contains what the researchers describe as a “self-complementary sequence.” The presence of this sequence causes the peptides to associate with one another. The result is the formation of hollow capsules that are uniform in size, ranging between 20 and 200 nm, about the size and shape of those formed by certain types of viruses.

The capsules have a double-whammy effect. The first effect is the destabilization of the lipid-based membrane that normally functions to keep cells intact and alive. To demonstrate this destabilization, the researchers formed bilayers of lipid in a solution. Lipids that are a part of biological membranes have two portions—one, termed the tail, associates with water (hydrophilic) and another, termed the head, which does not associate with water (hydrophobic). In a water-based solution, the lipids will spontaneously form a two-layered structure in which the tails are exposed to the solution with the heads sandwiched between. In the sandwich analogy, the slices of bread are the lipid tails and the filling constitutes the lipid heads. A compound that can be detected is then introduced in the solution on one side of the bilayer. The solution on the opposite side is free of the compound. Destabilization of the bilayer can then be revealed by the movement of the compound to the other side of the lipid bilayer. In this way, the researchers demonstrated the ability of the capsules to bind to the bilayer and render it leaky. Further sleuthing indicated that the leakiness was due to the formation of pores made of the lactoferrin peptide in the lipid bilayer.

For bacteria, a leaky membrane does not bode well. The researchers tested whether the results in the lipid bilayer experiment extended to real-life bacteria with different types of membranes. They focused on two species of Gram-negative bacteria capable of causing infection (Escherichia coli and Pseudomonas aeruginosa) and the Gram-positive pathogen Staphylococcus aureus. For all three, suspensions of live bacteria were decimated following addition of the lactoferrin peptide capsules.

The second cell-fighting effect of the capsules relies on their hollow shell structure, which allows the capsules to be exploited to transport molecules inside cells. The target cells can be bacteria or mammalian cells. In the case of bacteria, the aim would be to ferry a toxic molecule inside bacteria. For mammalian cells, the aim is to use the capsules in gene therapy. This therapy can proceed two ways. In one approach, a defective gene in a cell is replaced and the beneficial function associated with the defective gene is restored. In the other approach, a gene associated with an undesirable function is blocked and the molecule it codes for is not manufactured. This binding-followed-by-transport route occurs naturally when certain types of viruses infect cells, which lead the researchers to dub the capsules “synthetic antimicrobial viruses.”

As a proof of the gene therapy concept, the utility of the capsules in blocking genes in cancer cells was explored. In one experiment, the lactoferrin peptide capsules containing a fluorescent probe were exposed to the cancer cells. The cell interiors fluoresced, confirming delivery of the payload inside the cells. Next, the researchers packed the capsules with a type of ribonucleic acid (RNA), termed small interfering RNA (abbreviated siRNA). Many siRNAs exist—each one targets a unique stretch of another RNA species. The binding between the RNA types blocks the manufacture of protein [3]. When the capsules contained various types of siRNAs, production of the messenger RNAs that carry the information for various cancer cell proteins was shut down. Supplying empty capsule alone did not shut down protein manufacture.

The upshot is that the altered lactoferricin capsules can destabilize biological membranes and can ferry molecules inside bacteria and mammalian cells. From tailored destruction of disease-causing microbes to human gene therapy, the lactoferrin peptide capsules have significant potential.