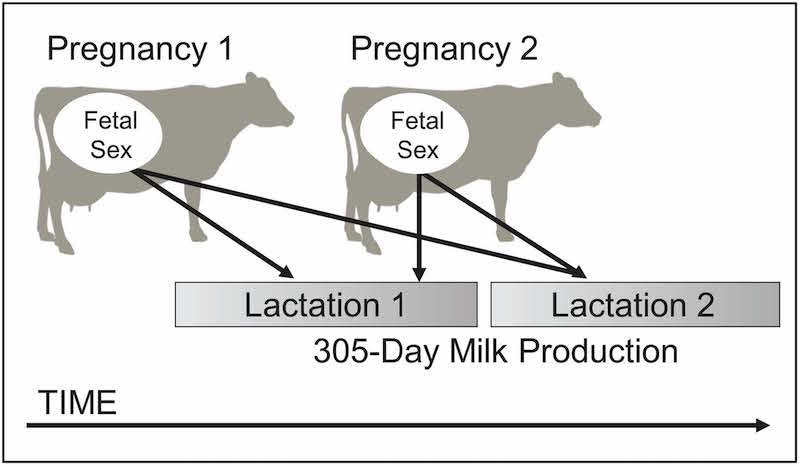 Functional development of the mammary gland occurs during pregnancy. When dairy cows and goats are gestating twins, mammary gland development is amplified due to hormonal signals from the much larger fetal-placental unit. Carrying twins seemingly programs higher milk production to meet the needs of “double the trouble” (Nielen et al., 1989, Hayden et al., 1979). But what if fetal-placental signals aren’t just about the number of offspring, what if other features are signaled that influence milk production, features like infant gender (sidebar: dairy scientists use the term “gender,” evolutionary biologists use the term “sex”)? Sex-biased lactation has received substantial research effort in the last few years, has been documented in humans, monkeys, rodents, deer, and marsupials, and was featured in a 2012 SPLASH column. But how does the mammary gland “know” that milk is being produced for a son or a daughter?

In collaboration with Barry Bradford and Abigail Kennedy, Kansas State University and John Clay, Director of the Dairy Records Management Systems, we used 2.39 million lactation records from 1.49 million Holstein dairy cows from 1995 to 1999 to investigate whether the sex of the fetus influences the capacity of the mammary gland to synthesize milk during lactation. Standardized husbandry practices, systematic milking procedures, detailed record keeping, and large sample sizes make the dairy cow a powerful model for the exploration of milk synthesis from both mechanistic and evolutionary perspectives. Notably, calves are removed from the dam shortly after birth, allowing us to specifically investigate prenatal mechanisms of sex-biased milk synthesis independent of postnatal maternal care and suckling behavior.

Holsteins bias milk production in favor of daughters, not sons. Across a standard 305-day lactation, total milk production was significantly higher after gestating a daughter, ranging between ~100-150 kg more milk across lactation (220-310 lb). This effect was strongest in cows during their first lactation, likely because substantial changes occur in the mammary gland the first time it gears up for milk synthesis. The percentage of fat and protein in milk did not differ between cows that gestated a son or daughter, so the “quality” of milk was the same. But because the “quantity” was higher after gestating a daughter, the total kilograms of milk fat and protein after gestating a daughter were higher than after gestating a son. This sex-biased milk did not occur when farmers used bST (recombinant bovine somatropin) on multiparous cows, indicating that bST exerts a stronger effect on the mammary gland of a cow that gestated a son. But bST use for cows on the first lactation did not “overcome” the effect of fetal daughters. These data suggest that cows on their first pregnancy are particularly sensitive to fetal sex. How does the fetus mechanistically influence milk synthesis? It’s likely that hormones from the fetus and placenta may differ between fetal sons and daughters, subsequently enter the maternal bloodstream, and affect the milk producing cells in the mammary gland.

But fetal sons and daughters don’t just affect the current lactation. Dairy cows are often concurrently pregnant and lactating, typically 200+ days of the 305-day lactation. We restricted a new analysis to a smaller conservative, longitudinal dataset of the first and second lactations for individual cows (N=113,750 cows) with no cases of dystocia (calving score 1 or 2 indicating no or little difficulty during parturition), and no reported administration of bSt. Fetal sex interacted dynamically across lactations, in part because the second pregnancy overlapped with the first lactation. Cows that gestated a son and then another son synthesized significantly less milk during the standard 305-day first lactation. Cows that first gestated a son and then a daughter on the second pregnancy could partially “rescue” 305-day milk production, but total milk production remained substantially lower compared to cows that had a daughter on their first pregnancy. Additionally, cows that had a son on their first pregnancy were handicapped in their milk production, even on their second lactation, and especially if they also had a son on their second pregnancy.  Specifically, cows with two daughters back-to-back produced ~445 kg (~980 lb) more milk across the first two lactations than did cows with back-to-back sons. Yeah, it’s super complicated so we made a “conceptual model.”

Dairy herd management decisions can be informed by the effects we report here, particularly improving the targeted selection of cows artificially inseminated with sex-selected semen. Artificial insemination is standard practice in dairying, and sex-selected semen is widely used. The use of sexed semen with a virgin heifer increases her long-term milk production. Rough, “back of the napkin” calculations, taking into account the current wholesale value of milk, the number of two-year-old heifers added to U.S. dairy herds annually, the production advantage across the first two lactations of conceiving a daughter on the first pregnancy, and the increased probability of conceiving a daughter from sex-selected semen suggests a gross value in the neighborhood of ~$200 million in milk production across the first two lactations in the United States alone. In cows whose first pregnancy yields a bull calf, the use of sexed semen for the next pregnancy can partially recover milk production during the first lactation and increase it during the second lactation. In cows whose first pregnancy yielded a heifer calf, the use of sexed semen for the second pregnancy does not seem to create additional economic benefit in terms of milk production. Moreover, there may be other differences, such as the concentration of micronutrients in milk after gestating a son or daughter. Such information may enhance the formulation of milk replacer for calves.

But can we extrapolate from cows to humans? In the last few years, scientists have reported differences in milk composition produced for sons and daughters among different human populations (Powe et al., 2010, Thakkar et al., 2013, but see Quinn et al., 2013 for no difference), although no info yet on difference in milk volume. Fetal signals may play a role in generating these differences between breastmilk produced for daughters and milk produced for sons.  Humans have a very invasive placenta (Abrams and Rutherford, 2011) that would allow fetal hormones to pass into maternal circulation and possibly influence mammary gland development.  Sex-differentiated milk may provide important nutrients for the developmental priorities of young, such as more calcium for daughters whose skeletons develop faster than sons, as we found in rhesus monkeys last year (Hinde et al., 2013). Further investigations of milk synthesis specific to whether a mother has a son or a daughter could have far-reaching implications for nutritional approaches in the NICU via improved selection and matching of donor milks. Moreover, for women who do not breastfeed or supplement breastmilk, the recipe for infant formulas could be better tailored to the differing physiological needs of sons and daughters. Hopefully, collaborations among animal scientists, clinical practitioners, and evolutionary biologists will continue to yield new insights from already existing data and shape future research directions.

Quinn EA (2013) No evidence for sex biases in milk macronutrients, energy, or breastfeeding frequency in a sample of Filipino mothers. Am J Phys Anth 152:209-216