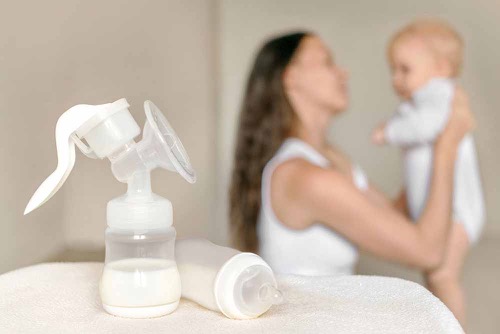 It seems counterintuitive that breastmilk would be anything but sterile—human infants have a naïve and immature immune system and their first food should be free of potential pathogenic organisms, right? But study after study demonstrates that milk indeed contains microbes [1]. Precisely where these microbes originate and how they make their way into human milk, however, is still being worked out. There are two, non-mutually exclusive hypotheses to explain their origins: one argues that milk microbes originate from the mother’s gut and are passed to the mammary gland (entero-mammary translocation) and the other that bacteria from the infant’s oral cavity move back into the mammary gland and influence the types and quantities of bacteria passed via milk (retrograde inoculation) [1, 2]. Because not all milk microbes are equally beneficial for the infant, finding support for one or both of these hypotheses offers the potential of modifying the milk microbiome in ways that could improve infant outcomes.

A new study [2] of 393 mother-infant dyads simultaneously investigated both hypotheses by considering maternal and infant factors believed to influence the milk microbiome, including mode of delivery, maternal BMI, maternal diet, presence of older siblings, and indirect breast milk feeding (i.e., pumping). Milk samples were collected from healthy Canadian mothers between three and four months of lactation and were analyzed for milk microbiota composition as well as other milk components, such as oligosaccharides and fatty acids, that could potentially influence milk microbes [2].

Cluster membership was most significantly associated with feeding method. C1 had the highest proportion of mothers that fed their infants pumped milk (86%), followed by C2 (66%), whereas less than half of the mothers in C3 and C4 engaged in indirect breastfeeding. Breastfeeding mode was also identified as the only consistent factor directly associated with milk microbiota in a more complex statistical model that considered all milk microbes [2].

With two different statistical approaches highlighting feeding method as an important determinant of milk microbiota, the researchers took a closer look at how milk from mothers that only engaged in direct feeding at the breast differed from that of mothers that occasionally or exclusively provided pumped milk. Enterobacteriaceae and Enterococcaceae were more enriched in indirect breastfeeding, as were the potentially opportunistic pathogens Stenotrophomonas and Pseudomonadaceae. Gemellaceae, Vogesella, and Veillonellaceae, a member of the oral microbiome, were more enriched with direct breastfeeding. In addition, species richness (i.e., the number of different species present in the milk) was greater in milks from mothers that provided breast milk directly.

Taken together, these findings offer strong support for the retrograde inoculation hypothesis. Pumping introduces exogenous bacteria to milk but also excludes an opportunity for contact with the infant oral cavity. The reduced species richness in pumped milk suggests a potentially critical role for infant oral microbes in shaping the milk microbiome [2]. Moreover, these findings also highlight the potential for pumped milk to contain harmful microbes that could expose infants to health risks and a lack of species diversity that could alter the development of their gut microbiome. These findings could be used to identify key taxa that may be missing from pumped milk that could potentially be supplemented and to educate parents on the importance of cleaning and disinfecting breast pumps after each use; pumping is simply too integral to women’s lactation plans to advise against providing pumped milk.

Interestingly, the study may have found additional support for the retrograde inoculation hypothesis by identifying sex-specific differences in milk microbial composition and diversity. For example, maternal BMI was found to be a significant factor on milk microbes in mothers with female offspring, whereas breastfeeding mode had a stronger association with male offspring [2]. Could hormonal differences between males and females influence their oral microbiota, which in turn could  influence milk microbes? It is certainly an intriguing possibility, and sex differences in gut microbiomes have been identified. But the study authors also acknowledge that sex-specific differences have been found in other milk components and plan to integrate sex-stratified statistical tests in future studies in order to tease out just how infant sex might be influencing milk microbial communities [2].