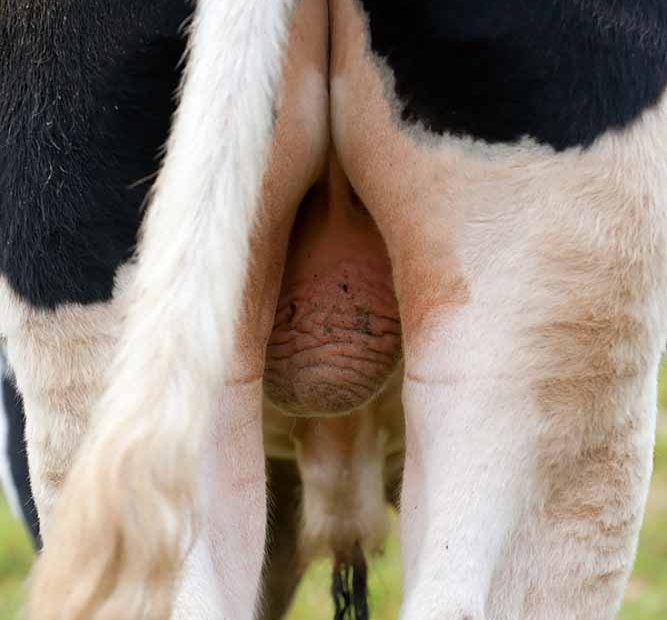 He is legendary, fathering 60,000 daughters, most after his passing to greener pastures. He also sired many sons and grandsons who followed in his immortal footsteps. Walkaway Chief Mark is a name to remember!

Born in 1978, this single Holstein bull is currently responsible for roughly seven percent of the genomes in North American Holstein cows, which now populate many dairy herds throughout the world. He comes from a proud family heritage, which includes his famous father, Pawnee Farm Arlinda Chief, born in 1962. These are “two of the most influential dairy sires in history.”

A recent study by Larkin et al.1 reports the sequencing of the genomes of these two elite dairy sires. Using an innovative approach, the researchers tracked the inheritance of different fragments of the bulls’ genomes, or haplotypes, in over one thousand descendents through six generations. The detail imbedded in this DNA detective story has provided unprecedented insight into the elite genetics underlying the productivity of today’s dairy industry.

The industry has long exploited genetics to increase milk production. Over the last 50 years, an intense selective breeding process used only the best performing animals to improve milk output and composition. Remarkably, the average milk production per lactation has increased 380% from the 1940s to 2005 in the USA!

The improvement is driven by better management practices, particularly selective breeding employing artificial insemination coupled with extensive individual animal production records. Typically, each sire is ranked based on milk production, milk composition, and fertility traits in thousands of its daughters. Only the elite performing sires are then used in breeding programs.

This practice is called artificial selection as it is driven by humans to enhance desirable production traits in a population of domestic animals. It is no coincidence the first chapter of Darwin’s revolutionary book, entitled The Origin of Species, focused on heritable changes in domestic animals. As Darwin alluded in his book, artificial selection is an exploitation of natural selection, the process that causes evolutionary change in a population.

Cattle have 29 related pairs of chromosomes and an X or Y chromosome, which together contain the full complement of the genome (or DNA). Small segments, or haplotypes, of DNA within a chromosome come from either the paternal or maternal genome. A haplotype is simply a group of genes inherited together as a segment of DNA from a single parent. The innovative approach taken by the researchers is called ‘haplotracking.’ It uses small genetic differences in DNA sequence segments to track the inheritance of sire-specific DNA through multiple generations.

Larkin et al. discovered over one million small genetic differences, or single nucleotide polymorphisms (SNPs), in the genomes of Walkaway Chief Mark and Pawnee Farm Arlinda Chief. The SNPs were then used to track haplotype segments characteristic of these elite sires in their descendents over six generations.

Forty-nine haplotype segments were enriched in the descendents, presumably because they harbour genes that contribute to the traits being strongly selected by the industry. From these segments, eleven genes were identified which have roles in milk production, fertility, and disease resistance. Strikingly, some of these genes are already implicated in contributing to economically important dairy production traits. The remaining genes will need to be confirmed in independent analyses.

The scientific strategy used by Larkin et al. exploits the benefits of an artificial and unplanned ‘experiment’ that has been an integral part of the dairy industry throughout the last half century. It demonstrates how rapidly progress can be made towards the identification of genes directly contributing to complex traits, a notoriously recalcitrant area of genetic research.

The challenge now is to find the exact genetic changes in the identified genes subjected to strong industry selection over the last 50 years and then to understand their biological implications.

Perhaps one of the treasures yet to be revealed in this type of study is the potential to identify regions in the genome implicated in dairy traits that lie between genes. These regions are likely to regulate gene activity from afar and may be key to fully understanding the genetics of complex traits like milk production and milk composition.

The potential benefit of this and related studies is the more efficient identification of new elite performing bulls, based on the identified enriched haplotype segments and genes, long before sire-based progeny testing. This has potential to accelerate the introduction of new genetic gain into a population and reduce industry costs. The information may also indirectly provide a quantitative measure of the extent of inbreeding, thereby flagging management intervention to maintain appropriate levels of genetic diversity within a herd. This is a desirable long-term aim.

The DNA from Walkaway Chief Mark and his father, Pawnee Farm Arlinda Chief, have provided a lot of answers. Their legacy is a group of specific DNA segments that is likely to dominate the dairy industry into the future.