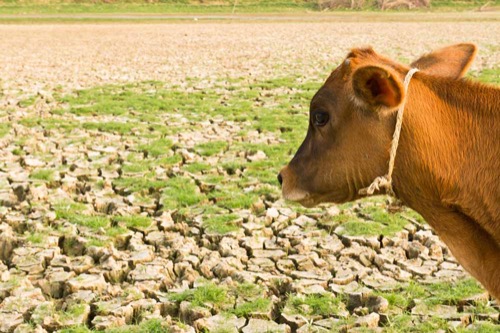 For many regions of the world home to large dairy herds, climate change models predict substantial shifts in the environment. These shifts look likely to harm milk production. The hunt is on, therefore, to define the causal mechanisms by which climatic variations lower milk yields and to figure out ways to keep the cattle of the future comfortable.

The Murray dairy region is a luscious patch of southeast Australia divided among about 1,800 farms. About a fifth of Australia’s milk production is pumped from its udders—and there is more pumped per udder than is average for Australia because of Murray’s temperate climate, according to Dairy Australia, a government-sponsored dairy organization. In early 2013, Dairy Australia and a group of researchers from CSIRO, the national science agency, published some predictions made by combining climate models and milk production data. They anticipate1 that in 2015 Murray’s cattle will experience 12-15 additional days of moderate to severe heat stress compared to what they typically experienced between the years 1971 and 2000. By 2050, there will be 31-42 additional hot days by the same measure.

Murray is far from the only farming community fearing its milk output will drop. A cursory scan of the literature shows that countries as diverse as Israel, Italy, and Thailand are grappling with how climate change is likely to effect their dairy industries.

By how much are we taking? A really thorough examination of this question can be found in a 2013 study2 on almost 24,000 cows in Luxembourg, which considered six different indices of heat and humidity stress. By analyzing how milk output correlated with the weather (as recorded by the country’s public weather stations) between the years 2000 and 2011, the authors found that a drop-off in daily milk production began when the various thermal indices reached scores of a little over 60. But milk fat decreased at even lower scores, and dropped off more noticeably when thermal indices hit 60.

This is somewhat worrying. A score of 72 (on the most commonly used index), which corresponds to 22˚C (72˚F) and 100% humidity, has become accepted in the academic literature as the point at which thermal stress starts to impact milk production3. And that, in turn, suggests that calculations based on those findings might tend to underestimate the problem. The Luxembourg study found that heat-stressed cows produce up to two kilos less milk per day, depending on the degree of heat stress.

Perhaps the most obvious option for places like Murray is to build better barns that can cool their cattle even on the hottest of days. This can be highly effective. In a paper4 last year, a group at the University of Florida, Gainesville, measured circulating insulin (important in early lactation glucose allocation) in two groups of cows, only one of which had been cooled with sprinklers and fans during the heat-stressed days of their dry period. The dry period is when farm milking is reduced and then stopped in advance of calving. It is also when new udder tissue is formed.

As well as building cooler barns, some researchers propose giving hot cows dietary supplements, such as fatty acids or the essential amino acid, glutamine, which both help reduce the decreased fat yield observed in the milk of heat stressed cows5. But a change in genetics—in other words, in breeding strategy—is a longer-term solution. For many decades at least, warm climate breeds like Zebu and Sanga have been crossbred with mega-milk-making Holsteins. These days researchers have the tools to work out why exactly Zebu don’t mind the heat, and what it is about the dairy herds in places like Luxembourg causes them to be so sensitive.

Those working in this field have already pointed to a number of important genes for keeping milk production up during heat stress. A study6 on more than a thousand Chinese Holsteins published in 2011 identified relevant variants in a gene called ATP1B2, which encodes a subunit of a key cellular ion pump. Under heat stress the gene variant denoted by “C2833T” was significantly associated with cows’ body temperature, with the potassium ion levels inside their red blood cells, and with milk yield.

A more recent paper7 in the journal Gene looked at the activity of a gene that encodes a heat shock protein, a type of protein that protects cells from heat stress. The particular protein they studied, Hsp70, is especially temperature sensitive and abundant8. The researchers found patterns relating how well the 200 cows—all Frieswal cross breeds—handled hot weather to the genetic code in a promoter region (or “on switch”) of a heat shock protein gene. One single base deletion from this promoter region, even if it occurred heterozygously (in only one of the two copies of the gene), was linked to significantly lower milk yield in cows chewing cud under the Indian summer sun.

Both studies—and others like them—conclude that the results could be useful in selectively breeding cattle to produce lots of milk in climatic conditions that are currently a struggle for many herds. Much more work is needed in this field. And the dairy industry in regions like Murray should pay close attention.

3. Herbut P & Angrecka S. (2012) Forming of temperature-humidity index (THI) and milk production of cows in the free-stall barn during the period of summer heat. Animal Science Papers and Reports 4:363-372.