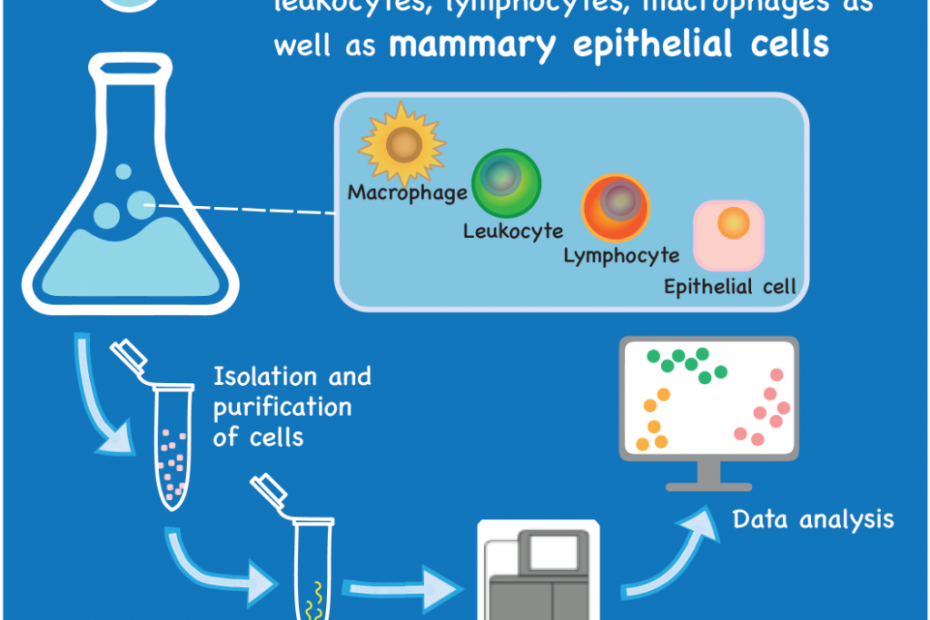 Milk is a complex mixture of nutrients, peptides, and immunological factors [1], yet very little is known about the cells within human milk that make it the ultimate nutritional source for developing infants. Now, scientists have developed a method for using RNA-sequencing to study these little-understood human milk cells [2]. This new technique using single-cell RNA sequencing (scRNAseq) sets the stage for future experiments that will gain an unprecedented understanding of human milk-derived cells and the intricacies of human lactation [2].

“It’s kind of a proof-of-concept. You can acquire highly detailed, useful information using this approach,” says Michael Rudolph, a physiology professor at the University of Oklahoma who co-authored the first paper describing the scRNAseq technique [3]. “The key will be to apply this approach to begin testing hypotheses about maternal function.” One of the primary purposes of applying scRNAseq to milk cells is to understand how factors like diabetes or metabolic disease might hamper lactation in some women [2].

Human milk contains a cocktail of different cell types. Less than 10% of the cells are thought to be immune cells, while the majority are cells that derive from the mammary epithelium and aid in milk synthesis [4]. Jayne Martin Carli, postdoctoral researcher at the University of Colorado and the lead author of the scRNAseq study [3], says researchers aren’t entirely certain about the origin of these cells and how they end up in the milk, and research has been hindered by ethical and practical hurdles in accessing breast tissue from lactating mothers. Human milk samples can be used as a proxy for studying mammary function [3].

ScRNAseq is an advanced genetic technique that details each cell’s individual transcriptome—a process that shows what genes are active in each cell. By applying scRNAseq to human milk-derived cells, researchers can gain novel insights into the different kinds of cells found in human milk and their function. With this approach, researchers can also potentially glean insights on the physiological reasons behind why some women have difficulty producing milk [2]. “We already had broad stores of knowledge of cells that were already there but now we have a much more detailed picture,” explains Martin Carli.

Martin Carli and her co-authors took milk samples from two women with similar BMIs at two weeks post-partum. The samples were centrifuged to collect and isolate the cells, and cryopreserved to arrest the cells in development. Dead cells were identified through staining and removed using a technique called fluorescence-activated cell sorting. The research team analyzed a total of 3740 cells from the samples that were sequenced and characterized [3]. “Once you have your sequencing data it then becomes an exercise in bioinformatics,” explains Rudolph.

Rudolph says he was surprised by the heterogeneity of the cells. “Going in to this I thought it was going to be mostly one particular cell type and that it would be fully functionally differentiated,” he says. “We identified unique populations of cells that may individually contribute to lactation as more of a symphony—it’s a bunch of individual types of cells that cumulatively contribute to manufacturing individual components of the milk, whether its milk protein, fat, or carbohydrates. They seem to have important and individual features that contribute to making milk.”

Additionally, the research team found cells that were in various stages of differentiation. Some of the cells expressed genes associated with progenitor cells, whereas others expressed genes that suggested they were at later stages of maturity [3]. Previous literature suggested the presence of stem cells within human milk [5, 6], but the scRNAseq technique used by Martin Carli was not able to detect any [3].

Whereas the paper published by Martin Carli et al. in the Journal of Mammary Gland Biology and Neoplasia [3] was the first to describe this method, subsequent lab groups have also used this technique with similar results [7, 8]. scRNAseq has also been applied to cow’s milk [9, 10].

Research done by Martin Carli and co-authors gathered a baseline understanding of milk-derived cell heterogeneity, and it represents just the beginning for a wide array of potential research questions using the scRNAseq method. She is focused on studying factors that affect milk insufficiency. “I’m trying to understand how women with diabetes during pregnancy have a harder time making milk for their babies,” she says.

“I’m interested in the mechanics of how things end up affecting the milk composition,” says Rudolph, who gave the example of maybe studying a mother that has COVID-19, and asking what immune cells might appear in her milk.

Graphic Art by Xuan He