Evolving Motherhood: When to Wean Part I 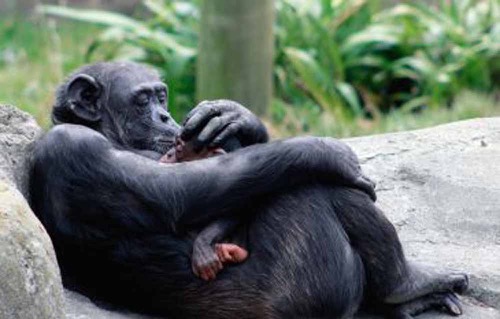 The “evolved” age of weaning is a topic of debate not only among the general public but clinicians and scholars as well. Weaning, however, is not an event—it is a process. When that process begins and how long mothers and infants negotiate milk transfer varies across mother-infant dyads [1,2]. Additionally, adaptations reflect the selection of traits in ancestral populations; changing ecological conditions can lead to a mismatch between adaptations and current ecological conditions. What was once adaptive in landscapes roamed by early humans may not be the best fit in contemporary urban and suburban environments. And lastly, for these types of behavioral biology traits, there is no precise “one size fits all” adaptive threshold.

Discussions of lactation and breastfeeding in humans, particularly duration until weaning, requires consideration of many subjects. Just to name a few topics that immediately come to mind: life history theory, human subsistence patterns, gene-culture coevolution, comparative primatology, population dynamics, cultural relativism, ecology, global health, developmental programming, public policy, economics, equal opportunity, and biopsychology. The complexities of these intersecting topics and their influence on motherhood and infancy are myriad. Oftentimes, research studies are focused within a narrow disciplinary approach, shying away from intersections across social, life, environmental, and medical sciences. Despite these limitations, the current literature provides some opportunity to understand lactation duration and weaning dynamics in primates, shaping what we understand about human weaning.

In primates, weaning is a process, in part, because the “optimal” age of weaning is different from the mother’s and the infant’s perspective. Natural selection has shaped mothers to produce a series of offspring across a reproductive career. Maximizing lifetime reproductive output has favored adaptations to transition from current reproduction to the next reproductive event. The Goldilocks “just right” time point is when weaning doesn’t endanger the infant’s survival or unduly threaten the infant’s well being—but not so long that the mother has appreciably delayed the next reproductive opportunity. An individual offspring, however, is entirely related to himself and only partially related to the mother and the future siblings she’ll produce. This difference of relatedness between oneself and one’s parent and siblings predicts that infants have adaptations to acquire more resources from the mother than she has been selected to provide [3]. From the infant’s perspective, the Goldilocks “just right” time point is later than the mother’s—in order to become stronger and remain buffered from the world for longer. This concept from evolutionary biology is known as parent-offspring conflict, but anyone who has tangled with a weaning tantrum knows what I am talking about.

While nursing patterns reflect a conscious behavioral negotiation between mother and infant, some lactation adaptations, such as milk composition, are operating beyond conscious control of mother or infant. Fundamentally, the divergent genetic interests are predicted to cause a gap between maternal and infant adaptive optima. Mother’s physiological optima for milk production—protecting her condition for future reproduction—will likely be less than baby’s optima for milk consumption that sustains maximal growth. The milk a mother synthesizes will fall somewhere between what is optimal for her lifetime reproduction and what is optimal for an individual baby’s development. This means that, while breastfeeding is the optimal form of infant feeding compared to other available options, breast milk is not necessarily optimal or maximal for infants.

Estimating expected age(s) of weaning for humans as a function of our primate heritage presents highly variable predictions. Values for “age at weaning” across primate species are derived from behavioral observations, inferred from developmental milestones, or measured from biological samples, and they all provide different age predictions for human weaning. Indeed, in many ways we are setting off on a Highway to the Danger Zone. Here I present empirical data, in part because the aggregated life history tables within the order Primates reflect substantial variation in methods, timing of study, ecological conditions, and statistical covariates [4]. Humorously, Lee headed a section in a review and meta-analysis with “Data Sources and Their Problems” [5].

Relying on behavioral observations depends on how weaning is operationalized. Weaning can be the introduction of non-maternal foods—even though many mammals have a period of complementary feeding of mother’s milk and solid foods [6,7]. Perhaps the date of last nipple contact or suckling bout, but sometimes milk isn’t transferred, or milk is transferred in very, very small volume. Night-time nursing may account for much of the milk transfer, [8,9] especially as lactation progresses. A recent study reported weaning age in wild mountain gorillas as intermediate from the month last suckling was observed and the next month for which no suckling was observed [10]. Based on observations of 29 infants, the mean weaning age of mountain gorillas was 40 months, but ranged from 35–50 months. Infants were weaned later if their mothers were first-time mothers or if they lived in multi-male social groups. Observations of wild chimpanzees suggest that offspring are weaned between 4 and 5 years of age [11]. Orangutans likely wean their young even later. But patterns in humans are hard to compare with non-human primates, because behavioral observations during daylight hours are very different than asking human mothers when they weaned their infants.

Weaning age may be more influenced by developmental milestones, rather than a particular age. Lee and colleagues suggest that weaning is “ecologically sensitive” and occurs as infants triple or quadruple their birth weight, instead of a particular age [12,13]. Weaning, therefore, depends on how fast the infant grows. This, in turn, depends on the volume and energy density of milk a mother produces, which is highly variable among individual mothers. However, getting the birth weights of wild primates presents serious challenges, hence most of the data showing this pattern come from captivity. Within the captive setting, ample food and health care accelerate growth and maturation rates, which lead to earlier weaning. Similarly, the ample food and low infectious disease burden in the United States, may contribute to US infants tripling their birth weight within 18 months [14] and quadrupling their weight in 30–33 months (CDC Growth Charts). Attaining these weight thresholds on this timeline may reflect the fastest that human infants can grow and only one end of the weaning spectrum.

Tooth eruption patterns have been used to infer when primates become nutritionally independent— assuming that adult diets rely on the eruption and occlusion of molars (particularly first molars) [15]. Gorillas, chimpanzees, and orangutans [16] have their first molar erupt typically ~3.8–4.6 years of age, substantially earlier than humans. In humans, 1st molar eruption occurs around 5.5–7 years of age [17,18], long after most humans have been weaned. But research demonstrates that inferences from tooth eruption schedules for weaning at the species level have notable limitations [19–21]. In part, this is because average tooth eruption patterns were linked to averages for “weaning age” at the species level, but that tells us little about the variation WITHIN species. Indeed, in a recent study of wild-living chimpanzees, Smith and colleagues [19] found that “first molar emergence in these chimpanzees does not directly or consistently predict the introduction of solid foods, resumption of maternal estrous cycling, cessation of nursing, or maternal inter-birth intervals.”

A river runs through it: lactose and lactase

Something that potentially provides insights into an adaptive timing of weaning is the production of lactase. Baby mammals are able to digest mother’s milk because they produce the enzyme lactase. This lactase enzyme breaks down lactose, the primary sugar in mammalian milk. The gene expression that controls the production of lactase shuts down during development as infants transition into juveniles. As lactase production declines, so does the ability to digest milk, with varying degrees of intestinal distress and stool liquidity. Scholars have hypothesized that the genetically programmed down-regulation of lactase is an aspect of the push-pull of parent-offspring conflict—if kiddo can’t digest mother’s milk, kiddo isn’t demanding it, and mother can allocate milk and energy to the next kiddo [22].

But many humans have “lactase persistence genes” that express well into adulthood allowing humans to digest milk after weaning. Notably, not all humans have genes for lactase persistence. Where reported, the timed onset of declining lactase production occurs around 2 years of age. As stated by Wang and colleagues, “genetically programmed down-regulation of the lactase gene is detectable in children from the second year of life, although the onset and extent are somewhat variable” [23]. However, the end of any lactase production occurs by age 5 or as maybe as late as age 10, depending on the population being studied [24]. Which means that human kiddos without lactase persistence have a pretty wide and variable window for digesting mother’s milk—2–10 years.

These proxies—behavioral observations, growth thresholds, tooth eruptions, cessation of lactase production—remain imperfect, and suggest highly variable predicted ages for human weaning. Rather than relying on proxies of weaning, more accurate methods to directly investigate lactation curves and milk transfer are emerging. Researchers can measure isotopic signatures of milk consumption in feces and teeth, but very few species have been described, so broad comparative analyses aren’t currently possible [25–27]. New data will allow for more comprehensive analyses, but humans are exceptional in many ways when compared to non-human primates. The most exciting insights into human weaning may come not from primate proxies but from cross-cultural comparisons into the complex biocultural weaning of the human species. FIND OUT MORE IN NEXT MONTH’S ISSUE OF SPLASH!®.