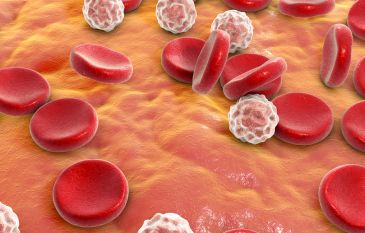 Immune cells are strange beasts. Their favorite occupation, like a child nearing the end of a long summer vacation, is just hanging around looking for something to do. Usually, they just cruise the body in the blood, sometimes detouring into tissues seemingly just because they can. All is good.

During this time, immune cells have only one major function—surveillance. Their immediate job is to identify invading bacteria and viruses that may cause illness. Detection of these foreign microbial agents by the immune cells then causes their activation and the initiation of a robust defensive battle that ultimately destroys the invading micro-organisms. Most battles are victorious, but there is a cost of success—the diversion of chemical energy away from the maintenance of everyday events, like animal growth and milk production, to fuel the defensive immune cell battle.

Production animals are faced with frequent immune system challenges that include not only microbial infections such as mastitis but also chronic gut inflammation caused by feed changes and heat stresses. The energy cost of fueling these immune cell responses has been difficult to calculate and even its approximate magnitude has been unclear.

Recently, a team of researchers from Iowa State University led by Lance Baumgard performed intriguing experiments using lactating Holstein cattle to determine the magnitude of the energy cost of an immune response[1].

The researchers selected lactating Holstein cattle and subjected them to three treatments. The first animal group received an intravenous control treatment consisting of a saline solution. The second group received a small amount of a very potent bacterial cell wall component, lipopolysaccharide or LPS, which is known to induce a strong immune response in nearly all animals, including cattle. The LPS was used to trick the cattle immune system into a robust response to a phantom bacterial infection. The third group also received the LPS but additionally, glucose was continuously infused into the blood to maintain a constant blood glucose level. The cattle were then intensively monitored for a period of twelve hours during which they were fasted to avoid the confounding effects of different feed intakes.

In both of the groups receiving LPS compared with the control group, there were increases in blood proteins characteristic of infections, a striking 80% reduction in milk yield, an approximate 11% reduction in milk lactose percentage, and many diagnostic signatures often accompanying an infection—including mild hyperthermia—but only in the first 1.5 hours after treatment. In the animals that were only infused with LPS there was initially a substantial though transient 84% increase in the blood glucose level in the first 2.5 hours following the LPS treatment. This was likely the result of glucose mobilization from the liver to fuel the energy hungry immune cells activated by LPS in the blood. However, for the remaining experimental time, there was a sustained 30% decrease in blood glucose (severe hypoglycemia, suggesting that glucose resupply from the liver was exhausted. Correspondingly, there was a 160% increase in blood lactate levels (hyperlactemia). The decreased blood glucose combined with increased lactate levels point toward the activation of a biochemical pathway that directly metabolizes glucose to generate energy.

Immune cells preferentially obtain their energy supply from glucose [2-6]. Hence, the amount of glucose infused into the blood of the LPS-treated cattle (the third cattle group) to maintain a constant blood glucose level plus the glucose associated with the reduction in total milk lactose production (lactose is synthesized from glucose) over the twelve-hour period was used as a proxy for the total amount of glucose consumed by the immune cells activated by the LPS.

The researchers concluded that a single acute immune cell response costs the energy equivalent of burning at least one kilogram of glucose over a twelve-hour period [1]. This is a lot of energy unable to be used for direct production purposes! Tellingly, the authors also list a number of biological and technical reasons why this number is likely to be an underestimate.

The study also dramatically demonstrated that lactation was rapidly and severely sacrificed presumably to spare glucose for directly fueling the activated immune cells. The authors hint that this is an evolutionarily conserved response in mammals that strongly prioritizes animal survival over lactation. Thus, the lactation and immune cell activation biological systems are intimately intertwined. The detailed mechanism underpinning the severely decreased milk output after the introduction of LPS into cattle may also involve adverse direct and indirect effects of LPS on the mammary cells synthesizing milk.

Maximizing livestock productivity requires the optimal partitioning of energy resources between competing and often differently prioritized biological systems. Farm animals that have frequently activated immune systems will divert energy resources away from production traits to prioritize immune responses, thereby potentially decreasing productivity. The study of Baumgard and colleagues has now quantified the minimal energetic cost of an activated immune system [1]. The cumulative energy requirements of multiple microbial challenges, dietary changes and heat stress throughout the life of a farm animal are likely to be large. Thus, emphasis on herd management in these areas may yield big rewards.

Clearly, immune defense wins the day (protection from disease), but there is an energy cost to pay.