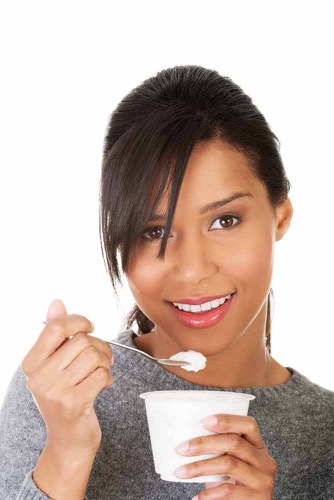 Over the past few years, researchers have found several intriguing links between diet and mental health. For example, unhealthy diets have been associated with a higher risk of developing depression, while healthy diets may instead have a protective effect [1–6]. These effects are thought to be at least partly mediated by the gut microbiome and may be influenced by both prebiotics and probiotics [7–9].

“Some animal studies have shown an association between prebiotic and probiotic consumption and mental health,” says Aurora Perez-Cornago at the University of Navarra. “We wanted to see what happens in humans,” she says.

Along with Miguel Angel Martínez-González and colleagues at the University of Navarra, Perez-Cornago conducted a longitudinal study of Spanish university graduates over more than nine years to examine the effects of consuming probiotic yogurt or prebiotics on depression [10]. The researchers found that eating high-fat yogurt was associated with a lower risk of depression in women.

“Previous studies have determined foods and also dietary patterns or lifestyles that have been related to lower depression rates,” says Perez-Cornago. “This is the first prospective study that has analyzed the association between yogurt and prebiotic consumption and depression risk,” she says.

Perez-Cornago emphasized that the study only shows an association, not cause and effect, and more studies will be needed to make any broader conclusions about whether eating high-fat yogurt can help with depression. “This is very novel area of research, and we need many, many more studies before recommendations can be given to people concerned about mental health,” she says.

Studies have shown that commercial yogurt lowers the risk of diseases such as obesity and metabolic syndrome that have been associated with depression [11–14]. Commercial yogurt that contains a high enough concentration of live beneficial bacteria also serves as a probiotic and could influence mental health through its effects on the gut microbiome.

“There is a hypothesis that the association between diet and depression might be driven at least partially by the gut microbiota and gut health,” says Perez-Cornago. “That’s what promoted us to do this research looking at these specific food groups that are important for gut health,” she says.

The researchers used food-frequency questionnaires to assess the consumption of high-fat yogurt, low-fat yogurt, and prebiotics among 14,539 Spanish university graduates. They then analyzed the association between yogurt or prebiotic consumption and depression.

Perez-Cornago and her colleagues found that consuming high amounts of high-fat yogurt was associated with a lower risk of depression, and this association was only significant among women. There was no association between prebiotic or low-fat yogurt consumption and depression risk.

“We were surprised that we saw differences between high-fat and low-fat yogurt because our hypothesis was that the beneficial bacteria in the yogurt might be the ones that result in this association between yogurt consumption and lower depression rates,” says Perez-Cornago. “Because low- and whole-fat yogurt don’t differ in bacterial composition, this probiotic hypothesis does not appear to fully explain the association that was found in this study,” she says.

More studies will also be needed to figure out why the association between high-fat yogurt and lower depression risk was only significant among women. “Women have a higher incidence of depression than men in general, so they are more likely to suffer depression, but we don’t have any data to explain why women and not men had lower rates of developing depression if they consume high-fat yogurt,” says Perez-Cornago.

Follow-up studies could try to tease apart the associations between yogurt and depression and get at causal mechanisms. “What we think needs to be done are randomized controlled trials with people with depression, to give these participants yogurt to see if it actually decreases depression,” says Perez-Cornago.

Perez-Cornago also pointed out that her study was conducted in a specific Spanish population, and suggested that similar large-scale studies should be conducted in other populations. “Before any recommendation can be given to a general population, especially women concerned about their mental health, we think that we first need to know why there is a difference between low and full-fat yogurt and also need to repeat this in other populations,” she says.

“I think this is a very promising field, but it’s still in its infancy,” says Perez-Cornago. “We need many more studies before any conclusions can be reached.”