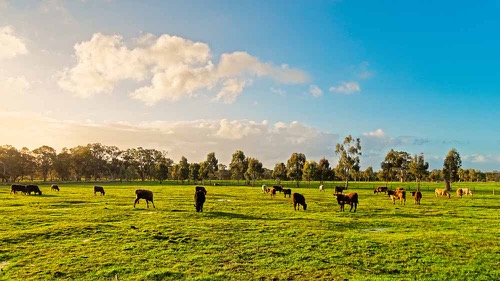 Often, dietary advice is given from singular perspectives. Public health professionals consider nutritional benefits first and foremost. Climate activists, concerned with the carbon footprints of modern lives, frequently lobby for vegetarianism. Few studies have sought to balance these, as well as other potentially competing demands. Yet, the United Nations’ Sustainable Development Goals (SDGs) require balance. They aim for both sustainable consumption patterns (Goal 12), and ending all forms of hunger and malnutrition by 2030 (Goal 2).

Unusually, a recent study in the journal Nutrients calculates in detail the environmental impact and the nutritional quality of the diets of more than 9,000 people living (and thus shopping for food and beverages) in Australia [1]. Its conclusions are intriguing for two reasons. First, in a country where water scarcity is of considerable concern, consuming dairy has relatively little water-scarcity impact compared with the impacts of other kinds of food. Indeed, from both a nutritional-quality perspective and an environmentally conscious one, the study’s authors propose raising Australians’ dairy consumption from 1.46 to 2.5 servings per day. Second, the analysis shows that processed snacks have surprisingly large water-scarcity footprints in addition to their better-known negative health impacts. It is these products that should be the common enemy of advocates of healthy eating and environmental protection.

The analysis, which was conducted by Bradley G. Ridoutt and colleagues at Australia’s national science agency—the Commonwealth Scientific and Industrial Research Organisation (CSIRO)—used data from the most recent Australian Health Survey. This survey is conducted by the Australian Bureau of Statistics, and, unlike many dietary surveys, asks participants to recall the food and beverages that they consumed only during the previous 24 hours—as opposed to evaluating their diets in general, which may lead to greater inaccuracies. The survey is immensely detailed, with 5,645 food types classified into 500 minor food groups, 132 sub-major food groups, and 24 major groups. When a participant reports eating apple pie, for example, the ingredients are listed, and apple, sugar, flour and shortening are counted in different food categories.

Ridoutt and his colleagues took these data for more than 9,000 Australians and carefully adjusted it based on how people tend to misremember even what they consumed very recently. Then they worked out, food by food, by the amount swallowed, both the water-scarcity footprint and the nutritional value of every participant’s diet. The water scarcity footprint was calculated using three methods, which turned out to produce results that were closely correlated. The research team then compared the diets of different sectors of Australian society, and considered how the nutritional quality of Australians’ diets is related to their contribution to the country’s water scarcity.

On average, each Australian’s food and beverage consumption requires about 365 liters of water every day. That average conceals considerable variation, however. Unsurprisingly, the water-scarcity footprint was larger for men’s diets than for women’s diets, as men, being typically larger than women, tend to eat and drink more. But it was also larger for Australians between the ages of 51 and 70 years of age than for those aged 19 to 50 (though the lowest water-scarcity impact group was those over 71 years of age). Among the food habits that contributed to these differences, what the authors term “discretionary foods”—including alcohol, and sugary, salty, fatty snacks—made the biggest difference. Previous research by members of the same research team demonstrated that these foods are responsible for about 30% of dietary greenhouse gas emissions in Australia [2]. This study adds that they contribute 25% of dietary water-scarcity impacts.

Self-evidently, no dietician is likely to encourage people to swallow more of these kinds of foods and more alcohol. However, the category of foods that contributed the second-most to water scarcity was fruit and vegetables, making the balance of considerations—environmental and nutritional—less straightforward for public policymakers. Collectively, Australians’ consumption of fruit and vegetables, although less than experts would recommend for health, contributed almost as much to water scarcity as Australians’ consumption of discretionary foods. The dairy—and in this study, the meat—components of average diets generated far less water-scarcity impact.

So how should both concerns—worries about droughts and nutrition—be balanced? Ridoutt and his colleagues calculate that if the country were to switch its dietary habits to those recommended by government health experts, the water scarcity footprint of each Australian would rise from 365 to 445 liters of water per day—worsening Australia’s water-management problem. But compromise is possible. The researchers identify a group of participants whom they consider to have a high-quality diet from a nutritional perspective, as well as a low water-scarcity diet.

This group of people eats more fruit and vegetables and more fresh meat and dairy than the average Australian but very little in the way of discretionary food and beverages. They might have a bit of honey on their toast in the morning, a modest square of cake at teatime, and just the one small glass of wine with dinner. They also consume 1.7 times the amount of dairy as the average Australian, which, as it happens, is exactly in line with the ideal diet that nutritionists would recommend. This is possible because dairy has a mediocre impact on water scarcity in Australia. Overall, this diet implies a water-scarcity footprint of 320 liters of water per day, and is much healthier than the average Australian diet.

The study by Ridoutt and his team serves as a demonstration of how dietary advice might be reconsidered in an age where the environmental degradation that results from meeting the nutritional needs of a large and rapidly growing global population is ever more salient. Even though the calculations involved in this study were complex, in some ways the Australian case is simpler than most because more than 90% of the food consumed in the country is also grown there, so supply chains are well documented. Numbers such as those calculated in this paper may help to modify dietary advice, yet, as the authors argue, one of the key insights of their environmental calculations is that major gains can be made in changing the way in which different food products are produced. The same crop grown in a different ecosystem, in greenhouses versus open fields, can have radically different water consumption demands. Those insights, too, should guide public policy.