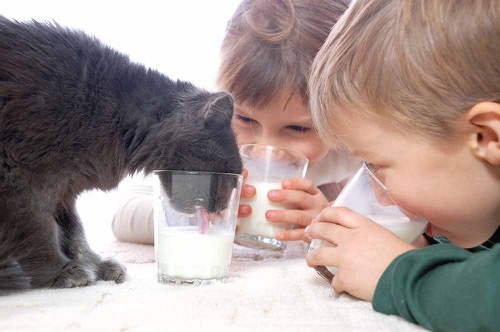 When people take drugs to treat depression or stress, they are trying to change the levels of certain chemicals in the brain through which nerve cells communicate. Serotonin is probably the most important as well as the most famous of these chemicals. Recently, evidence has emerged that people have different versions of the gene for the protein that moves serotonin into brain cells, and correspondingly different propensities for depression. More optimistically, evidence has also emerged that eating certain dairy products—as well as exercising and spending time in sunlight—can raise serotonin levels and thus potentially reduce or act preventatively against depression.

Various milk components appear to ward off the blues. Vitamin D, for example, lessens seasonal affective disorder. This vitamin is made in the body when skin is exposed to sunlight or, more specifically, when ultraviolet B radiation breaks down the substance, 7-dehydrocholesterol. In summer, there is sufficient sunshine to make this happen in such quantities that the hormone resulting from 7-dehydrocholesterol break down affects the brain’s dorsal raphe nucleus, and consequently keeps a forebrain network called the ascending serotonergic system in the mode of making you feel happy. In winter, the lower sunlight levels mean that this pathway is less active, leading some people to feel depressed. But eating vitamin D, mainly as fish oils and fatty fish, or drinking vitamin D-supplemented milk and orange juice, can help1.

Milk also contains fragments of protein that activate the same biochemical receptors in the nervous system as do morphine and opiate drugs. These fragments are present in relatively high levels in all sorts of well-known types of cheese. The best studied are the beta-casomorphins, which have surprisingly strong effects. Just five years ago, the conventional wisdom went that these fragments are entirely ravished by enzymes in the adult—but not the infant—gut and thus fail to make the journey across the intestinal wall into the body.

However, a 2009 study of cheese by Sienkiewicz-Szlapka et al. revealed that this line of reasoning is probably nonsense2. If beta-casomorphins do find their way into the cheese-eater’s circulation, as this team’s work suggests, then it is quite likely that they also make it into parts of the brain3. Another key piece of research was contributed in 2013 by a group of Irish researchers. They demonstrated that components of milk really do activate serotonin receptors in cells, although those cells were in test tubes in a laboratory (as opposed to being inside a brain)4. Together, these various studies set up a plausible mechanism by which a long evening with a cheese fondue might, in a very mild way, act rather like hooking yourself up to a dilute morphine drip.

Does this add up to medically relevant benefits? Potentially, although the different avenues of research so far do not connect to each other seamlessly. Dutch scientists are, for example, probing whether another protein in milk called alpha-lactalbumin might help people recover cognitive performance. There are two recent studies of note here: one in which alpha-lactalbumin supplements were used to try to raise the decreased cognitive function of people who had come out of a period of depression; the second study attempted to improve the cognitive performance of particularly stress-prone students. The link between alpha-lactalbumin and serotonin levels is simple. Alpha-lactalbumin is rich in tryptophan, another protein that is a precursor of serotonin. Thus, raising alpha-lactalbumin levels raises tryptophan levels, and therefore those of serotonin.

In the second study, Rob Markus of the University of Maastricht and colleagues6 formally measured the “neuroticism” of university students, defined as how disposed the students were to seeing events as alarming and to experiencing aversive emotional states. They then tested the memories of students among the most and the least neurotic. This testing happened before and after the students either consumed normal chocolate milk as part of their diet, or chocolate milk doped with alpha-lactalbumin. Only the students who were in the most neurotic group and who also consumed alpha-lactalbumin-rich milk saw significant improvement on the memory test.

The team’s explanation for this finding was that the most stress-vulnerable students probably had depleted brain serotonin, and, under chronic stress, their brains were more sensitive to the molecule. Therefore, when they ate large amounts of tryptophan, this group experienced the largest changes.

The number of human subjects tested in these Dutch experiments was small—too small to justify any broad recommendations based on the results. But the results in each study are worth following up. Over time, the lab work into serotonin’s effects and the foodstuffs that can affect serotonin levels is likely to correspond ever more closely to those measured in human trials as opposed to cells in test tubes. The future of this field, in short, looks rather happy.

6. Markus CR, Olivier B, de Haan EH (2002). Whey protein rich in alpha-lactalbumin increases the ratio of plasma tryptophan to the sum of the other large neutral amino acids and improves cognitive performance in stress-vulnerable subjects. Am J Clin Nutr 75:1051-1056.