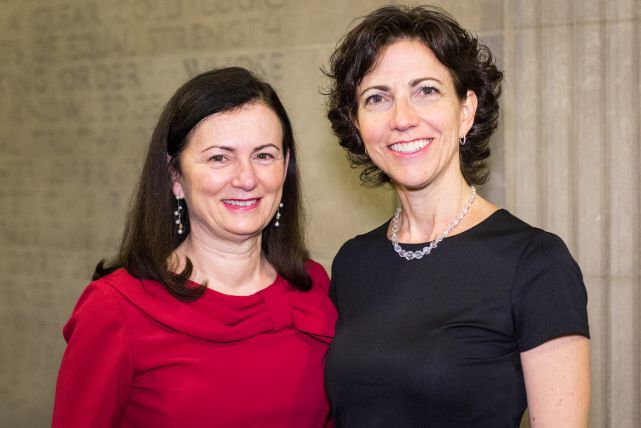 Sharon Unger is a neonatologist who conducts trials on the developmental outcomes of preterm infants who are fed donor milk. She works closely with Debbie O’Connor, a dietitian scientist also based in Toronto. Together they chair the Advisory Committee for the Rogers Hixon Ontario Human Milk Bank and are the principle investigators of the OptiMoM and MaxiMoM Programs (Optimizing and Maximizing Mother’s Milk). Here Sharon talks to SPLASH! about those studies.

How is donor milk processed?

The process begins with screening potential milk donors in a similar way to how blood donors are screened. There’s an interview, a consent process, and a blood analysis. Once approved, a milk donor—we call them “donor mothers”—collects her milk until she has about five liters to give away. Her milk is then taken to a milk bank for processing. There, milk from four different mothers is pooled, before it is pasteurized and eventually bottled. The pooling makes for a more average composition of donor milk. Most milk banks pasteurize by heating milk to 62.5ºC for 30 minutes—a technique called Holder pasteurization. Before the milk is bottled, it’s cultured to check no germs survived pasteurization.

What motivated you to start running trials on donor milk?

In the intensive care unit, 70% of preterm babies don’t have a full supply of their mother’s milk. Until just a few years ago, we used to make morning rounds and would ask the moms, “Do you have any milk yet?” If they said no, we’d leave the babies with nothing to eat for up to 96 hours because we didn’t want to give them a bovine milk-based formula (it’s known to increase the risk of severe inflammation of the gut, necrotizing enterocolitis). That was stressful for everybody—for the baby, the staff, and particularly stressful for the mothers. With every cell [in their bodies] they want to provide nourishment for their babies, but often mothers feel too much pressure and it becomes a vicious cycle. So, we needed a better alternative to bovine milk-based formula. But to set up a donor bank we needed evidence. In Canada’s socialized medicine system, you have to prove that something’s of benefit before you can ask for the money.

So, there was no milk bank in Ontario until a few years ago?

Until 2013, no. There had been one here for a long time previously. It shut down in 1985 when we learned that HIV could be carried in human milk. All the milk banks in Canada shut down then except for the one in Vancouver. That meant almost all of the evidence for the benefits of milk banks within the Canadian health system was 30 years old.

Your first big donor-milk study was GTA-DoMINO. What did it find?

DoMINO stands for Donor Milk for Improved Neurodevelopmental Outcomes. We randomized very-low-birth weight babies—those weighing less than 1,500 g at birth—to receive either donor milk or a bovine milk-based formula if their mothers were unable to produce enough milk. Our primary outcome was the neurodevelopment of these infants at 18 months after their due date. We tested their cognitive, language and motor
development.

We did what is called an “intention-to-treat analysis”—a kind of statistical approach—that didn’t find an effect on the primary outcome. But this way of looking at the data includes all of the infants in the trial whether they required a supplement to mother’s milk or not. Of course, the infants whose mothers did produce sufficient milk, which was 30% of the total, had better cognitive development when they were analyzed separately.

How have your subsequent trials built on these results?

We’ve been very fortunate to receive funding to invite the same children back when they reach five years old—to see if receiving a bovine milk-based formula as a preterm infant has long-term developmental impacts. These children are currently turning five, so we don’t have all the results yet. It’s important because you can imagine that doing cognitive tests on 18-month old infants can be quite challenging, especially if the infant has separation anxiety. In the OptiMoM trial, we’re now testing cognitive development at age five in really detailed ways, including using an MRI scanner.

We also have a trial testing the developmental effects of different donor milk fortifiers. The growth of a baby is at its most rapid in the third trimester of pregnancy. This is what the very-low-birth weight infants have missed out on. So they need a much higher dose of protein and other nutrients than infants born at term. There’s one product on the market now where the fortifier is made from donor milk. So we’re comparing the outcomes associated with receiving donor milk plus this fortifier with donor milk plus a bovine milk fortifier.

Together, these trials mean that we have a really large biobank of all kinds of samples—mother’s milk, donor milk, stool samples. Now we’re adding to it buccal swab samples from the five-year olds.

What are the main challenges in running trials with preterm infants?

These trials are tough to do. It’s particularly tough to keep them blinded because every nurse will guess what a baby is being fed. So, we have had diet technicians prepare our feeds away from the intensive care unit, and put the feeds into an amber-colored syringe with all of the tubing attached. This way the nurses can’t see or smell the feed.

Trials on preterm infants usually involve a very small number of participants. How many infants have been enrolled in these trials?

We had 363 preterm infants in the GTA-DoMINO trial and have followed more than 90% of those who survived until they reached two years old. We’re hoping that we’ll see at least half of those back as five-year olds. And then in the fortifier trial, we had 127 preterm infants.

In an ideal world, for how long would you like to follow the GTA-DoMINO participants? Some studies that look for IQ differences in mother’s milk-fed and formula-fed term infants have run until the participants were in their 20s or 30s.

Right now, we only have funding for the study on five-year olds. It would be great to continue for longer, but I think that’s going to depend on whether we see developmental differences at five years.

In the lab of my Co-PI on these projects, Debbie O’Connor, we are looking at different non-thermal methods like ultraviolet light and high pressure to pasteurize donor milk.

On that matter, in the future, it would be interesting to compare donor milk that is pasteurized differently, given all the immune proteins and digestive proteins that can be damaged by Holder pasteurization. I think there will be more options for donor milk and human milk-based fortifiers in the years to come, which might give us different processing methods to compare. There’s going to be a lot of work on how to best fortify mother’s milk and donor milk for preterm infants. It’s a whole up-and-coming area of research.