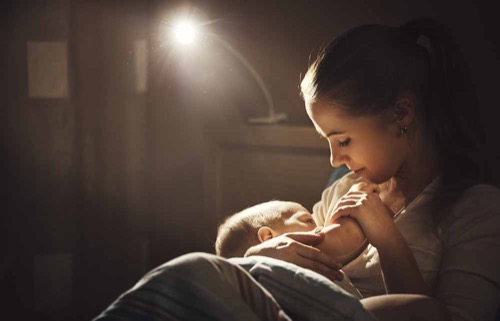 Human beings have internal clocks. Locked in a room with no source of daylight nor regularly scheduled stimulation, our bodies cycle automatically through periods of slightly longer than 24 hours, sleeping and waking more or less as if the sun were rising and falling over a horizon that we could see [1]. But we are not born this way. Instead, infants develop body clocks gradually. Researchers investigating this aspect of development have recently wondered how much human milk contributes to the process, in the knowledge that its levels of nutrients and hormones vary over the course of the day.

In a recent issue of the journal Pediatric Research, Jennifer Hahn-Holbrook, an assistant professor at the University of California, Merced, and her colleagues, point out that no published research has measured how daily variation in levels of cortisol circulating in the blood develops in infants who were breastfed, compared with those who received formula [2]. Cortisol is a hormone involved in regulating metabolism, and is generally high in the morning, when your body senses that it is time to wake up.

Indeed, studies into the potential benefits of breastfeeding over formula feeding often fail to note whether infants were fed at the breast, or with milk that was pumped and stored, potentially during a different portion of the day. And yet, as the authors of the review propose, infant body clocks may develop more rapidly among infants who consume milk that is laced with hormones appropriate to time of day that they feed. Hahn-Holbrook and her colleagues expect that these infants’ body clock development outpaces both formula-fed infants and infants who consume breast milk containing confused circadian signals.

Human milk changes over the course of the day in its levels of many different constituents. Concentrations of amino acids alter such that more activity-promoting amino acids are found in day milk than in night milk [2]. One example is tyrosine, an amino acid that is converted in some brain cells to a precursor of epinephrine and of the neurotransmitter, norepinephrine. Levels of some nucleotides also change. At night, infants fed at the breast receive more 5′AMP and 5’GMP than when they feed during the day. These nucleotides are thought to prompt the release of melatonin—a hormone that promotes sleep—and of gamma-aminobutyric acid (GABA), which does the same [3]. But it is two hormones in milk that are suspected of having the greatest influence in regulating the infant body clock, and in aiding its development: the aforementioned melatonin, and cortisol. This is where the bulk of the research in this burgeoning field has been focused.

Cortisol shows dramatic swings in its presence in human milk. One study, based on milk produced by 23 women, found more than three times the levels of cortisol in milk pumped between 4 a.m. and 10 a.m., compared with milk that the same women pumped between 4 p.m. and 10 p.m. [4]. Without research to actually test the hypothesis, this kind of finding is highly suggestive of impacts on infant behavior and development. This is because cortisol in the diet is known to easily pass through the intestinal wall into the blood and on, through the blood-brain barrier, into the brain. And because dosing rats in a laboratory with a synthetic version of cortisol, called dexamethasone, has been shown to reset the clock-following chemistry of their peripheral tissues. Specifically, in a series of experiments, Ueli Schibler and a team based at the University of Geneva, in Switzerland, showed that giving lab rats dexamethasone at times of day when their natural levels of cortisol were not high, changed the circadian gene expression patterns of liver, kidney and heart cells, effectively dialling these cells’ internal clock hands backwards or forwards by several hours [5].

As with cortisol, melatonin can cross through the walls of the intestine and make its way into many organs, including the brain. There is a study that directly compared the daily variation in a metabolite of melatonin in breastfed and formula-fed infants. It found, as anticipated, that the urine of breastfed infants contained more regular night-time increases in this metabolite—a biochemical trace of more rapidly developing sleep patterns in these infants [6]. Breastfed infants are known to have less fragmented sleep and higher sleep efficiency than formula-fed infants [7, 8], and this may be an important reason why.

As Hahn-Holbrook and her colleagues argue in their review of the field, this is an area of science ripe for policy-relevant research. Many of these experts’ suspicions about how human milk’s daily biochemical variations are likely to affect infant body clock development, if confirmed, would suggest basic and rather easy interventions. For example, labeling pumped milk with the approximate period of the day—night, morning, afternoon—and trying to match the pumping period to the feeding period, would be an easy way to avoid mixing the biochemical signals of alertness and sleepiness that human milk is thought to communicate to an infant body. For any parent who yearns for their infant to start sleeping through the night, this could help. But as Hahn-Holbrook’s review points out, these potential effects are off-the-radar of most of the medical profession.