Do the math – cow burps are profound! 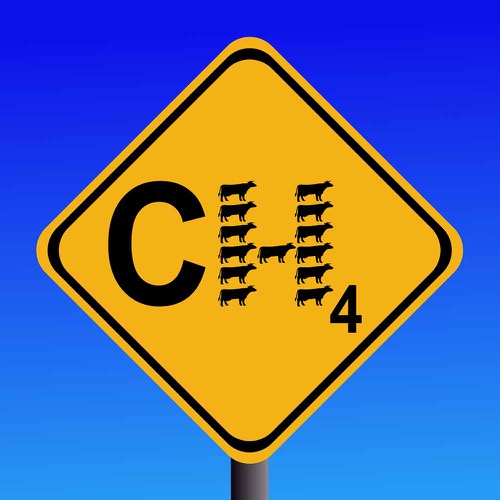 In some societies, burping in public is considered very bad manners, often evoking a silent, disapproving frown or, if at home, a strong verbal reprimand. Sometimes burping alone gives immense personal satisfaction – a job well done. In more enlightened societies, a guttural burp is the ultimate complement, a mark of appreciation for excellent food. Human burps are, in the grand scheme, socially important, but in reality quite innocuous.

Burping by cows, or to use the more descriptive technical term, eructation (or belching), is a natural sign of good health. However, there is a dark side to cow belching – methane, a potent greenhouse gas.

To put this into perspective, the world’s ruminant livestock collectively produce about 100 million tonnes of methane each year, mostly through belching. Non-ruminant species, including people, also emit methane, but only very small amounts in comparison. Hence, cow burps are big contributors to climate change, and they are now at the front line of scientific investigations and government policy.

Efficient management of methane emissions from livestock populations and indicators of the success of intervention programs critically rely on the collection of data, but there is a problem. How do you accurately and cost effectively measure methane emitted in burps by commercial populations of livestock?

Two recent publications by Garnsworthy and colleagues1 have taken the first practical steps to address this measurement issue in dairy cows. Measurement is all-important. Much heated debate, dare I say hot air, in this politically charged arena occurs in the absence of good comprehensive data sets.

Why do ruminants produce methane?

Methane is a gas produced by specific groups of micro-organisms (largely belonging to the Archaea group) in the rumen of the cow and related species. It is a natural by-product of the fermentation process converting ingested plant material, cellulose, into small molecules that fuel animal growth, milk production, and maintenance of life.

There is also a large amount of energy trapped within methane not used by the cow, and therefore methane emission represents a major energy inefficiency of rumen fermentation. It is estimated the energy associated with methane emission from one cow in one year could power a six-cylinder car for 1000 km. Methane is an energy source not being converted into milk or meat.

Methane is a greenhouse gas with a global warming potential about 25 fold more powerful than carbon dioxide. A single cow produces between 80 and 120 kg of methane each year. This is equivalent in impact to the carbon dioxide emission from a small car over one year. Thus, the world’s approximate two to three billion ruminant livestock collectively emit very large quantities of methane. Climate scientists conclude this methane is a significant contributor to climate change. About 18% of all greenhouse gas emissions arising from the actions of humans are thought to be due to livestock. Under the terms of the 1997 Kyoto protocol, countries classed as ‘Annex 1’ are required to submit annual inventories of greenhouse gas emissions and to decrease total emissions by 5.2% of 1990 values before 2012. Measurement of methane is the key to these reports.

It’s technically relatively easy to measure carbon dioxide emissions from cars and factories. Measuring methane emission from cows is much more difficult. Garnsworthy and colleagues have identified the desirable characteristics of an ideal methane measurement. It must be relevant to commercial production systems, inexpensive, easy to implement, accurate, and reproducible and applicable to monitoring individuals within a herd. This is a tall order.

Fundamentally, there are three techniques. The gold standard is the respiration chamber where the quantity and composition of all gases emitted by a single cow are accurately measured in a sealed chamber over a period of two to three days. Unfortunately, this is a very artificial environment for the cow and hence the data may not reflect reality in a herd on pasture. The major limitations of this technique are its expense and impracticality for commercial operations such as a dairy herd.

The second method uses canisters attached around the necks of cows. These continuously sample expired breath, which is then analysed for methane content. The canisters may interfere with cow feeding behaviour. Moreover, the technique also requires the introduction of a chemical bolus into the rumen and considerable animal handling; both interfere with cow behaviour. This method is impractical and likely unacceptable for use within commercial herds.

The third method, and the one exploited by Garnsworthy and colleagues, measures methane emission during the milking of individual cows using methane air analysers installed in the feeding troughs of automatic milking stations. This technique does not disturb cow behaviour or feeding, and it produces considerable data that very clearly demonstrates repetitive belching during milking and feeding. Importantly, the technique was validated by the respiration chamber technique and was shown to be a good indicator of total daily methane emission. The technique is reliable, inexpensive, and potentially easily implemented in a commercial operation. These factors allow collection of considerable data from a large number of animals, thereby increasing the statistical robustness of the data.

Modifying methane emission from the cow

Garnsworthy and colleagues concluded there was considerable individual variability in methane emissions from cows on similar rations. This suggests there may be scope for genetic selection of animals with lower methane emission per litre of milk produced. Recent technological advances in genetics may allow this possibility to become reality in the future.

The availability of good methane measurement technology enables experiments to be performed that optimise feed, animal management, and genetics to minimise methane emissions whilst maintaining milk production. One obvious strategy is to increase fermentation efficiency in the rumen, which has the capacity to both decrease methane emission and make available more energy for milk production. Is this realistic, or just a scientific daydream?

Retrospective calculations made by Chase2 (Cornell University) indicate there was a remarkable 40% reduction in methane emission per litre of milk produced in the USA from 1944 to 2007. In the same time period, the number of dairy cows decreased by 35% and amazingly, total milk production increased to 159%. Many factors contributed to these figures, but clearly history indicates further improvements in methane emissions from dairy cattle are feasible.

The livestock industry produces milk, meat, fibre, and hides to the world’s seven billion people. However, the simple mathematics of multiplying total livestock number by the methane emitted per animal generates a dauntingly large quantity of total emitted methane. Reducing methane emission from livestock is essential to minimise its impact on climate change.

There is realistic opportunity we can achieve this goal. Perhaps the solution is in the words of Dolly Parton – We cannot direct the wind, but we can adjust the sails.