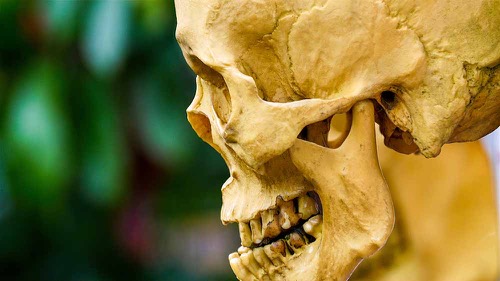 Six-thousand-year-old tartar is a dental hygienist’s nightmare but an archaeologist’s dream. That’s because the same yellow, cement-like deposits that have to be manually scraped off during a dental visit are also dietary time capsules [1]. Like an insect preserved in amber, food particles from a lifetime of meals get trapped in tartar’s mineral matrix and become part of the fossil record. Rather than infer what past populations might have eaten, researchers can analyze ancient plaque and say what one particular individual actually ate.

The ability to identify specific food proteins in tartar (or dental calculus) has been a game-changer for scientists reconstructing the origins of dairying. Consumption of animal milk represents a major nutritional and cultural transition in human history. Milk was an important source of protein, fat, and essential vitamins and minerals, as well as a potential weaning food for infants and a critical source of hydration for humans living in arid environments [2, 3]. Multiple lines of evidence suggest that humans have included milk or milk-derived foods such as cheese and yogurt in their diet for at least 8,500 years [2, 3]. But several key questions about the origins and practice of dairying remain unanswered, including the anthropological chicken and egg: which came first, dairy consumption or the genetic variant that allowed for dairy consumption into adulthood? Did populations start consuming dairy, thereby driving positive selection for lactase persistence (LP), or were there already low frequencies of the LP gene variant present during the transition to agriculture that encouraged dairy consumption [1]?

Hoping to solve this evolutionary riddle, a new study [2] led by researchers at the Max Planck Institute for the Science of Human History linked diet with genetics by analyzing ancient proteins in dental calculus from 41 prehistoric individuals from across Sudan and Kenya, many of which also provided ancient genetic information (aDNA) on LP. This region has been called the cradle of humanity for human origins and it could potentially be the same for dairy culture; it has the earliest archaeological evidence in Africa for pastoralism, and three of the five known LP variants are believed to have originated in either northeastern or eastern Africa [2].

Despite their teeth demonstrating they were dairy consumers, none of the individuals that had complementary aDNA data had any known LP variants [2]. This finding supports data from other regions of the world that suggest dairy consumption came first, preceding natural selection for LP by perhaps thousands of years [2]. Like modern-day populations without genetic adaptations, these early dairy consumers may have benefited from gut microflora or fermentation practices that help break down at least some of the lactose and limit digestive issues associated with lactose intolerance. Researchers speculate that selection for LP in East Africa may have increased when populations increased their dependence on dairy consumption, perhaps during periods of drought [2]. Thanks to the lack of toothbrushes and dentists in the Neolithic (and some pretty nifty scientific analyses in the present day), it is possible that this speculation could soon be validated.