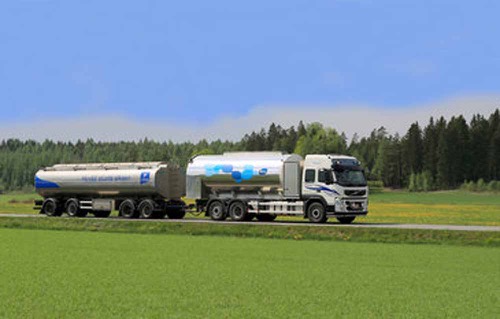 Delivering milk to the table of households across the world is a triumph of logistics that has developed over many decades. In some countries, such as India, traditional approaches still predominate, albeit with steady changes. For the others, it engages a sophisticated organizational infrastructure on a regional, national or even international scale.

In 2012, 620 billion liters of milk were produced worldwide. This continues to grow incrementally with increasing demand. Domestic markets consume most of this, leaving about 5-7% available for trade. Dairy farmers and farm systems have boosted productivity because they’ve become more efficient in their production. For example, larger herd sizes, selective breeding programs, and improved cow nutrition have helped meet the increased demand while lowering production inputs. The proportion consumed as drinking milk varies between countries, but the challenge of delivering fresh milk to the consumer is ubiquitous. Drinking milk arrives on the supermarket shelves in enormous quantities, usually within 24 hours from the cow being milked. The certainty of supply and nutritional contribution of milk provides a staple for many households.

Essential to both the farmer, as well as the entire dairy system, is the reliability of milk collection. On most farms, milking occurs twice daily and the collected milk is then stored on the farm in large refrigerated vats. Milking times are coordinated with collection times, hence the early morning rising times that we associate with dairy farming. Each day, an armada of milk-collection tankers owned or commissioned by farm cooperatives or dairy companies finds its way to every farm to collect the stored milk and deliver it to the processing plants. One of the recent developments is an increasing uptake of automated milking systems. This has had a major impact on the lives of farmers and cows. The most notable change is to milking times and frequencies, and although this initially raised concerns over timely on-farm milking relative to collection, it has not proved to be a problem. So, the farmers get to enjoy a reasonable night of sleep, and the cows don’t seem to mind what time of the day or night they wander up to the dairy for milking.

The packaged milk that arrives on supermarket shelves is largely unchanged from the milk collected from the farm, except for two processes: milk homogenization and anti-microbial treatment. We generally know anti-microbial treatments as pasteurization (named for Louis Pasteur, who pioneered the process). The procedures used for pasteurization vary, but traditionally involve heating the milk to 63°C (145°F) for 30 minutes. This process was introduced to prevent the milk from spoiling due to microbial contaminants, as well as to prevent transferring potential pathogenic microorganisms to consumers. This process lengthens the shelf life of milk to approximately 2 weeks, if refrigerated. Nowadays, the same effect is achieved via a short period of higher temperature treatment, 73°C (163.4°F) for 15 seconds. Prior to packaging, heat is applied to the milk as it passes through stainless steel piping in the processing plant, which ensures even temperature distribution. Another alternative treatment that has grown in popularity uses a very short, very high temperature. It requires a temperature above 135°C (275°F) for about 2 seconds. This process, known as ultra high temperature treatment (UHT), achieves a greater level of microbial ablation and effectively sterilizes the milk. UHT treatment increases milk’s shelf life for extended periods, approximately nine months. This has the added advantage of not requiring refrigeration, and is well suited for transporting milk over long distances, and supplying milk to remote locations.

Homogenization, as the name suggests, is a process that produces a homogeneous or standardized milk. Many may remember un-homogenized milk, which was previously the common form of drinking milk. The milk fat, or cream layer, would rise to the top and leave more watery milk below. Family members would favor the cream, or not, but in most instances the milk bottle would need to be given a thorough shake to mix the layers before opening. This was a manual process of homogenization, which is now automated and completed at the plant. This is achieved by passing the milk through a small valve or bore under pressure, which mixes the milk components and disperses the fat content of the milk, providing a uniform appearance, taste and texture. The milk is then packaged in cartons or bottles, not the expensive glass bottles of the past, but biodegradable cardboard or plastic recyclables.

Once the processing is complete, the milk is loaded onto delivery trucks that travel to the myriad of outlets: from the supermarkets that sell in large volumes, to the corner store or coffee shop that provides for everyday needs. The speed, efficiency, coordination, and regularity of this incredibly complex logistical achievement are the backbone of a successful dairy industry. Given the complexity of the infrastructure and the quality of product, drinking milk is remarkably, some say ridiculously, low cost.