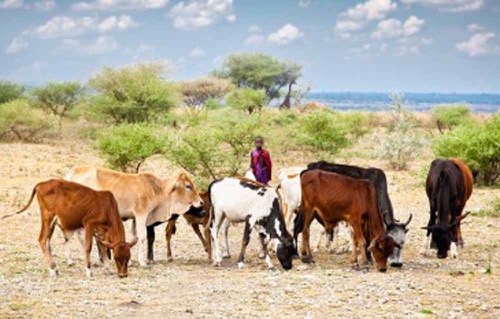 Among the earliest human populations to drink milk were pastoralists from East Africa. Over 3,000 years ago, they evolved the genetic mutations associated with lactose tolerance (1). Milk has remained integral to pastoralist livelihoods, providing between 50 to 90% of their daily caloric intake (2). Over the last several decades, however, environmental changes and political pressures have forced many populations, such as the Samburu of Kenya, to abandon their nomadic herding lifestyle for one focused more on agriculture. In addition to becoming more sedentary, these populations have decreased their livestock holdings, and with that, their milk consumption. What does this dramatic shift in livelihood mean for the health of a population with such a long history of milk dependence?

This important question is addressed by a new study that combines longitudinal data on diet and subsistence practices with measures of weight and height in children among the Samburu population (2). The results suggest that milk may play a critical role in preventing nutritional deficiencies and improving child health outcomes.

A population in transition

The Samburu are a population of roughly 200,000 people living in North Central Kenya. They have a long history of herding livestock, which includes indigenous breeds of cattle, sheep, and goats (3). Agricultural practices were introduced during the 1960s and since that time cultivation of crops (primarily maize and beans) has been integrated to varying degrees into the livelihoods of Samburu people. Since the 1980s, there also has been an increase in the reliance on wage labor for family income. While livestock are still considered central to their lifestyle, the Samburu, like many other pastoralist populations, are transitioning toward a more diversified livelihood strategy (2).

Study authors Iannotti and Lesorogal hypothesized that departures from the pastoralist mode of subsistence would be associated with reductions in milk consumption, which in turn would influence childhood nutrition and health (2). To test their hypothesis, they administered comprehensive surveys to 158 households at three time points over a 10-year period (2000, 2005, and 2010). Survey questions were designed to give the authors a clear picture of what each household was consuming and how each household made a living. For example, 24-hour dietary recalls were administered to each household and used to determine how well individual family members were meeting nutritional requirements. Because of the specific interest in milk and childhood growth, detailed questions also were
included that allowed the authors to estimate each child’s milk consumption — down to the milliliter!

Unlike the dietary data, growth data (height and weight) were not longitudinal, collected at just one time point from the same children that provided 24-hour recall information on milk consumption (218 children from 55 households). As a result, the study did not measure how each individual child grew over a set period of time. Rather, data on children’s height and weight were compared to reference data (matched for age and sex) from the World Health Organization (WHO). Specifically, researchers wanted to determine what proportion of Samburu children could be characterized by underweight (low weight for age), wasting (low weight for height), and stunting (low height for age). Low is defined as being in the lowest 5th percentile, or more than two Z scores away from the mean, for weight and height by age, or weight by height.

All calories were not created equal

When all of the data are combined, a detailed picture emerges of where Samburu get their calories and nutrients from, and what this means for their overall health. Maize provided the majority of the calories (50-55%) across all time points in the study. In comparison, only 10% of their calories were from milk. Despite its small contribution to their caloric budget, milk was responsible for 20% of total dietary fat, 20% of protein, and more than 50% of micronutrient intake (e.g., calcium, vitamin A, B12,). From this, it is clear to see how even small differences in milk consumption could produce large differences in nutrition, particularly for growing children. Indeed, the study found that reduced milk consumption at the household level was associated with child undernutrition.

It may seem surprising then, that Iannotti and Lesorogal report individual child milk intake was not predictive of any child growth measures (2). Compared to WHO reference standards, the Samburu certainly face issues of stunting, underweight, and wasting (for Samburu < 5 years of age, the prevalence was 30.6%, 23.9%, and 8.6%, respectively)(2). But children with higher milk intakes were not taller, heavier, or heavier for their height than their Samburu peers. How can these results be reconciled with their findings of widespread child undernutrition?

Iannotti and Lesorogal suggest that height and weight may not be the most appropriate measurements to understand the effect of reduced milk consumption on child health. Linear growth and weight gain may be sustained simply through sufficient energy intake. While maize is lower in protein and fat than milk, and lacks many of milk’s micronutrients, it may provide sufficient calories for growth.

But not all calories are created equal. Although milk intake may not influence children’s height or weight, it may have profound impacts on numerous other health outcomes that are not as easily quantified at one study visit. Based on analysis of dietary recall information, Iannotti and Lesorogal propose that Samburu are at high risk for having inadequate intake of vitamin A, vitamin B12, folate, zinc, and calcium (2). Deficiencies in any of these nutrients can result in poor child development or health outcomes. For example, zinc deficiency can influence linear growth, but is also associated with impaired immune function and an increased risk of diarrhea and pneumonia (4).

The goal of this type of research project is to identify ways in which to improve child growth and overall health. Despite the lack of relationship between individual child milk intake amounts and height and weight measurements, there were numerous factors that were demonstrated to improve child (and adult) nutrition. Cattle ownership at the household level was associated with improved child growth measurements and milk consumption ensured adequate micronutrient nutrition. Therefore, policies that promote and support the maintenance of livestock and continued milk production among the Samburu have the potential to positively influence child nutritional status, and subsequently, population health of Samburu and other pastoralist groups in transition.