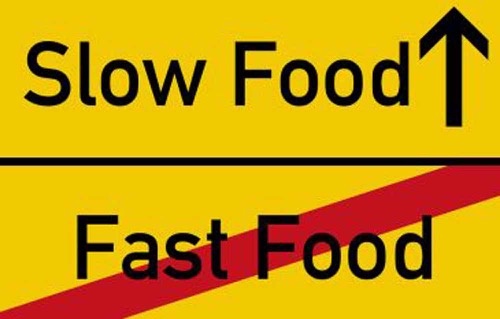 Foods traveling from the mouth to the intestines are a bit like drivers off to work on a four-lane interstate. Some foods get in the fast lane and are quickly digested, whereas others stay in the slow lane, taking longer to reach their final destination. Why some foods are speed demons and others Sunday drivers depends on the particular properties of the nutrients in the foods. For example, proteins take longer to break down in the stomach than do carbohydrates, and milk contains some of the slowest digesting proteins of all. What makes milk proteins such slow pokes?

Milk’s casein proteins actually go about making themselves more difficult to digest, forming small insoluble little balls, or curds, when they reach the stomach. Digestive enzymes have to work hard to break these curds apart, resulting in longer digestive times and slower release of the protein’s nutrition. These properties of milk caseins may have evolved to benefit mammalian infants, but slowed digestion offers the benefit of increased satiety to milk drinkers of all ages. Eating foods, like milk, that take the slow lane may mean eating less food overall.

Protein digestion: one brick at a time

Imagine that a protein is a skyscraper awaiting demolition. Although a wrecking ball and some explosives might be the quickest way to knock it down, doing so will damage the individual bricks used to construct the building. For proteins, the bricks are the amino acids the body needs to manufacture other proteins (e.g. muscle fibers, antibodies, hormones). Proteins, thus, must be broken down, brick by brick. (This can explain why proteins appear to have a more satiating effect than carbohydrates—they spend more time in the stomach than do carbohydrates, which require little processing by the stomach [1].)

Stomach acids help to unfold all the twists and turns of the amino acid chains, allowing digestive enzymes produced by the stomach’s wall to get to work breaking the peptide bonds apart. The easier it is to get to the individual amino acids, the quicker the protein can be processed. As such, proteins with less structural complexity have quicker digestive rates.

As proteins go, individual casein proteins from milk are fairly simple in their structure, lacking the high degree of coils, turns, and folds found in many other proteins [1,2]. In theory, they should quickly move through the stomach and transfer their amino acids to the bloodstream soon after ingestion. In practice, however, researchers have found the exact opposite.

Casein proteins in milk form small spheres, called micelles, with the hydrophilic (water-loving) portions of the protein on the outside of the sphere and the hydrophobic (water-fearing) portions on the inside. With hydrophilic structures on the outside, the micelles are soluble in water (or milk, which is mostly water) [1,2]. But when the micelles reach the stomach, “one of the most ingenious events in nature takes place” [2]. The digestive enzyme chymosin snips one of the bonds on the exterior protein (known as the kappa subunit), leaving only the hydrophobic subunits inside [1]. Without their protective layer, the now insoluble proteins form a curd. (If the term curd sounds a lot like curds and whey, there is a reason. In the process of making cheese, chymosin is also responsible for producing casein curds). Thus, by effectively turning a liquid into a solid, the enzyme makes casein proteins more difficult to digest.

Why would proteins that evolved to help nourish mammalian infants want to take longer to move through the gut and release their nutrients? There are obvious benefits to rapid digestion; nutrients and energy become available quickly after consumption, fueling immediate needs. Indeed, whey protein in milk is regarded as a “fast” protein [3] because its amino acids appear in the bloodstream relatively quickly after digestion (one of many reasons milk’s whey proteins are promoted as recovery foods after exercise). One of the disadvantages to fast delivery, however, is the need to replace those nutrients more frequently. Evolution solved this problem by equipping milk with complementary “slow” casein proteins. In addition to keeping the infant feeling satiated, slower digestion also means a slower release and subsequent absorption of casein’s amino acids. By having complete proteins that take both the slow and fast lane, milk provides mammalian infants with a nearly consistent supply of amino acids needed for their growth and development.

Filling up on cow’s milk

When a human adult drinks a glass of cow’s milk, chymosin acts the same way it does in an infant. Curds are produced, and these take longer to break down into individual amino acids. So, does this mean that casein proteins keep adults feeling full for a longer period of time than other proteins, such as whey? Surprisingly, there is not a consensus on the satiating effects of casein from the nutritional research [1].

A 2013 review of clinical trials on the effects of casein, whey, and other dietary proteins on appetite found that, although several studies supported the hypothesis that casein would be more satiating than whey, many actually found the opposite [1]. One reason for these confounding findings was the time period used to assess satiety. If satiety was measured within 1–2 hours after ingestion, whey seemed to be more effective, but if was measured 3+ hours after, casein kept the participants feeling more full [1]. With longer-term supplementation (days compared with hours), casein supplementation influenced overall food consumption. Participants supplemented with casein proteins consumed less total food at the end of the 7-day study period compared with those on a whey supplement [1].

Taken together, the studies reviewed by Benndtsen et al. [1] suggest positive effects of both whey and casein on appetite regulation. For those looking to reduce total food intake, the results of the longer-term studies are most encouraging. After all, weight loss or maintenance is not about how much food is consumed over the span of hours, but over weeks, months, and years. Milk is the only food to deliver both proteins simultaneously. If milk proteins can help reduce snacking in the short term and total food consumption in the long term, it could be an ideal food choice for those looking to reduce their total energy intake without compromising nutrition.

There is another “milk” that could provide a satiating protein for humans, but it might not be as appetizing as are dairy milk, cheese, and yogurt. In an elegant example of evolutionary convergence, mammalian infants are not the only animal offspring that utilize a slow-digesting protein. Pacific Beetle cockroach embryos are fed a milk-like substance from their mothers, and researchers recently reported that the proteins from this liquid transform into high-energy crystal structures in the embryo’s gut [4]. Although casein curds and roach milk crystals are not structurally similar, both effectively slow the release of the nutrients in the digestive tract of the offspring. Making milk a meal, rather than just a drink, appears to be an important evolutionary innovation for organisms as different as roaches, humans, and cows.