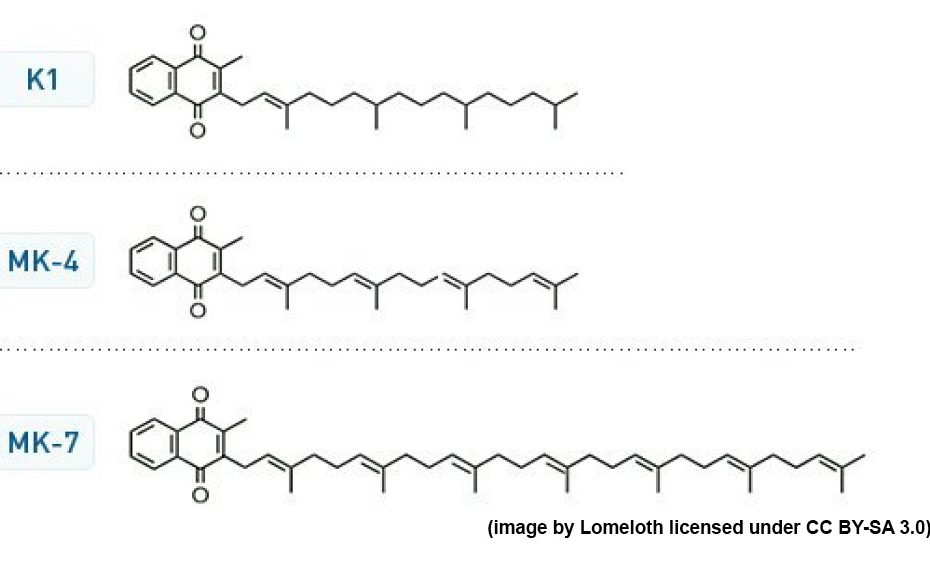 We all know vitamins are good for us. Some vitamins covet the stage of public awareness and rarely relinquish the limelight. If not consumed in sufficient quantities, they threaten dire health consequences for nonbelievers, children and small noisy dogs. Other vitamins, like vitamin K, are lost in the extrovert vitamin ABCD crowd and struggle to be heard. Their message, however, is equally profound for good health in humans. The paradox is that vitamin deficiency remains for many people a significant health and nutrition issue even in the presence of an abundance of food. Moreover, scientists continue to discover new biological roles of vitamins and new food sources containing different molecular forms of known vitamins, which together cause the regular revision of recommended daily intake levels.

Recent investigations that expanded the known biological roles and molecular forms of vitamin K are a case in point, with several studies highlighting additional potential benefits to people that may not be realized because of current dietary and nutrition practices [1-3]. A recent study published in Current Developments in Nutrition and authored by Fu and colleagues reported that full-fat dairy products contain multiple forms of a poorly characterized form of vitamin K—vitamin K2—and other studies reveal unexpected roles of this vitamin subtype in maintaining bone and cardiovascular health [1-3].

What is a Vitamin?

Scientists discovered most vitamins many decades ago when they noticed that some specific diets consumed routinely by humans and animals caused severe illnesses. The scientists reasoned that food components critical for good health were missing in these diets. They identified these food components (containing vitamins) and added them into the deficient diets, thereby preventing these illnesses. Subsequently, the molecular form of each vitamin was characterized. Vitamins are small organic molecules that cannot be synthesized by the body, and therefore, they must be obtained from external sources such as food or in the case of vitamin D, sunlight. Typically, very low quantities of vitamins are essential for key biochemical reactions that underpin normal cellular metabolism and function. The Nobel Committee recognized the immense importance of vitamins to human health with the award of a total of nine Nobel prizes between 1929 and 1964 [4].

Functions and Sources of Vitamin K

The Danish scientist Henrick Dam discovered vitamin K nearly 90 years ago [5]. He noticed that low-fat diets in chickens led to bleeding tendencies that could be prevented when normal levels of fat (containing vitamin K) were restored in the diet. Since then vitamin K has been recognized by nutritionists as a fat-soluble dietary component essential for normal blood coagulation in humans. Dam later discovered that the vitamin K required for blood clotting existed in two related molecular forms, phylloquinone (vitamin K1) and menaquinone (vitamin K2). Vitamin K1 is prevalent in leafy green vegetables and has been well characterized. Vitamin K2 is present in meat, eggs, and dairy products, but as Fu and colleagues [3] noted, historically vitamin K2 has been poorly studied in terms of its functions, multiple structures and abundance in different foods [1, 2]. Additional molecular versions of vitamin K2 are also produced by microbial fermentation, and these are found in some cheeses and nattō, a Japanese delicacy consisting of fermented soybeans.

Various national health and nutrition agencies throughout the world have produced dietary recommendations of Adequate Intakes of vitamin K. The term Adequate Intakes is used because there is insufficient information available to allow definition of a precise daily recommended intake for humans. Fu and colleagues indicated that menaquinones, the different molecular forms of vitamin K2, have not been systematically analyzed in US foods nor have menaquinones been included in (total) vitamin K intakes estimated in the US population [3].

Multiple Forms of Vitamin K are Present in Dairy Products

The study of Fu and colleagues has far-reaching consequences. First, the study will allow national health and nutrition agencies to take into account another rich food source of vitamin K and thereby potentially allow more precision in the recommended total Adequate Intakes level. Second, vitamin K2 is not only required for normal blood coagulation, but recently has also been implicated in bone and cardiovascular health [1, 2]. These studies demonstrated that vitamin K2 is associated with inhibition of arterial calcification, inhibition of arterial stiffening and the maintenance of calcium in bone. What is unknown is the level of dietary vitamin K2 that optimizes these biological functions. Third, the research of Fu and colleagues [3], in addition to a timely review written by Katarzyna Maresz from the International Science and Health Foundation in Krakow [1], highlights difficulties with popular modern diets. They noted the near absence of vitamin K2 from Western-style “junk” foods and its depletion in fat-free dairy foods. Thus, some people may not be getting sufficient vitamin K2 in their diets.

Calcium supplementation is widely used by elderly people to aid in the prevention of osteoporosis and its associated increased risk of bone fractures. However, a number of studies that were summarized by Maresz [1] conclude that there is an association with the use of calcium supplements and increased deposits of calcium in blood vessels, which may increase the risk of heart disease. Vitamin K2 deficiency may hinder removal of excess calcium from soft tissues and blood vessels and its deposition in bone. Thus, an adequate intake of vitamin K2 may be particularly important for the cardiovascular health of people taking calcium supplements.

There is still considerable additional research required to fully understand the roles of vitamin K in human health. The impacts of this vitamin on human health must also be assessed by health agencies using a background of current dietary trends.

Image note: MK4 and MK7 are forms of Vitamin K2