Dairy Pastoralism in Mongolia Began at Least 3,300 Years Ago 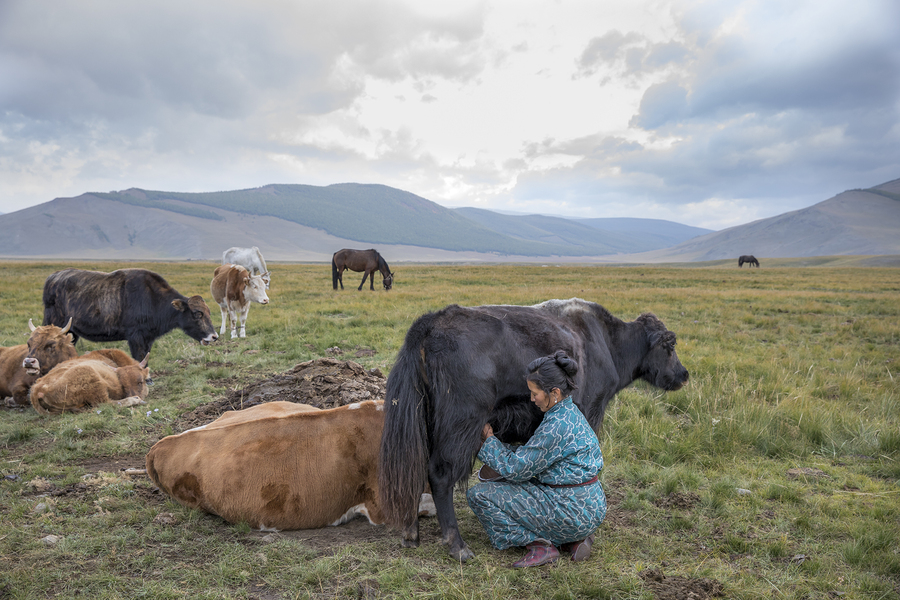 People have been migrating since the dawn of human existence. It’s in our nature to survive and that drove generations of ancient humans to walk to nearly all corners of the world. The history of human migration is inscribed in detail within the DNA code of modern-day people. It is a fantastic book to read, full of drama and intrigue. One chapter contains descriptions of an ancient population migration into Europe that resulted in major cultural changes. Scientists recently concluded that the Eurasian steppe was the ancient cradle for today’s European populations and it was also one of the primary origins of dairy pastoralism [1-5]. How and why ancient Eurasian populations migrated into Europe are being revealed by scientists using new technologies that trace massive ancient population migrations, changes in diets, and the movement of dairy pastoralism beginning about 4,500 years ago. The scientists along the way have answered one of the most debated questions of history. How did new ideas, especially knowledge of dairying, spread in ancient populations? Was it due to population migration and then replacement of indigenous populations or the adoption of new ideas taken from neighbors? The answer is both, but in different places.

Huge is the only word to describe the Eurasian steppe, which is a vast low rainfall grassland on rolling plains connecting present-day Hungary with Manchuria in north-eastern China. The steppe is swept by weather extremes. To the north, the steppe is bounded by winter’s cold and to the south lie semi-arid deserts. The steppe is divided into two massive regions by the Altai mountains lying at the junction of five modern-day countries; Russia, Kazakhstan, Mongolia, and China. The western steppe is about 4,000 km west to east and about 300–1,000 km north to south. Big! The eastern steppe is a mere 2,500 km west to east and 600–800 km north to south, but it includes all of Mongolia. The eastern steppe is higher, colder and more barren than the western steppe. About 7,000 years ago, nomadic human populations on the Eurasian steppe first began to herd sheep, goats, cows, yaks, and horses [6, 7]. This was the beginnings of subsistence dairy pastoralism. For reasons still not understood, about 4,500 years ago the western steppe herders (WSH) started to migrate westwards toward central Asia and northern Europe, taking their dairy animals with them [2-5]. The journey was slow and took many generations. Scientists conducting genetic analyses of samples from WSH graves concluded that during this massive migration, the WSH largely replaced indigenous populations and spread WSH culture into the heartlands of Europe. It was a profound and far-reaching transformation. Indeed, Haak and colleagues [3] concluded that the precursors of many modern Indo-European languages have their origins in this tidal wave of human migration. Today, the genetic footprints of the WSH remain in many northern European populations [2]. Several groups of scientists attributed the success of the WSH migration to mobile dairy pastoralism, which gave the WSH a distinct advantage over indigenous populations and eventually led to the latter’s replacement [1, 7, 8].

While the westward migration of the WSH into central Asia and northern Europe is well documented [1-6, 8], much less is known about the origins of the eastern steppe populations, the timing and extent of eastern expansion of the WSH, and the development of dairy pastoralism in Mongolia, where it is still a dominant feature of today’s population. Recently, Jeong and 25 colleagues from five countries published a scientific paper [1] describing ancient human population movements and “…the rise of dairy pastoralism on the eastern Eurasian steppe.” The research was published in the prestigious scientific journal Proceedings of the National Academy of Science (USA). Their study generated a few surprises leading to a new concept about how societies change. The investigators provided evidence that cultural transfer between populations rather than population replacement by migration can be a powerful means of societal evolution. Their example was the adoption of dairy pastoralism by an early Bronze Age population living in what is now northern Mongolia.

One of the first steps at the dawn of agriculture was the herding of ruminant animals, which were used as a reliable and mobile food source [7]. Many areas of the world, including most of the Eurasian steppes, were unsuitable for growing crops to provide food for human populations. However, ruminant animals were used by ancient populations to efficiently convert low-quality pasture into energy-dense meat and milk for human consumption. Ancient nomadic human populations quickly learned that the biological equation for human benefit from consuming milk or foods derived from milk over the lifetime of an animal far outweighed the human benefit from the slaughter of the animal solely for meat [9]. Thus, dairy pastoralism generated big nutritional advantages for ancient human populations at a time when acquiring adequate food was an unrelenting daily challenge. The dairy animals additionally provided clothing, ultimately meat, and tools derived from horn and bone [6-8]. Nomadic ancient humans also efficiently adapted to changing weather and seasonal variations by moving their animals to fresh pastures. They could use different animal types to suit the climate and vegetation, while the number of animals was efficiently aligned with the size of the human population it supported. Thus, dairy pastoralism was efficient, highly mobile, and it had enormous benefits to ancient human populations, especially migratory populations [1, 3, 7].

Dairy Pastoralism in Mongolia Was Adopted from Neighbors

Jeong and colleagues [1] focused their scientific attention on the origins of dairy pastoralism in the eastern Eurasian steppes, i.e., present-day Mongolia. The investigators used biological samples from individuals present in 22 Late Bronze Age burial mounds at six sites in northern Mongolia (the Deer Stone-Khirigsuur Complex; DSKC). The sites are characterized by engraved upright stones, stone mounds, and the absence of pottery [1, 10]. Scientists who excavated related ancient sites found the bones of sheep, goats, cattle, and horses, but it was unclear whether these animals were used for milk production [1, 10]. Jeong and colleagues dated the human individuals present in the DSKC mounds by radiocarbon analysis to between 3,000–3,300 years ago. The investigators initially used variations in DNA sequence to genetically profile the individuals. This powerful technique allowed the identification of related groups of people, their likely ancestral populations, and thereby helped map ancient human migrations across the continental landscape and over long periods of time. Unexpectedly, the investigators discovered that the 22 DSKC individuals (except for one person) were genetically distinct from the neighboring WSH. Jeong and colleagues concluded that the DSKC individuals were descended from an early Bronze Age hunter-gatherer population located immediately to the north of the Mongolian burial mounds, i.e., in the Lake Baikal region of southern Siberia. This is the largest fresh water lake (by volume) in the world and presumably, it was a natural ancestral home for the hunter-gatherer population.

Jeong and colleagues next turned their attention to the teeth of nine individuals from the DSKC burial mounds [1]. The investigators explained that dental calculus or tartar, which is a form of hardened plaque on teeth, contains traces of what is eaten by a human. They predicted that if the DSKC population was practicing dairy pastoralism then there should be detectable milk proteins on the teeth of people from the Mongolian burial mounds. The investigators used a highly sensitive and precise technology, mass spectrometry, for analying the tartar. They discovered fragments of two milk proteins, casein and lactoglobulin, on the teeth from seven of nine of the individuals. Additionally, the investigators determined that these milk proteins came from several ruminant species, including sheep, goat, and cow. They concluded that these results provided direct evidence that the DSKC population practiced dairy pastoralism. There was also good evidence that the WSH adopted dairying much earlier than the DSKC population [7]. This information and the absence of WSH genetics in the DSKC population strongly suggested to the investigators that DSKC dairy pastoralism was culturally adopted from the WSH. Jeong and colleagues’ conclusion sharply contrasted with what happened when the WSH migrated into northern Europe, where there was a wholesale population replacement that caused a major cultural transition and the introduction of dairying into Europe.

The investigators also highlighted another intriguing feature of the WSH and DSKC populations—some WSH acquired a new genetic mutation, lactase persistence, about 7,500 years ago [11, 12]. The WSH then carried the mutation during their massive western migration into Europe starting about 4,500 years ago [9, 11]. Jeong and colleagues explain that the mutation enabled human adults to drink milk and efficiently metabolize milk lactose to generate energy. People who did not carry the mutation were unable to efficiently extract this energy because they were intolerant to lactose, which made them avoid milk [9, 13]. The inference from multiple scientific groups is that the mutation gave the migrating WSH a big advantage over western indigenous populations with the result that the WSH prospered, reproduced more efficiently, and more rapidly spread their genetics, thereby eventually replacing the original populations [9, 11, 13]. Strikingly, the mutation was absent in all 22 of the DSKC individuals. Clearly, dairy pastoralism was advantageous to the DSKC population over thousands of years even though they did not carry the lactase persistence mutation. Perhaps the DSKC population developed food preparation processes that reduced the level of lactose in milk so that they could maximally benefit from its many additional nutritional advantages such as high levels of protein, fat, and calcium.

Dairy pastoralism was strongly advantageous to ancient human populations [7, 8]. Jeong and colleagues concluded that this type of food production system was culturally transferred between populations on the Eastern Eurasian steppe and not by migration and population replacement. In contrast, dairy pastoralism was introduced into northern Europe and central Asia by the replacement of the indigenous populations by migrating WSH [9, 11, 13]. The success of the WSH migration westwards into Europe may have been greatly strengthened by presence of the lactase persistence mutation in their genome. Thus, ancient cultural practices and ideas were transferred between populations using different mechanisms in different places. The recent and surprising identification of cheese in the 3,200-year-old Egyptian tomb of Ptahmes [14] suggests that the extent of cultural transmission of dairy pastoralism between populations may have been underestimated. Cheese production greatly reduces lactose content and allows consumption of dairy products even when adult populations do not carry the lactase persistence mutation. Dairy products, like cheese, are an example of know-how and ideas that were transferred between populations just as fast or even faster than ancient population migrations. The Egyptian cheese also contained bacteria that cause a highly contagious disease in humans and livestock, brucellosis. Cultural transfers between populations may have passed on more than just ideas.

6. Beckwith C. Empires of the silk road: a history of central Eurasia from the Bronze Age to the present. New Jersey: Princeton University Press; 2009.