Dairy for the Lactose Intolerant 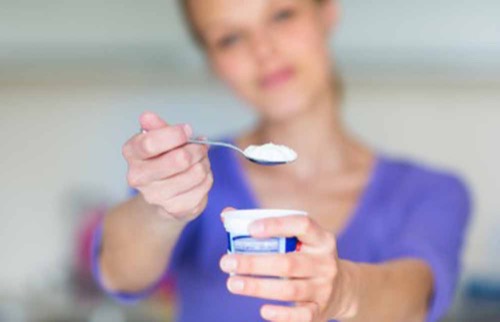 Ever watched a lactose intolerant friend shovel yogurt into their mouth, and wondered, in anticipated horror, at what the outcome may be? Strange as it may seem, fully lactose intolerant people tend have little problem digesting yogurt, even though its lactose content is approximately equal to milk’s. There is no need to check for the nearest toilet. The explanation for this apparent puzzle lies with the bacteria in yogurt. Each millilitre of the stuff contains about 100 million bacterial cells—and each of these acts like a microscopic supplement, a capsule or pill if you like, of the enzyme that lactose intolerant people cannot make: lactase.

Scientists have suspected that this might be going on in the bellies of lactose intolerant people since the 1970s, but it has taken many years to gather the proof. The original hints came from experiments on rats that found that the bacteria in live yogurt stayed alive for a surprisingly long three hours after the animals had swallowed them [1]. In the 1980s, the research progressed to measuring the amount of hydrogen in the breath of human subjects. In theory, a measure of how flammable someone’s burps would be can reveal the activities of colonic microorganisms after a potentially lactose-intolerant person has consumed lactose. The higher the levels of hydrogen in someone’s breath, the less able they are to metabolize this sugar—hence it remains intact all the way along their digestive tract until the colon, where hydrogen-producing microorganisms metabolize it instead. In 1984, researchers at the University of Minnesota reported that the breath of lactose-intolerant folks contained just a third of the levels of hydrogen after they ate yogurt than was the case after they consumed an identical amount of lactose from milk [2].

So, what exactly is going on? The answer is manifold. As previously mentioned, live yogurt provides a community (of bacteria) to which a lactose intolerant yogurt lover unknowingly outsources the parts of digestion that they are ill-equipped to handle on their own. There are two important facets of the process of yogurt digestion that make this possible. The first keeps the bacteria in yogurt alive as they pass through the protein-busting, acidic soup of the stomach. Yogurt achieves this because it is a natural buffer. Tests have shown that yogurt needs about thrice as much acid to shift its pH from 4.1 to 2.0 as milk does—which explains the strangely long life of the bacteria in those rats in the 1970s.

Second, yogurt is slower than milk at moving through the gut; the longer transit time is probably due to milk’s runnier consistency. The yogurt bacteria therefore have more time to work their magic on lactose once they’ve dodged the bullet that is the stomach’s gastric juices. At this point in their gastrointestinal journey, they meet bile, a substance that has been found to increase the activity of these bacteria’s lactase enzymes, perhaps by making their cells more permeable to lactose [3]. All in all, the bacteria in yogurt then get the job of lactose digestion done before the microorganisms that give lactose intolerant people a high score on the hydrogen breath test do: yogurt bacteria operate almost entirely in the small intestine, not in the colon. The result is the absence of unpleasant symptoms.

With the basic science more or less understood, recently researchers have wondered about the effects of flavored yogurts, eating yogurt in combination with other kinds of food, and the relative efficiencies of different species of yogurt bacteria at digesting lactose on behalf of their human consumers.

Unfortunately for the lactose intolerant who prefer the taste of flavored yogurt, it doesn’t do as well as unflavored yogurt on the hydrogen breath test. In one study, flavored yogurt scored 77 parts per million of hydrogen, placing it between unflavored yogurt (at 37 ppm/h) and milk (185 ppm/h) [4]. For some reason, a greater proportion of the lactose in flavored yogurt survives to the colon than in the case of unflavored yogurt. Why this would happen remains unclear. Theories include the dilution of yogurt by flavoring components (like fruit), some kind of osmotic influence of added sugar in the stomach, and potential, later, inhibitory effects of glucose. Similarly, the mechanistic picture is rather unclear when it comes to eating yogurt concurrently with other sorts of food. Might this undo the buffering effects of yogurt in the stomach? Apparently not, at least not in the case of 10 accompanying meals tested by 22 people, under the guidance of a different team at the University of Minnesota [5]. They focused on some typical breakfasts, such as toast and peanut butter. But even when the subjects ingested pretty acidic foods with their yogurt, like orange juice, banana (surprisingly, pH 4.5) and fruit jelly on their toast, the lactase-digesting effects of yogurt remained in tact; if anything, they improved.

And what about the different species of bacteria that can be employed to ferment milk in the yogurt-making process, and give the final product that tangy, yogurt-y taste? So far, the research that has been done indicates rather minimal differences between the most widely used species, Streptococcus thermophilus and Lactobacillus bulgaricus. In some tests, the amount of bacteria has been shown to matter; when the population is cut from 100 million to 10 million per millilitre, its lactase-digesting assistance is rendered pointless [6].

So, dairy-adoring people who struggle to drink milk without an embarrassing or uncomfortable incident are fine to gobble yogurt, with whatever they like and, ideally, of the unflavored variety. Most people without northern European genetic ancestry fall into that group. Ultimately, lactose intolerance comes down to the genetics, or more specifically to the promoter (on/off switch) region of the gene that encodes the lactose-digesting enzyme, lactase—which everybody has, because all humans are powered exclusively by breast milk or its modern replacements early in life. There are various indications that the deactivation of this promoter that happens after the toddler years of lactose-intolerant people can be gently undone by gradual and continual exposure to lactose. Indeed, yogurt appears to be ideal for this biochemical training. The tolerance of people who initially struggle to digest lactose has been found to improve when they regularly eat some yogurt. Only a little yogurt, once per day for 15 days, is enough to make a difference on the hydrogen breath test [7].