Dairy Intake May Help Protect Against Functional Disability in the Elderly 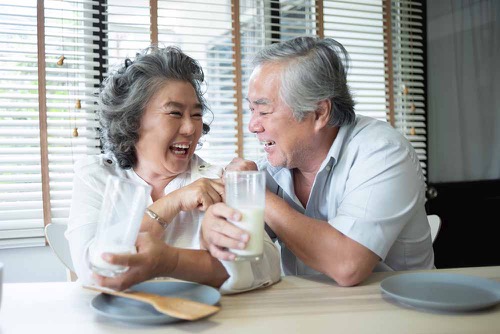 Aging-related ailments can interfere with the daily life of the elderly. Older adults are at greater risk of diseases such as dementia or cardiovascular and orthopedic diseases. These diseases can contribute to functional disability—a decrease in physical, cognitive or emotional functioning that results from a health condition and adversely affects a person’s daily personal and social activities (1,2). Researchers have thus been looking for ways to decrease functional disability in the elderly.

Dairy intake has been reported to contribute to a lower risk of diseases such as dementia, cardiovascular disease, and orthopedic disease (3-7). A recent study by Dr. Sandra Iuliano at the University of Melbourne also found that dairy consumption was associated with favorable cholesterol ratios in older adults (8). These studies suggest that dairy intake may have some favorable effects in the elderly; however, little is known about the association between dairy intake and functional disability (9,10). “The literature is still quite mixed, not necessarily because there’s no effect, but because these kinds of studies are really hard to do,” says Iuliano.

“The association seen in the study seems quite reasonable, as providing dairy protein in combination with exercise is likely to provide the ability to maintain function,” says Iuliano. “One take-home message of the study is that dairy intake may be a good avenue for protein,” she says. “But there could be other components involved that we don’t understand,” says Iuliano.

The results suggest that dairy products may have a protective influence on functional disability and its progression in the elderly. However, Iuliano notes that the new study is still quite exploratory. “It can generate thought, and from this thought we can generate better trials,” she says.

In the new study, the researchers analyzed data from an ongoing population-based study that is designed to evaluate the risk factors for lifestyle-related diseases (12). Eight hundred fifty-nine elderly Japanese residents of Hisayama without functional disability were followed up for seven years. The residents’ dairy intake was evaluated using a diet history questionnaire, and the researchers assessed their functional disability at baseline and at follow up.

The researchers found that the risk of developing functional impairments, especially impairments in intellectual activity and social roles, was significantly lower in participants who consumed dairy food compared with those who did not. These kinds of impairments are thought to develop at early stages of functional disability (13, 14). The risk of more severe functional disability also decreased significantly with higher dairy intake, even after accounting for various confounding factors.

The study also suggests that the protein component of dairy might be playing a role in decreasing the risk of functional disability. “Protein could be a key driver of the effect, as when the researchers adjusted for protein a lot of the association went away,” says Iuliano. There was also a strong positive association between dairy and total protein intake in the study participants. “So dairy was the main source of protein,” she says.

It’s unclear how generalizable the study findings are to other ethnic populations with different lifestyles. “We need to look at the dairy intake in the context of the country,” says Iuliano. She suggests the need for additional long-term studies. “The ideal would be to follow a large group of people over time, with half getting extra dairy food and the other half continuing with their normal diet,” says Iuliano.

Iuliano also suggests that researchers could monitor ongoing trials more frequently, maybe by assessing dietary intake once a year so that they can look for trends. “If we’re monitoring participants over time, we can see when functions decline and look at whether there were changes in their dietary pattern then,” she says.

The study concludes that higher dairy intake is associated with a lower risk of functional disability and its progression in the elderly, and suggests that dairy products could have a protective effect against functional disability. But more studies will be needed to confirm these results and examine the mechanisms by which dairy could be having these effects.

“The beauty of dairy foods is that there are lots of things we still don’t know,” says Iuliano. “There may be interactions during fermentation, or there may be components that in isolation do one thing and when they’re combined do another thing,” she says. “That’s what makes it so complex and fascinating to study.”