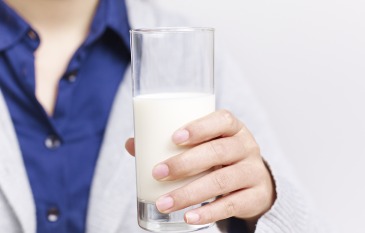 Can being more sensitive make you healthier? It can, if you are one of the nearly 30 million Americans living with type 2 diabetes. Although type 2 diabetics produce insulin, they have a very low sensitivity to this hormone. Without injecting additional insulin, blood sugar levels reach unhealthy levels that, over time, can result in damage to the kidneys, nerves, and blood vessels. While diabetics are instructed to avoid foods that raise blood sugar levels, there are other foods that could be ideal for diabetics because they can increase the body’s sensitivity to insulin. Topping this list are dairy foods such as milk and yogurt that have bioactive factors that increase the body’s response to insulin and a low glycemic index. But despite these demonstrated physiological actions, many studies have failed to show any effect of increased dairy intake on blood glucose metabolism. Two new review papers (1, 2) help make sense of these conflicting findings and suggest the discrepancy may have more to do with the complexities of studying a metabolic disease, than the biological effects of dairy on insulin tolerance.

We often think of sugar as something we need to avoid in our diet, but sugar (specifically glucose) is the fuel that our body runs on. It is used both for immediate energy needs by cells and also stored for future use by the liver and muscles. When we eat foods that contain glucose, such as fruits, vegetables, starches, and dairy, the pancreas responds by producing insulin, a protein tasked with moving glucose from the bloodstream into the cells. If the cells already have enough glucose, insulin also plays a role in converting glucose into its storable form, glycogen.

This whole system is disrupted in individuals that have low insulin sensitivity, or what is commonly referred to as insulin resistance. Although their pancreas produces insulin in response to glucose in the bloodstream, their cells have a decreased sensitivity to the action of insulin. As a result, more insulin is needed to transfer glucose into the cells. The pancreas responds by increasing insulin production. Type 2 diabetes occurs when pancreatic insulin production can no longer keep up with insulin requirements. Without the addition of synthetic insulin, heightened blood glucose levels (called hyperglycemia) can result in kidney damage, blindness, heart disease, and stroke.

So, why would cells that were once sensitive to insulin become resistant to its chemical actions? Extra body fat, especially that stored around the abdomen, appears to be the most important non-genetic factor explaining the decrease in insulin sensitivity. Fat cells, or adipocytes, produce hormones and pro-inflammatory molecules that interfere with the signals insulin uses to transport glucose into cells (1-4). The more abdominal fat cells, the greater amount of disruptive molecules are produced, the more insulin is needed to get the job done.

There is one piece of good news about low insulin sensitivity: it is not permanent. Just as an increase in fat cells can reduce sensitivity, a decrease in fat cells, through weight loss or muscle-building exercise can increase it. Exercise is also able to improve insulin sensitivity, even without changes in body weight (1, 2). And because many foods contain bioactive components (e.g., phytoestrogens in soy, antioxidants in fruit), it is not surprising that dietary changes may exert positive effects on glucose metabolism as well.

Numerous studies have examined dairy foods for their potential preventative role in the development of insulin resistance, as well as their ability to increase sensitivity in type 2 diabetics (1, 2). Dairy limits post-prandial hyperglycemia, which is a fancy way of saying how much your blood glucose levels rise after consuming a meal. The smaller the rise in blood sugar, the less insulin needs to be produced. This is believed to be the result of actions of whey proteins that are unique to milk and milk-derived foods. Whey proteins contain essential amino acids that have been demonstrated to stimulate the pancreas to produce insulin (1). And when digested, these proteins are believed to form bioactive peptides (chains of amino acids) that enter the bloodstream and influence glucose metabolism (1). Finally, both whey-derived peptides and calcium may also influence the types of chemicals and hormones secreted by fat cells that can interfere with insulin’s ability to move glucose from the bloodstream into the cells (1).

Given this list of ways in which dairy foods influence glucose metabolism, it may seem surprising that it is still unclear whether adding dairy to the diet has any effect on insulin sensitivity. Two recent reviews on the topic (1, 2) suggest that the complexity of the topic —glucose metabolism—is partly to blame.

Insulin sensitivity is influenced by numerous factors, all of which interact with one another. Simply changing one factor, such as diet, could unknowingly affect many other factors, such as body fat. Are the results because of the dietary change, or because of some other factor that was not accounted or controlled for? It is not possible to establish causality, because so many factors can cause changes in insulin sensitivity. In their review, Turner et al. (2) were specifically interested in removing the potentially confounding variable of weight loss (or gain). But even among the ten weight-stable, randomized, controlled trials they compare, there are major discrepancies in results: four studies show a positive effect of dairy on insulin sensitivity, one showed a decrease, and five found no effect at all.

And herein lies the next likely reason for differences in findings: methodological variation, particularly the timing of the intervention studies. Short-term studies (in Turner et al.’s review, those < 8 weeks in duration) failed to identify any significant changes, while those between 12 and 24 weeks found a positive effect of dairy on insulin sensitivity. At first glance, this seems to indicate that dairy foods have a cumulative effect on the action of insulin that can only be measured in longer randomized studies. However, only one of three six-month studies reviewed by Turner et al. (2) reported an increase in insulin sensitivity as a result of increased dairy consumption.

Turner et al. (2) believe that there are simply just too few studies that effectively test for the relationship between dairy intake and insulin sensitivity, and among those that have, it is not possible to directly compare the results because of differences in the type of dairy foods used (low-fat milk, yogurt), outcome measures (e.g., fasting insulin, glucose tolerance), and study participants (normal weight, obese, diabetic). Ballard and Bruno (1) echo these frustrations. They believe there is a strong foundational basis for the mechanisms by which dairy interacts with glucose metabolism and increases insulin sensitivity, but it has yet to be clearly demonstrated in long-term randomized trials because of a failure to control for confounding variables, such as changes in body weight or carbohydrate intake, that can accompany dairy intervention studies.

Given that diabetes is the seventh leading cause of death in the U.S., this seems like a conflict that requires quick resolution. Both review papers provide important signposts for future research projects on dairy and insulin resistance. Although the effect of dairy on insulin resistance may not be as profound as that of weight loss or exercise (2), a lifestyle change that can be easily implemented could have a large impact on the fight against diabetes.