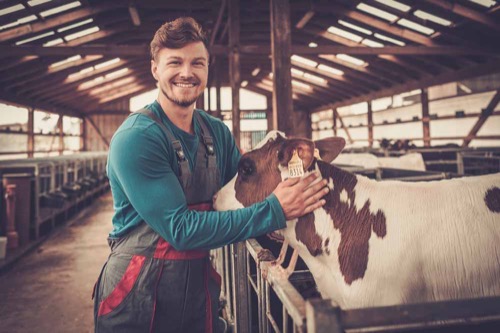 Reaping the rewards of the genomic revolution in selective breeding in of dairy cows requires an informed and engaged dairy farmer response. The technology has moved rapidly in recent years, and the introduction of molecular breeding values has resulted in significant gains in production [1]. However, the rate of technology uptake for end users is a limiting factor for capitalizing on technology transfer. A study published in December 2016 from a Danish group of dairy scientists reports that farmers rank health and management qualities above production traits in their cows [2]. However, this ranking differs depending on whether the farmer is classified as organic or conventional.

Many countries have dairy herd improvement schemes. These schemes have been traditionally based on the continuous improvement in production and profitability of herds, and have focused on a few key economic traits. The value assigned to key traits varies from country to country but mostly focus on some combination of milk production, protein yield, and fat yield. There has been extensive investment in designing and implementing these schemes over decades, and they have contributed to major improvements in modern dairy. The schemes are based on a complex system of ranking the value of bulls following many years of progeny testing, in which the performance of the daughters of the bulls is assessed for on-farm performance. Dairy farmers are then able to select from the available bulls to inseminate cows to maintain and improve their herds as they are gradually replaced.

Recent advances in genetics and genomics have led to rapid developments in using detailed genomic information to apply in these herd improvement systems. The use of genomic technologies has the capacity to shorten the time taken to evaluate dairy animals and to capture the best quality genetics from a DNA test [3]. Genomics also has the capacity to increase the number of traits that can be accommodated within the selection process. Including additional traits is potentially advantageous to avoid inadvertent selection for unwanted production and health characteristics, and to possibly incorporate customized traits that may be specific to farming systems or identified issues within specific herds. The results of these programs can be very impressive, but returns on the enormous investment in developing these systems can only be realized if farmers are informed and make use of them.

Recent studies have investigated the viewpoints of farmers about the value of genetic selection compared with the breeding values that are currently in place. The most recent study was a survey of Danish dairy farmers conducted by Slagboom et al. [2] from Aarhus University, which asked farmers about preferences for improvements in their cows. Denmark has a system for certifying organic farmers, and the survey covered both conventional and organic farmers. The farmers were asked to rank their preferences for ten traits, ranging from health welfare to milk production characteristics. When they analyzed the results, the researchers identified a number of groupings in the data according to farmers’ preferences: Health and Fertility, Production and Udder Health, Survival, and Fertility and Production. Mostly, farmers were concerned with the challenges that were immediate to on-farm management, in preference to the higher-level goals of national herd improvement schemes. Interestingly, organic farmers had less of a focus on health and more on production traits. This was presumably because they indicated that their herds had lower incidence of disease than the conventional farm herds but also had lower average milk production. This pattern was observed in other preferences; that is, farmers responded according to the areas that were of immediate concern to their herd management experiences.

The researchers compared their results with those of similar surveys carried out by other scientists in Sweden [4] and Australia [5]. In Sweden, organic farmers chose preferences that were the opposite of those in the Danish study. It is very difficult to unravel the reasons for these differences, but Slagboom et al. [2] suggest that the design of their survey may have resulted in a more objective response. Australian farmers were not so clearly grouped by farm characteristics, and there were no organic farmers identified in the study. Variation in their responses did not correlate with production systems and led to the conclusion that farmer preferences aligned with their intrinsic views [5]. Overall, these studies reinforce the view that farmers are mostly concerned with the specific challenges that they each face, and that these challenges vary across the farming population.

The bigger question is, can anything be done to address the concerns of farmer groups using genetic selection? This is certainly possible, with tailored target traits measured and made available to farmers, they can address specific issues, while the overall goals for the national herds also can be addressed.