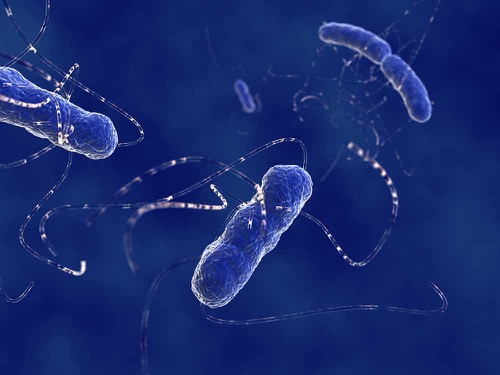 It seems that more and more frequently, the news reports on outbreaks of pathogens like Escherichia coli, which can result in food poisoning. The common approach to treatment is antibiotic therapy, but sometimes this treatment is not effective, or the bacteria are resistant to the antibiotic. Scientists are working hard to find ways to control bacteria without antibiotics. A study by Douëllu et al. [1] has shown how a component of milk—milk fat globules (MFG)—may counter effects of E. coli.

Milk is a complex fluid containing proteins, carbohydrates, and lipids. The lipids, also known as fat, are largely organized into MFG. Lipids naturally form droplets when mixed with water. These droplets are usually hollow spheres (or micelles) with the lipids arranged so that parts of the molecules repelled by water molecules are buried inside the droplet. However, MFG are not just hollow vesicles, rather they are a complex mixture of lipid droplets coated with layers of lipid and a range of proteins. Some of these proteins are coated with sugars to varying degrees. These glycosylated proteins may provide the key to the ability of MFG to bind to and interfere with bacterial infection.

The MFG develops from lipid droplets that form in epithelial cells that line the tiny, milk-producing alveoli of the mammary gland. When the lipid droplet migrates from inside the epithelial cells through the cell membrane and into the lumen of the alveoli, they become coated with parts of the epithelial cell membrane complexes and thereby capture proteins that are associated with these membranes. As a result; the MFG are approximately 50% protein and 50% lipid [2]. MFG have been studied extensively in recent years and have become a focus of research concerning infant formulations. Traditionally, infant formula had lipids substituted by vegetable oils, and little attention had been paid to MFG content. However, the research with MFG-supplemented formula points to a potential benefit of providing MFG for neonatal gut health and microbiome establishment [3].

The range of proteins detected in MFG varies according to concentration [4-8], but prominent proteins are responsible for some of its most effective bioactive properties. One of the most abundant proteins is a member of the mucin family, MUC1. This is one of the most highly glycosylated proteins known. Its structure includes multiple repeated sequences of amino acids. This extends the length of the protein so it protrudes beyond the surface of the MFG and potentially provides a protective barrier. This is complemented by the multiple molecules of attached oligosaccharides or sugars that coat the protein, adding to the barrier effect, but also providing binding sites for bacteria. Bacteria have their own set of molecules which seek out oligosaccharides as a natural link to adhere to cells and tissues.

With these MFG properties in mind, Douëllu et al. [1] set out to research the potential for MFGs to combat infection by dangerous bacteria that are commonly identified as a food-borne pathogen. The potential dangers associated with the bacterium known as E. coli is well known. This organism is ubiquitous in our environment, including in the gut of humans and animals. There are many strains of E. coli, some are harmless and some of are known to cause disease by producing Shiga toxin [9,10]. These enterohemorrhagic strains can cause sickness, from simple gastrointestinal upsets to violent haemorrhage, kidney failure, and death. The Centers for Disease Control estimates that over 200,000 infections occur each year in the USA alone. In a recent event in 2018, five people died and over 200 were infected by the O157:H7 strain following distribution of contaminated vegetables. In Europe, over 4,000 cases were recorded due to contamination of fenugreek sprouts by the O104:H4 strain in 2011. A number of outbreaks have been linked to contamination of raw milk products [11].

The first stage in infection is adherence whereby molecules on the surface of the bacteria bind to cells of the intestinal lining. Once bound, the bacteria can invade the tissue and cause infection. Douëllu et al. [1] tested the ability of MFG to influence adherence of E. coli strains in three different ways. First, they wanted to examine whether the bacteria bound directly to MFG. They grew bacteria in the laboratory and mixed them at different doses with MFG preparations. They stained the bacteria so that they could observe the response under a microscope. They found that regardless of the strain of bacteria used, they were bound by the MFG. Secondly, they established sterile cultures in the laboratory using cells that simulate those found lining the intestinal walls of humans. Using this system, they were able to measure bacterial interactions. When bacteria were introduced to these cultures, they found that added MFG hampered bacteria-cell interaction, and as a result reduced the numbers of bacteria that adhered to the cells. Thirdly, they fed laboratory mice cheese containing low or high levels of MFG. Some mice were given cheese contaminated with different bacterial strains, and others were given cheese followed by a dose of bacteria. When they examined the intestines of mice, they found that the contaminated cheese containing the higher levels of MFG reduced bacterial colonization of the intestinal surface and altered the spread of this contamination. The cheese was less effective against direct bacterial inoculation, although this seemed to be related to the relatively high dose administered.

This study adds important information to the growing evidence for anti-microbial properties of milk and dairy foods [1]. The anti-microbial properties are characterized by a number of highly developed approaches that include passive neutralization, passive inhibition, and sequestering or bioactive molecules. The study highlights the need for a detailed understanding of the impact of processing on these properties of milk, and further investigation of relevant bioactivities of milk-derived molecules and micro-structures. As stated by the authors of the study, it also adds to the prospect that milk-derived bioactive molecules may be useful as preventative or competitive treatments in cases of food poisoning.