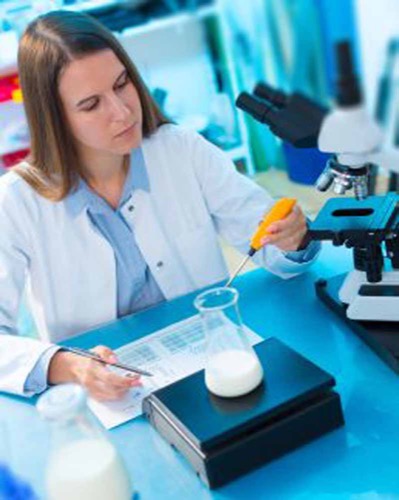 Consuming dairy products, such as milk or yogurt, is known to be good for general health [1]. New research may make dairy products even more beneficial by enabling them to treat certain autoimmune diseases such as arthritis.

In a study conducted by David Pascual at the University of Florida, arthritic mice were fed genetically-modified probiotic bacteria, or a yogurt-like product created using the same bacteria. In both treatments, the mice experienced a dramatic reduction in their arthritis symptoms [2]. “We believe that a yogurt-like therapeutic may have a tremendous appeal to a segment of consumers who are less willing to use ‘pills’,” writes Pascual in an email.

The same approach could be used to develop therapeutics against other autoimmune and inflammatory diseases as well. “What really makes our approach unique is that the very same ‘tool’ can be adapted to different autoimmune diseases, like a sort of panacea,” writes Pascual.

Rheumatoid arthritis (RA) is a chronic inflammatory disorder that affects about 1% of the US population [3,4]. Physical and nutritional therapies are unable to stop the disease’s progression, and pharmacological therapies typically rely on anti-inflammatory drugs, which have harmful side-effects and often increase the risk of other infections [5,6].

To find other ways to modulate harmful autoimmune and inflammatory reactions, researchers have looked to pathogenic bacteria for inspiration. “One of the ideas we pursued is that pathogens attach to mucosal tissues in such a way as to silence the immune response, avoiding detection,” writes Pascual. To attach to the intestinal mucosa and colonize it, certain pathogenic Escherichia coli express proteins known as “colonization factor antigens.” In previous work, the researchers genetically modified a non-pathogenic strain of Salmonella typhimurium to express one of the E. coli proteins, Colonization factor antigen I (CFA/I). They found that the modified bacteria could serve as an oral vaccine with anti-inflammatory properties, and could help treat autoimmune diseases [7,8]. “Our data showed that the Salmonella-CFA/I remarkably ameliorated RA symptoms in an experimental mouse model,” writes Pascual.

“Because S. typhimurium is intrinsically proinflammatory, as well as [due to] regulatory concerns about its therapeutic application, we decided to switch to a food-grade organism,” writes Pascual. “The logical choice was lactic acid bacteria and specifically, Lactococcus,” he writes. Lactococcus lactis is commonly used in fermented dairy products and has been approved for human use [9,10].

The researchers engineered Lactococcus to express CFA/I and tested their therapeutic properties in a mouse model of arthritis. “Following two doses, our recombinant Lactococcus expressing CFA/I showed a stunning capability to ameliorate RA in mice,” writes Pascual. “In contrast, untreated mice or mice given Lactococcus (without CFA/I) only were still susceptible to RA,” he writes. The therapeutic effect appeared to be mediated by the suppression of pro-inflammatory signaling molecules.

The researchers then fermented milk using the CFA/I-expressing bacteria, creating “a dairy product whose texture and olfactory features are indistinguishable from yogurt,” writes Pascual. When the mice were fed this yogurt-like preparation, their arthritic symptoms reduced dramatically.

The researchers are currently testing their approach in a mouse model of type I diabetes, as well as in large animal models of human disease. “Once we can demonstrate efficacy in these larger animals, we can pursue testing in humans,” writes Pascual. “While the final application in humans may not be exactly around the corner, we are ecstatic at the flexibility of our system,” he writes.