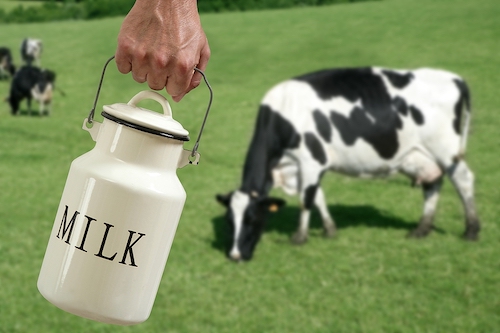 Food allergies can be a real kick in the guts, causing a range of symptoms from mild discomfort to life-threatening anaphylactic reactions. About 2–3% of babies and young infants have allergic reactions to proteins in cow’s milk, making this the most common food allergy in early childhood [1].

“Beta-lactoglobulin is a pretty major protein in milk, and if you’ve got that allergy, it would be a good thing if you don’t have this protein in milk,” says Dr. Alison Van Eenennaam of the University of California at Davis.

There are a number of processing technologies, such as enzymatic hydrolysis, that can reduce the allergenicity of milk proteins. But these technologies are expensive and may not fully remove the allergens from milk [4].

As a result, researchers have attempted to use genetic methods to disrupt BLG production in animals. Knocking out the genes for BLG production could result in animals that produce hypoallergenic milk that doesn’t contain BLG.

“The beauty of genetics is that it’s cumulative and permanent,” says Van Eenennaam. “If you can do it genetically, then it’s done forever and it gets passed on from generation to generation, whereas if you have to remove it some other way then you’re going to have to keep removing it that other way,” she says.

Genetic approaches are already being attempted for other food allergies. “Certainly there are other groups trying to remove allergens from eggs, for example, and obviously some plants have gluten and things like that that people are trying to work on, so it’s a reasonable approach,” says Van Eenennaam.

While researchers have had the ability to knock out genes for decades, newer genome editing technologies such as CRISPR-Cas9 and TALENS have made the process more efficient, precise, and easier to use, including in livestock [5–8]. “There are groups working on cattle to introduce heat tolerance, disease resistance such as tuberculosis resistance, and there are groups working to eliminate horns so that dairy cows don’t need to be de-horned,” says Van Eenennaam.

In a new study, researchers combined cloning techniques with genome editing to create a cow cell line that lacks the genes for producing BLG [9]. They used the same cloning technology used to clone Dolly the sheep, called somatic cell nuclear transfer (SCNT), along with CRISPR genome editing to knockout the genes responsible for BLG production. The researchers thus obtained an embryonic fibroblast cell line lacking the genes responsible for BLG production. Transplanting these cells to recipient animals is expected to create cows without the ability to synthesize BLG, which would thus produce BLG-free hypoallergenic milk [10].

SCNT cloning and CRISPR are not new technologies. “We’ve had clones since Dolly, and CRISPR editing is not novel, so there is not a lot of novelty there,” says Van Eenennaam. But the new study shows that combining these techniques could help eventually produce BLG-free milk. However, it’ll require a few more steps to get to that point.

“The researchers still have some not insurmountable technical issues to deal with, so they’re at least three or four years away from having the knockout cow,” says Van Eenennaam. “Once they have the knockout cow, if they want to produce a line of it then they’re going to have to genome edit the other sex to get a clone of that if they want to start breeding,” she says. “And then basically you’re going to have to keep breeding within those knocked out animals to make something that’s inherited, assuming it doesn’t hurt them in any other way,” says Van Eenennaam.

Researchers have previously used a different approach to create cattle producing BLG-free milk. In an earlier study, researchers injected TALENS genome editors into zygotes instead of combining SCNT and CRISPR [11]. They used this approach to generate BLG-knockout calves and showed that they did not produce BLG in their milk. They also characterized the BLG-free milk and showed that there was a slight increase in protein and lower lactose content, although fat and lactose levels remained within the normal range.

These studies indicate that regardless of the specific approach used, genome editing could be a viable technique for producing BLG-free hypoallergenic milk. But at least in the US, it may take a while before such milk makes it to your grocery store. “It’s a multi-year, multi-million-dollar regulatory process before they can enter the food supply,” says Van Eenennaam.

As a result, it’s unclear when genome-edited hypoallergenic milk will be approved for food use. But certainly for those suffering from milk allergies, it can’t come soon enough.