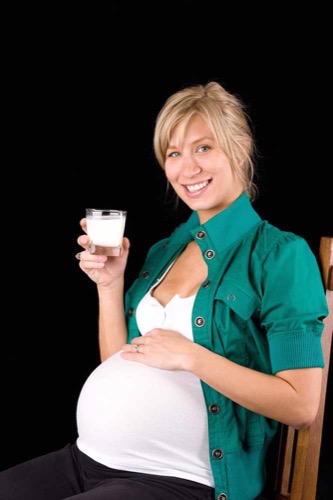 New mothers are often given a mile-long list of do’s and don’ts, dished out by doctors, families, friends, and even strangers.  Somewhere along the way, eating certain foods got put on the “don’t” list.  Typical scenario: sleepy new mother eats peanut butter sandwich, mother’s friend reacts as if eating peanuts is akin to balancing one’s child over the food allergy abyss.

Cow’s milk allergy is often in the crosshairs of such well-meaning, but misguided, allergen avoiders. People commonly believe that potentially allergenic foods should be avoided during pregnancy and lactation to help prevent the development of those allergies in their kids. Let us put that myth to rest. A 2008 report in Pediatrics, the official journal of the American Academy of Pediatrics, concluded there is insufficient evidence to recommend that women avoid allergenic foods, such as milk, during pregnancy or lactation for the purpose of preventing allergic disease (1). Furthermore, avoidance of foods like milk puts mothers at risk for nutrient deficiencies.

In fact, avoidance of cow’s milk by a breastfeeding mother may even increase the infant’s chance of developing cow’s milk allergy.  In a new study appearing in Clinical & Experimental Allergy, researchers reveal evidence for why breastfeeding babies are less likely to develop cow’s milk allergy when their mothers drink cow’s milk (2). When mothers consume cow’s milk, they have greater amounts of secretory IgA in their breastmilk. Secretory IgA is a type of antibody that lines the infant’s intestinal tract to form a barrier capable of neutralizing threats that come down the pipe. Secretory IgA (sIgA) is like a bouncer at the local club, letting in the good clientele (nutrients) while keeping out the troublemakers (pathogens).

Given that milk-avoiding mothers had lower levels of sIgA in their breastmilk (2) and previous studies had also associated low breastmilk sIgA with development of cow’s milk allergy (3,4), the researchers next looked for a reason why breastmilk sIgA might prevent allergy (2). Using intestinal cells in a petri dish, they tested whether an allergenic milk protein unique to cow’s milk (beta-lactoglobulin) could pass through intestinal cells in the presence of “low sIgA” breastmilk and “high sIgA” breastmilk.  The higher the sIgA, the less beta-lactoglobulin could get through the cells, meaning….  Importantly, sIgA levels had no effect on a control (dextran), suggesting the blocking was specific.  In the context of a baby, this would mean that less undigested beta-lactoglobulin is absorbed across intestinal cells and, therefore, there would be a lower chance of the baby developing an allergic reaction to beta-lactoglobulin.  This is probably not the end of the story, as other immunoregulatory mechanisms are likely at work.

In the meantime, the take-home message is this: breastfeeding mothers, who are not allergic to milk, should drink cow’s milk.  There is no evidence to discourage it and some evidence that it may protect the nursing infant.  Dear Mothers: when friends freak out, keep calm, drink on.