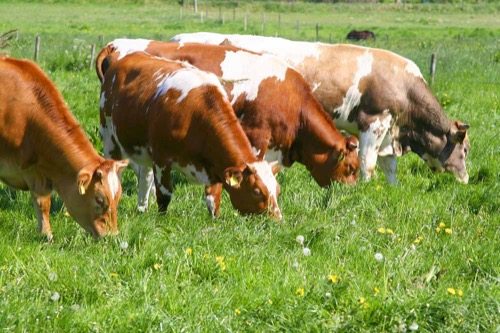 It’s a tough gig being a cow. Productivity expectations for meat and milk are high, and at the same time, the cow gets a bad rap for belching a potent greenhouse gas, methane, which is a by-product of its digestion. Some people say it’s like driving a car very hard on a winding mountain road and then complaining about the car’s increased exhaust gas emissions. Reducing emissions and fuel consumption while maintaining performance is the golden ambition of car manufacturers. A similar goal is also true for the cow. People in many government agricultural agencies and the Food and Agriculture Organization (FAO) want the beef and dairy industries to use more productive cattle emitting less methane and using less feed i.e., increasing industry production efficiency while decreasing its environmental footprint [1-4]. It’s a tall order seemingly resisted by the realities of cow biology, however recent ground-breaking research may have opened new opportunities to meet these ambitious aims [5].

Methane emission from belching cows may be modifiable by changing a specific population of microbes in the cow’s rumen, according to a large group of international investigators belonging to the aptly named RuminOmics research project [5]. The rumen is a large compartment in the cow’s stomach where most of the digestion of forage occurs. In particular, the investigators suggested that livestock could be selectively bred to contain specific rumen microbes producing lower levels of methane. Their research is timely and it potentially has important implications for decreasing methane levels in the atmosphere.

Methane Is a By-Product of Digestion

The digestive system of ruminant animals is amazing. Ruminants are hoofed mammals like cows, sheep, and goats that continually rechew their ingested feed. These animals efficiently convert pasture into nutrient-dense meat and milk for human consumption. The survival of humans over the ages has been tightly intertwined with the hunting and domestication of ruminant species, which provided humans with a reliable, mobile, and highly nutritious food source [6]. Today, the human population still relies on ruminants as a primary food source. Importantly for humans, ruminant animals can often prosper on plant fiber obtained from pasture growing on semi-arid land that is unsuitable for other agricultural purposes. The cellulose in plant fiber contains a lot of energy, but ruminants need help from microbes to tap into it.

The cow stomach has four large compartments, the reticulum, omasum, abomasum, and rumen. The rumen is where most of the digestive action occurs. Its volume is large, about 150 litres (40 U.S. gallons), and each milliliter of rumen fluid contains billions of microbes [7]. Thus, the cow rumen holds an astonishing number of microbes called the rumen microbiome. The complex microbial ecosystem in the rumen efficiently digests plant fiber in the absence of oxygen to produce small molecules that provide the cow with essential nutrients and energy.

The microbial ecosystem in the rumen contains a huge diversity of microbes including, in order of abundance, bacteria, archaea, ciliated protozoa (moving single cells that have a nucleus like animal cells), and fungi [8]. The archaea are single-celled organisms with similarities to bacteria, but they also have important metabolic differences. The bacteria, protozoa, and fungi work together using a fermentation process to degrade ingested forage and convert it into chemical energy for their use. These microbes also produce small fatty acids as side products of the fermentation, which are absorbed by the cow for use as its primary energy source.

The microbial fermentation process in the rumen also produces carbon dioxide and hydrogen gas, which are used by some of the archaea (hydrogen is their energy source). An important by-product of archaea metabolism is methane, which the cow releases into the atmosphere by belching. The emission of methane also represents wastage of up to 10% of the total energy in the cow’s ingested feed [2]. Less energy means less meat and milk. Thus, decreasing methane emission from the cow could be good for the atmosphere and could also improve dairy cow productivity. The key to decreasing methane emission from the cow is to decrease some of the archaea microbes in the rumen.

The FAO estimates that there are about 3 billion domesticated ruminants in the world [1] that release approximately 100 million tons of methane into the air each year [2, 9]. Most of the methane emission comes from about 1.5 billion beef and dairy cattle [2]. Over the next 30 years, the FAO predicts a doubling of global demand for meat and milk as the human population heads towards ten billion people [9, 10]. The extra food demand will require increased numbers of ruminants that further increase the level of methane in the atmosphere [9]. The numbers are all big, getting larger, and demanding attention. So, why is there such a fuss about methane?

Methane is approximately 30 times more potent than carbon dioxide as a greenhouse gas [2, 9]. On the brighter side, the lifetime of newly emitted methane in the atmosphere is only about ten years while the carbon dioxide lifetime is 100 years [9]. A decrease in methane emission from ruminant animals can have relatively rapid beneficial effects on the load of greenhouse gases in the atmosphere. Consequently, strategies for methane abatement from ruminant livestock industries are a high priority of many government agencies [1, 2, 11-13].

A large group of scientists from eight countries recently published their new and innovative insights into the complex microbial communities present in the cow rumen [5]. The first author on the publication is John Wallace from the University of Aberdeen. Their research, published in Science Advances, highlighted international cooperation at its best. The investigators’ aims were first to determine whether cow genetics regulates the different populations of microbes in the rumen, and secondly to identify the specific microbial populations in the rumen that affect cow productivity traits and methane emission. This milestone investigation used more than 1,000 Holstein and Nordic Red dairy cattle from the U.K., Italy, Sweden, and Finland.

Wallace and colleagues made detailed measurements on the cows for milk output and composition, feed intake and digestibility, blood plasma components, and methane and carbon dioxide emissions [5]. The different types of microbes in the rumen (the rumen microbiome) and the genetics of the cows were also determined. The investigators showed that the cow population contained substantial genetic variation, which potentially could contribute to production trait differences between individual cows. Wallace and colleagues generated an enormous amount of data. The investigators first identified a core microbiome consisting of about 500 microbial species. The core microbiome is a population of microbes that is present in at least half of the cattle population. It only represented a tiny percentage of the total diversity of microbial species present in the rumen, yet the core microbiome was highly abundant in terms of microbial numbers. Wallace and colleagues used information from other published studies to conclude that this core microbiome is characteristic of most other ruminants. Hence, many of their research conclusions may also apply to other ruminants, especially beef cattle.

The investigators discovered mathematical correlations between a subset of the microbial species in the core microbiome and genetic differences in the cow population [5]. This was a remarkable and important discovery as it inferred that cow genetics somehow determined the presence of particular species of microbes in the core microbiome of the rumen. Hence, cow genetics potentially indirectly influenced the microbial metabolic activity of rumen. How this occurs is still a mystery. More specifically, Wallace and colleagues pointed out that some microbial components of the “inherited” core microbiome were already implicated in differences in methane emission in individual cows.

Wallace and colleagues used advanced computational analyses to determine whether there were associations between the microbial composition of the core microbiome and the various dairy production trait measurements [5]. They struck gold and discovered that components of the core microbiome were linked to many of the cow production measurements including milk output and milk composition. Some of the links were surprisingly strong while others were weaker. The investigators had linked together cow genetics, various cow production traits, and components of the core microbiome in a triangle of interdependent new knowledge. In particular, the investigators identified a “heritable” component of the core microbiome that was linked to methane emission. There have been hints from other researchers that cow genetics influences methane emission [14-16]. However, the study performed by Wallace and colleagues was the first comprehensive and detailed analysis. The race must be now on by scientists to discover the mysterious cow genes that affect the methane-generating microbes in the core microbiome in the rumen.

Wallace and colleagues’ provocative conclusion is that it may be possible to breed cattle with optimal rumen microbial populations that potentially maintain the high production performance of dairy cows but emit decreased quantities of methane [5]. This strategy would generate a permanent decrease in methane emission from the selectively bred cattle. The investigators also noted that a more rapid but non-permanent decrease in methane emission could also be achieved by early-life inoculation of the calf rumen with key populations of the core microbiome. Wallace and colleagues suggest that the broad application of these collective approaches in all ruminant livestock animals “should result in a more efficient and environmentally friendly ruminant livestock industry.” Cows are about to go green.