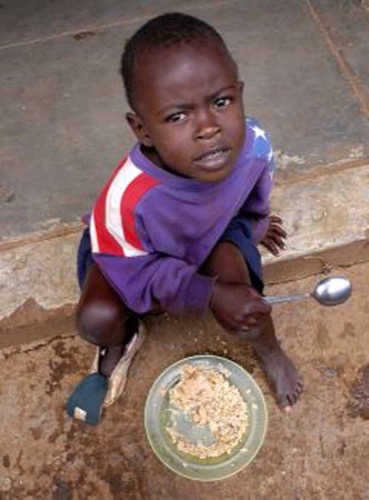 Childhood malnutrition is a major global problem that can lead to severe growth stunting and causes more than 3 million deaths every year [1]. Efforts to develop therapeutic foods to counteract the effects of malnutrition have had limited success.

A new study, conducted by David Mills at the University of California at Davis and Jeffrey Gordon at Washington University School of Medicine and others, finds that diets supplemented with specific milk sugars helped to promote growth and metabolic processes in germ-free animals that were transplanted with microbes from malnourished children [2]. The growth improvements appeared to be mediated by the effects of sialylated sugars on gut microbiota.

Sialylated sugars are abundant in breast milk, and they have been associated with the development of gut microbiota and prevention of intestinal infections. The new study used sialylated sugars extracted from cow’s milk, where they are found at much lower concentrations, and the researchers suggest that this provides an opportunity for the dairy industry to produce these sugars.

“I think it’s a beautiful study that shows how milk components are key to growth, and also shows why breast feeding is so critical,” says Mills. “That also creates opportunities because you can use those same fractions to try to help kids that can’t get human milk,” he says. “It also shows that the microbiota of the developing child is critical to that growth as well, so it’s not just milk, it’s milk and the microbiota,” says Mills.

A crucial step will be to replicate the findings in humans. “Most importantly, we need to repeat these studies and move it to a human clinical trial,” says Mills. “What we need to do is try to get these into foods, into clinical trials, first for healthy kids, and then hopefully to help produce some durable changes in the kids who are malnourished,” he says.

Sugars found in breast milk, called human milk oligosaccharides (HMOs) are known to function as prebiotics and help establish gut bacteria that provide various health benefits [5-9]. Mills had been working on milk oligosaccharides from both humans and cows for about 15 years, when in 2010 he received a $100,000 grant from the Bill and Melinda Gates Foundation to test whether oligosaccharides could help malnourished children. In 2012, Mills was also one of the partners in an $8.3 million multidisciplinary effort funded by the Bill and Melinda Gates Foundation and led by Gordon to develop new ways to combat malnutrition in infants and children around the world.

Undernourished children are currently given therapeutic foods, “but they only work as long as the kids are eating the food,” says Mills. The researchers hypothesized that the reason the effects didn’t last was that the children’s guts didn’t have the appropriate microbes, perhaps because their foods didn’t contain key elements present in breast milk.

To examine the effects of sialylated sugars, the researchers transferred a collection of microbes from the stunted infants into germ-free mice that lacked pre-existing gut microbes. When these mice were fed a typical Malawian diet supplemented with sialylated milk sugars “they had a dramatic increase in lean body mass,” says Mills. “Then we went on to measure a variety of health measurements, bone and body size measurements, all of which were better just with this simple addition to the Malawian diet,” he says. “That was amazing.”

The researchers also repeated the experiment in germ-free pigs, whose digestive tracts are much more similar to the digestive tracts of humans. They found that the pigs experienced similar improvements in growth and metabolism when their diets were supplemented with sialylated sugars.

Mice that were fed an unsupplemented diet or one supplemented with a common plant-based prebiotic called inulin did not experience this growth effect. “As a matter of fact, not only did inulin not have that effect, but with inulin they gained fat body mass,” says Mills.

The researchers found that the sialylated sugars appeared to promote growth through their effect on gut microbiota. The primary gut bacteria that responded to the milk sugars turned out to be Bacteroides, which are known to feed on these sugars.

“The only problem was, the way Bacteroides eats these sialylated milk oligosaccharides, is they sort of eat them outside of the cell, because they only want to take in the parts that they care about, and then the other parts flow downstream,” says Mills. “Therein lies the double-edged sword of this study,” he says.

Cross-feeding bacteria that are pathogenic could end up causing more harm than good. “The lesson here is we have to be very thoughtful when we come up with solutions like this, because you could end up hurting an unfortunate child if you happen to cross-feed the wrong population,” says Mills. “You really need to understand the microbiota you’re feeding, or you need to put organisms in that can consume these downstream products,” he says.

In follow-up work, Mills plans to examine ways to prevent cross-feeding. In the current study, the researchers did not put the entire spectrum of microbiota from undernourished infants into germ-free animals. Instead they used a representative cocktail consisting of microbes that could be cultured.

An opportunity for the dairy industry

Plant-based oligosaccharides such as inulin are already added as prebiotics to formula, and sialylated milk sugars could eventually play a similar role. Companies are looking at ways to produce synthetic oligosaccharides, but although individual oligosaccharides can be chemically synthesized, the comprehensive mix of these oligosaccharides is really only present in animal milk [10].

Using sugars extracted from cow milk could also have advantages when it comes to translating this research to humans. “It could be that these oligosaccharides which are naturally found in bovine milk and concentrated by filtration could have an easier regulatory path,” says co-author Daniela Barile at the University of California at Davis. Given that cow milk is already widely consumed and used to make infant formula, one would expect sugars extracted from it to be safe for human consumption.

Barile has been developing methods to extract milk oligosaccharides from cow milk, and specifically from whey, the liquid part of milk that separates from the curd during cheese production. Large quantities of whey are currently produced as a by-product of the cheese-making process, making it a useful source from which to purify milk sugars. Although milk oligosaccharides are present in much smaller quantities in cow milk compared with human milk, the researchers have been developing filtration techniques to increase the concentration of these sugars in whey [10].

Barile collaborated with the Hilmar Cheese Company to obtain the sialylated milk sugars used in the study. Given their much lower concentrations in bovine milk, the researchers had to concentrate them from large quantities of cheese whey. “It was really a big investment,” says Barile. “They produced on the order of 10 kilograms at a time, which is really unheard of, because these molecules are low abundance in bovine milk,” she says. “I think the take-home message for me is how low-abundance molecules in milk are very potent in their activity,” says Barile.

“Without the industry believing in this project, there would be no result,” says Barile. “Now more industries can read this paper and start investing in the technology to isolate oligosaccharides from bovine dairy streams, so I think this research is very meaningful and very timely,” she says.

“My hope is that this kind of very complicated study that clearly shows the benefit of this for kids in Malawi, would prompt the dairy industry to realize that they should start figuring out how to make this stuff, and testing it in other children,” says Mills. “If they have whey streams, even though this might be a very small percentage of a whey stream, if it’s very valuable then it’s worth going after,” he says. “When I think of all the yoghurt, and all the cheese being made, and I think of all those whey streams, I now start thinking ‘gee, I wonder how many oligosaccharides could we get from that, that are probably being thrown away,’” says Mills.

Mills says there might be parallels with the rise in production of whey protein. “Thirty to forty years ago dairies used to pay farmers to dump the whey on their fields,” he says. “Some academics pointed out to them that there’s a lot of good protein in there, and at the time, folks were resistant to spend money to go capture it because it was so dilute,” says Mills. “Of course now, some big companies make as much or more money on whey than they do on cheese,” he says. “So it’s a very valuable byproduct, and I wonder if we’re looking at the same thing again,” says Mills.