Colostrum Through a Cultural Lens 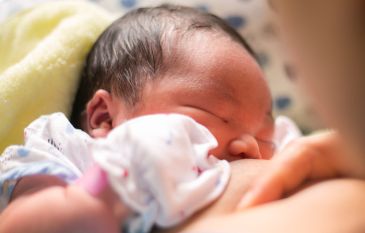 In the first hours and days after a human baby is born, mothers aren’t producing the white biofluid that typically comes to mind when we think about milk. They synthesize a yellowish milk known as colostrum or “pre-milk.” Colostrum is the first substance human infants are adapted to consume, and despite being low in fat, colostrum plays many roles in the developing neonate [1]. Historically and cross-culturally, colostrum was viewed very differently than it is amongst industrialized populations today.

A colossus is not just something large, it can be “something of great power, influence, or importance.” Colostrum, the smallest drops for the tiniest tummies, effectively fits this definition because of its substantial effects on organizing the infant’s health, metabolism, and microbiome. At birth, babies are first appreciably exposed to maternal and environmental microbes while they have relatively naïve and immature immune systems. During this neonatal period, infants have permeable intestines that facilitate transport of maternal-origin hormones into circulation.

Immune proteins are particularly enriched in colostrum compared with mature milk. Macrophages, a type of white blood cell, are enriched in colostrum, and function to engulf and “digest” microbes [2] like E. Escherichia coli [3]. Immunoglobulin A (sIgA), secreted at mucosal surfaces, defends against ingested pathogens [4] and is a particularly prominent immunofactor in colostrum [5]. Complex sugars attach to proteins, such as sIgA [6] and lactoferrin, that influence microbes that colonize the infant’s intestinal tract [7]. In one study, exposure to colostrum via mouth swabs in very-low-birth weight, premature infants in a Neonatal Intensive Care Unit changed microbial colonization of the oral cavity [8]. Additionally, the concentrations of growth factors in colostrum are higher than in mature milk [9-10] and underlie “lactocrine programming” of infant development during ephemeral windows of sensitivity [11].

In these ways colostrum is a medicine and a signal for the neonate while providing food for the microbes. During early neonatal days, infants lose weight as they mobilize fat deposited during fetal life to sustain energy [12], particularly among breastfed infants [13], until their bacterial buddies are on board to assist digestion and transitional milk is delivering more calories.

Modern scientific understanding of the role of colostrum for the neonate stands in stark contrast to the Western historical perspective of this “pre-milk” substance. In 1577, Heresbach’s 4-book series on animal husbandy, translated by Googe, provides an early record of the use of the term “colostrum” in English [14]. As the book cautioned, “you must be sure to milke out the fyrst milke called Colostra… for this, except some quantitie be drawen out, doth hurt the Lambe.” Before being called colostrum, early milk was called “bystings,” “biestings,” or “beestings” and was met with similar skepticism. Thomas Newton translated from Latin the 1577 health guide of Guilielmus Gratarolus that claimed “the thicke and curdie Milke… commonly called Biestings, is very dangerous” [15].

Indeed, throughout pre-industrial Europe, colostrum was perceived as dangerous, unhealthy, or harmful to the baby [16]. Some of the perceived disgust with colostrum likely originated due to the yellowish, viscous features shared with another fluid rich with immune cells—pus. Although such fluid at the site of an active infection is due to the substantial concentration of dead white blood cells, colostrum is packed with the richness of living immune cells that protect the infant and entrain the immune system [17]. Within Europe, this cautionary disdain for colostrum persisted for hundreds of years, but by 1737 Henry Bracken stated in his handbook on midwifery that “The Colostrum or first Milk is a medicinal Nourishment which Nature hath prepared for the Purpose that it should moderately nourish” [18].

No Country for Colostrum

Despite the scientific advances in decoding colostrum, across many human cultures, anthropologists and other ethnographers have documented colostrum taboos. In 1966, Dr. Dana Raphael’s doctoral thesis [19] explored what was then known cross-culturally about the timing of initiation of breastfeeding. Using the Human Relations Area Files, (HRAF), a database of cross-cultural information “to promote understanding of cultural diversity and commonality” established in 1949, Raphael identified 32 different societies in which breastfeeding was initiated 3–7 days after the infant’s birth. Expansion of the HRAF database has increased the number of societies known to have some degree of colostrum taboo. Of the 120 different cultures for which information about timing of breastfeeding initiation was available, in 50 cultures, 41%, initiated breastfeeding after 2 days post-partum [20].

In previous generations, initiating breastfeeding several days after parturition was reported as customary among many peoples across the globe—from the Dard, Burusho, Gujaratis people in regions of Afghanistan, Pakistan, and India, to the Nupe and Hausa people of West Africa, to the Mongo of Central Africa, the Khoikhoi of Southern Africa, the Tuareg people of the Sahara, among the Tübatulabal, Ojibwa, Creek, Navajo, and Tarahumara of North America, and the Jivaroan peoples along the Marañon River in South America, the Manus of Papua New Guinea, and among Pacific Islanders from Samoa, Marquesas, and Marshall Islands [21]. Dr. Mel Konner, having conducted extensive research among the Zhun/Twasi (known among Westerners as the !Kung), reported in 1972 that “the infant is not put to the breast until the colostrum has run out” [22]. Among Mithila, women in India within the Ayurvedic tradition state that “A mother’s ‘real’ milk is not ready at the time of her child’s birth; rather it comes 2 or 3 days later when heat in her body transforms ‘water’ into milk” [23].

Colostrum taboos reflected the perception that colostrum was dangerous—the Aka people of Central Africa caution that ““First milk,” contaminated liquid from pregnancy, can make infants sick and die” [24]—or problematic—as warned by the Marquesan Islanders “if a mother nurses her infant immediately (after birth), the child will be difficult to raise” [21]—or disgusting—“colostrum is a foul substance that oozes from the breasts… like pus” [23]. In some cultures, postponement of nursing is to afford mothers time to recover from the exertions of labor and delivery [20,23].

Within some of these traditional contexts, during the period in which the neonate was denied colostrum, infants would be breastfed by another woman [21]. Among the San people of Southern Africa, lactating women who were producing mature milk would suckle the neonate [21]. In Iran, a woman who was rearing an infant of the same sex as the neonate would provide milk [19]. Among the Iatmul of Papua New Guinea, a woman who recently delivered a baby, and who was likely synthesizing transitional milk, would breastfeed the newborn during the colostrum taboo [19]. British Colonel John Biddulph traveled widely in the Himalayas and reported in 1880, that among the Ashimadek clans in the Chitral region of modern day Pakistan, infants were nursed by all lactating women in the community [25]. In this way, the denial of colostrum in many cultures was made possible by allomaternal-nursing and cooperative care of infants [26-27]. Although milk sharing has received increasing research effort [28-29], biocultural studies of allo-maternal nursing have remained rare [30].

When milk from another woman was not available, or allo-maternal nursing was not practiced, other milks or gruels were commonly prepared for the infant [19-21]. In pastoralist cultures that have colostrum taboos, the newborn can be fed cow’s or more often goat’s milk. In other cultures infants were, and sometimes still are, fed a specially prepared gruel consisting of water mixed with mashed, ground, pounded, or stewed solids such as sugar, molasses, butter, coconut, flour, breadfruit, maize, herbs, pollen, acorn, piñon, seeds, taro, or roots [20-21]. These newborn gruels reflect the subsistence practices and local ecology of the respective peoples [20].

Relatively limited biomedical research effort has been allocated to directly investigating the health consequences of colostrum taboos among traditional societies. One rare example found that children in Gujarat State, India who were denied colostrum were significantly more likely to be two standard deviations below weight for age and height for age than were infants who breastfed shortly after birth [31]. Without more such studies, the primary option is to extrapolate from studies in which infants are exclusively breastfed or exclusively formula-fed from birth in industrialized populations, which may poorly approximate the context, ecology, and dynamics that characterize an appreciable proportion of human cultures. The immediate concern is the impact on infant immune, microbial, and gut function and maturation. Additionally, given that milk flow through the mammary gland during the first post-natal days influences milk production weeks later [32], colostrum taboos may lower capacity for milk production later in lactation. The health implications of these cultural practices are myriad, and the magnitude of the consequences remains poorly understood.

Public Health in the Context of Colostrum Taboos

Across every human society, motherhood and childhood are deeply embedded within social relationships and cultural identity [33]. For those communities characterized by traditional cultural practices that include colostrum taboos, advocating for optimal breastfeeding practices or public health interventions presents challenges [34]. Many of the populations discussed here are in nations that have relatively higher infant mortality [35] and traditional communities may experience even greater pathogen risk and more limited access to health care. Such conditions increase the impetus to motivate people to adopt best practices for the neonatal period. In order to productively achieve these public health goals, building partnerships within the community and demonstrating cultural competence are essential [36-37]. Morse and colleagues recommended that health care practitioners “should determine the mother’s beliefs and cultural practices concerning colostrum and early infant feeding” and determine whether education can be used to sustainably shift cultural practices [20]. Importantly, mothers who decline to breastfeed during the immediate post-partum period due to colostrum taboos may actually have every intention to breastfeed subsequently.

Notably, many of the citations presented in the present essay reflect cultural practices of previous generations, rather than a cross-sectional snapshot of current prevalence. Indeed, using the search term “colostrum taboo” time restricted from 2006–2016 in Google Scholar yielded no articles. Other search approaches suggest that global health efforts are having an impact. Fewer than 20% of Turkish infants were denied colostrum for the first 24 hours after birth [38]. Among women in Gujarat State, India more infants are nursing in the first post-natal hours, and fewer than 25% of infants are denied colostrum, a substantial improvement from earlier studies [31]. However, elsewhere in India, denial of colostrum remains prevalent [39] and is still practiced among some traditional societies [24].

Many scholars and clinicians, especially at the forefront of promoting and facilitating skin-to-skin and early latch, are likely doing a double take reading about these cultural practices. Many may have encountered them due to human migration and cultural diasporas. Morse and colleagues caution medical health practitioners that assessment is essential before interventions [20]. Attempts “at ‘correcting’ a cultural belief may alienate the mother from the caregiver or the health care service” and ultimately do harm. Moreover, depending on household composition and power dynamics, messaging about optimal practices for infant health may require including grandmothers and aunties who are socially enforcing traditional customs [34,39]. Addressing these issues has been and will be most effective at the intersection of the life sciences, social sciences, and global health practice.