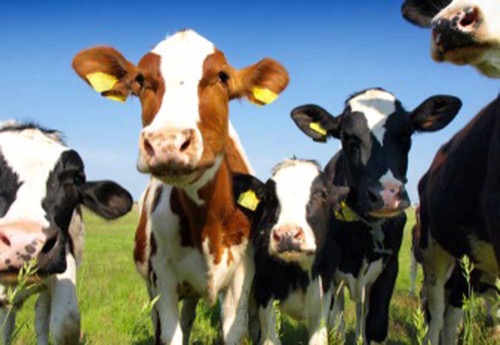 You may be surprised to learn that you can have many more copies of a particular gene than your neighbor, and yet you both still function like normal human beings (or not!). With each new generation of cows (or humans), DNA is copied from parents to offspring. During this copying process, whole segments of the genome can be missed or duplicated such that the offspring have fewer or more copies of the segment than normal. This variation in the number of copies of a genomic segment is called “copy number variation” (CNV). Just as for other forms of genetic variation, CNVs can be linked to or actually cause a physiological change that is seen as a different phenotype.

CNVs have attracted more attention as the details of genome sequence have been revealed. First, it became clear that the genome had very large numbers of this kind of variation. Researchers discovered that these variants could account for phenotypic variation of interest for health and production characteristics. In a recent paper by Xu et al, CNVs were investigated in dairy cattle. This study showed that CNVs were linked to milk production traits [1].

Most studies of genetic association in dairy cattle over recent years have focused on analyses that use single nucleotide polymorphisms (SNPs) as a means of defining variation between individual animals. The advantage of using SNPs is that they could be mined more easily from large scale DNA sequence data. Furthermore, they are distributed at relatively regular intervals across the genome, thereby providing good coverage to analyze association with traits from all regions of each chromosome. The very large majority of SNPs are functionally silent. That is, they have no direct effect on biological variation, but may be genetically linked to nearby mutations that do have an effect. This linkage has been used to great success in many genome-wide association studies in cattle, as well as other species. Meanwhile, scientists interested in functional genomics have been following the SNP leads to undertake the more painstaking task of trying to relate positive associations to physiological outcomes. There has been debate on the need to identify such links in dairy cattle, where the primary purpose is to use genomic information for selective breeding, which is advancing on the basis of SNP analysis. However, it now seems likely that the accuracy of this approach will erode more rapidly with each generation than initially thought. So, researchers continue to look for functional interpretation of genetic association data. One way to achieve this using large-scale analysis is by looking at CNV data.

Based on this rationale, Xu et al., first undertook an analysis of CNV location in more than 26,000 dairy bulls and cows from the Cooperative Dairy DNA repository, the National Center for Genetic Resource Preservation, ARS, and the USDA. They identified 99 CNVs for further association analysis with five dairy traits. From this analysis, they found that 34 were significantly associated with at least one of the five traits: milk yield, milk protein yield/percentage or milk fat yield/percentage. Some of these were clearly present at very high frequency in the tested animals, indicating that they have been under positive selection in the past. When the scientists compared their results to other research results that have been published, they found that they were strongly supported in other international dairy herds. They were also interested in determining whether analysis using SNP versus CNV gave the same information. Many CNVs were captured by linkage to SNP that were located close to the CNV site, but 25% were not captured using the commonly used Bovine50SNP method. This may partially explain why it has been difficult to identify the heritability of milk production traits using SNPs alone.

When trying to determine what lies behind a champion dairy cow, looking at CNVs may be a winner. The dairy industry is now moving beyond the Bovine50SNP chip, and should consider including CNVs while developing any new tests. Each year, scientists get a little closer to understanding why one cow produces more or different milk from its neighbor.