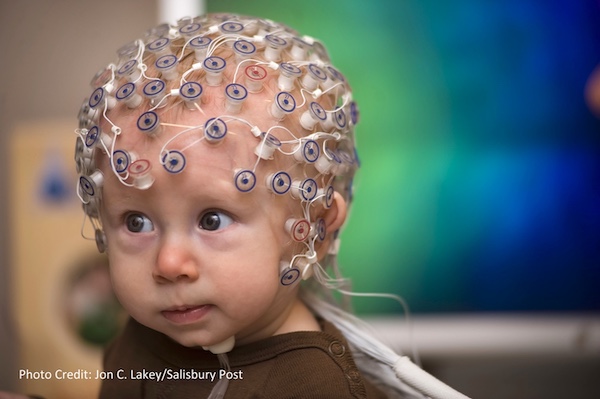 Choline is an important vitamin-like nutrient that was officially recognized as an essential nutrient in 1998 [1]. It is an important structural component of our cells, as it is part of molecules called phospholipids that are abundant in our cell membranes. It is also important for the synthesis of the neurotransmitter acetylcholine, which is involved in memory and muscle control. Choline deficiency is thought to contribute to liver disease, atherosclerosis, and neurological disorders [2].

Choline is present in human milk, and is especially important for fetal and infant development [2,3]. “The hint that choline is important for infant development comes from the fact that in human milk, the supply of choline remains constant across the first year of life,” says Professor Carol Cheatham from the University of North Carolina at Chapel Hill. Other important nutrients, such as docosahexaenoic acid (DHA), are present in large quantities initially, but often level off after a few months.

Given its importance in development, studies have suggested that pregnant and lactating women should ensure they consume adequate choline in their diet [3]. “It has been shown that eating choline will increase the choline in the breast milk,” says Cheatham. The richest food sources for choline are of animal origin, including milk, meat, and especially eggs.

Prenatal vitamin supplements do not contain sufficient choline, and studies have suggested that about a quarter of women in high-income countries and most women in low-income countries consume too little choline in their diet [3]. “We know that pregnant women in America are not consuming enough choline, so we need to increase that a bit,” says Cheatham. Having too little choline can have dire consequences. Women in the United States with diets lower in choline content are at significantly greater risk for having a baby with a neural tube defect or an orofacial cleft than women with diets higher in choline content [4,5].

Formulas derived from non-animal sources, particularly soy, have lower total choline concentrations than human milk, and the US Food and Drug Administration (FDA) requires that infant formula not made from cow’s milk be supplemented with choline [6]. “There is choline in most infant formulas now,” says Cheatham. Most formulas also contain two other nutrients that work with choline, DHA and lutein. “They have the big three in there now,” she says.

That’s a good thing, because choline may be crucial for infant brain development, and may work in conjunction with DHA and lutein. Cheatham found that choline played a particularly important role in memory, and acted in synergy with DHA and lutein [7]. “I think our study showed really good evidence that choline is very important to the brain, either by having its own action or because it assists the actions of other nutrients,” says Cheatham.

Previous studies in animals found that choline had some effects on cognition, but the results in humans have been mixed. There were some studies in adults that reported better cognitive function in those that ate diets higher in choline, but how choline might influence cognition in children was still unclear [8].

Cheatham wondered if the inconclusive findings of different nutrient studies might be because a lot of them looked at nutrients individually, rather than in combination with other nutrients. “I started getting interested in synergy between nutrients because I’ve been looking for potential reasons why we find effects in some studies but not in others,” she says.

Cheatham became interested in the synergistic effects between choline, DHA, and lutein due to the fact that they often appear together in nature, such as in eggs and in human milk. “These are always seen together, so you know that they must be working together,” she says.

Previous research indicated that these three nutrients might act in synergy [9,10]. DHA is known to work in concert with choline and other nutrients to improve synapse formation and cognition [11,12]. Some studies also suggested that DHA and lutein are independently associated with cognition [4,9,13-15]. “The three of them together are like the secret sauce of brains,” says Cheatham.

Cheatham and her colleagues decided to assess the influence of human milk choline, DHA, and lutein on the recognition memory abilities of six-month-old infants. They first analyzed human milk samples obtained three to four months postpartum for fatty acids, lutein, and choline. Then, at six months they invited participants to an electrophysiology session to test the infants’ recognition memory.

“Obviously a six-month-old can’t tell you what he or she remembers,” says Cheatham. Instead, the researchers used scalp electrodes to record the electrical activity of the infants while they watched a computer screen. “We record that electrical activity, but we time lock it to an event that’s happening on the computer screen in front of the baby,” she says. “So, they’re just sitting on their mom’s lap in front of the computer, passively watching pictures, and we get really good wave forms that are related to whether or not the infant brain is processing the information in front of them or not,” says Cheatham.

The researchers showed the babies one picture 12 times to familiarize them with it, before showing them 100 pictures. “Seventy of them will be the familiar picture and 30 of them will be brand new things that they’re seeing one time each,” she says.

“We get really nice wave forms that will show that if it’s a familiar picture, no processing is necessary, but if it’s a novel picture, you get this really nice deflection in the data that shows processing,” says Cheatham. “We can use this to estimate the speed of processing, how well information is flowing across the synapse from neuron to neuron,” she says.

The researchers found that higher choline levels with higher lutein levels were related to better recognition memory. “So, lutein was working with choline to improve speed of processing in the infant brain,” says Cheatham. Similarly, DHA and choline appeared to work together, with high choline and high DHA associated with better recognition memory.

Cheatham is planning larger follow-up studies to look at choline and its synergistic interactions in more detail. “In order to prove the synergy, you have to prove that both nutrients together are better than the single nutrients,” she says. “So, the study design would be to supplement some moms with DHA, some moms with choline, and some moms with both DHA and choline,” says Cheatham. These follow-up studies could also collect information on maternal diet, and could look at the three-way interactions among choline, DHA, and lutein.

Cheatham and her colleagues conclude that choline, in synergy with lutein and DHA, plays an important role in infant cognition and memory. But there’s a lot left to learn about the role of human milk choline in infant development. “Rest assured that the work is continuing,” she says.